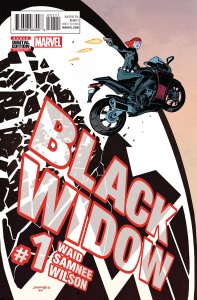 In the world of espionage fiction, it’s not all that unusual for the main character to be on the run from their own spy agency. Mission Impossible has even done this twice now, and Ed Brubaker’s Velvet comic series is another great example. That doesn’t mean this type of story can’t have plenty of different types of stories to tell within this trope. The new Black Widow series, co-written by Mark Waid and artist Chris Samnee, is off to a fun start.

This issue is the quickest read I’ve seen in a while, but that’s not a bad thing. The entire issue is an intense action scene that involves skydiving, motorcycles, and fist fights. There isn’t much dialogue, but dialogue would actually slow this comic down. Everything we need to know is explained early on – Natasha took something and now all of SHIELD is after her.

Samnee’s art is simple, but effective. There’s a classic feel to everything, with simple backgrounds, motion lines and exaggerated sound effects. The action flows well, with each panel clearly showing what Natasha is doing, and facial expressions that perfectly portray both Natasha’s thought process and the reactions of those chasing her. Matthew Wilson’s colouring is also good. The helicarrier is bright and colourful, while the city streets are appropriately brown. In the fight scene at the end of the issue, everything is tinted red to emphasize the brutality behind the fight.

It’s hard to say this comic is great when it’s such a short read, and a 20-page action scene at that. That said, it sets up what could be a great story. Black Widow fans should pick this up, and those who are interested in an espionage series taking place in the Marvel Universe should at least look into this.

I am a relatively new comic book fan writing this blog for other new comic book fans and/or people who are interested in comics but don't know where to start. I've always been interested in writing, to the point where I have a college Creative Writing Certificate and I'm currently a year 2 Journalism student. I also have another blog where I mostly make fun of bad movies - www.healed1337.blogspot.com As for how I got into comics, I've always had a passing interest in superheroes: most notably Batman, Spider-man and the X-Men. Until February of 2011 (I think,) my only experience with any of these franchises came from the movies and video games. Shortly after I bought Marvel Vs. Capcom 3 however, I decided to check out X-23, Wolverine's female clone. I ended up reading her Innocence Lost origin story and enjoyed it. From there, I started reading various X-Men comics and it quickly exploded into my newest hobby. My other interests/hobbies include video games, movies, music, playing sports, my dogs and weird news.
View all posts by healed1337 →
This entry was posted in comic, comic review and tagged all new marvel, black widow, chris samnee, comic review, comics, hellicarrier, mark waid, marvel comics, matthew wilson, natasha romanova, SHIELD. Bookmark the permalink.