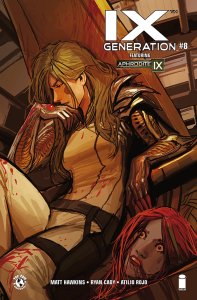 The previous issue of IXth Generation released early in December of last year. That makes this 3 months since the last entry. I’m not sure what’s going on behind the scenes to cause such a delay, but this is also the final issue of IXth Generation, an epic science fiction story that began with Aphrodite IX 1 several years ago (Free Comic Book Day 2013 to be exact). It’s been an epic story about a cyborg who woke up in a post-apocalyptic world with no memory, and ended up being a part of a family of 9 cyborgs that eventually declared war on each other.

On the one hand, the story in this issue is great. Co-written by Matt Hawkins and Ryan Cady, it concludes every loose plot thread in this series, which combines a very interesting post-apocalyptic world, twisted politics, moral issues and artifacts mythology from the Top Cow Universe. There’s a lot of intense action that works really well, and some of the dialogue is great. It’s also refreshing to see a megalomaniac villain (the chairwoman) who doesn’t have some sort of speech where she explains her plan. Instead, Hawkins saves it for the extra material after the issue ends, yet the way the story works, you can figure out most of it as the story moves on. The conclusion isn’t entirely clear as to what happened, but there’s also a promise that at one point or another, Aphrodite IX will return, and there is a strong emotional impact with the ending itself.

That said, this issue feels rushed, even for a double-sized comic. There’s a lot packed into this double-sized issue. There’s the chairwoman’s trap as part of her hopes to resurrect herself, several major death scenes and a montage that skips over a couple centuries of conflict between Aphrodite IX and the chairwoman. Although this comic is never hard to follow, there isn’t enough room for some moments to breathe, and they lose some of their emotional impact as a result. This issue feels like it would have worked better as a 4-issue arc, with the last 7 pages being one issue on its own and more time between battles to let emotional moments happen. Instead, there’s only time for a couple panels for Aphrodite to mourn the loss of her closest friend from the family, Hephaestus IX.

The art by Atilio Rojo is great. The action scenes feel big, with plenty of detail on the large-scale carnage and the debris flying around. There’s just the right level of brutality, whether it’s Ares IX being thrown through several walls, monsters being decapitated or all the explosions in the atmospheric battles. Facial expressions perfectly capture characters’ emotions, including Velocity’s anger, the pain in characters’ eyes as they’re slaughtered and Aphrodite’s mix of confused emotions when … I won’t spoil the ending.

Despite my complaints about this feeling rushed, IXth Generation 8 is a great comic. At this point it’s very difficult for new readers to understand what’s going on, but this, together with Aphrodite IX, is a fantastic Science-Fiction series. It starts off as a conflict between genetically altered humans and cyborgs with Aphrodite caught somewhere in the middle, and grows into a massive epic between a family of cyborgs specifically engineered to rule the post-apocalyptic world. If that sounds the least bit interesting to you, be sure to check these titles out. Of course if you’ve been reading and enjoying IXth Generation, you should pick this up.

I am a relatively new comic book fan writing this blog for other new comic book fans and/or people who are interested in comics but don't know where to start. I've always been interested in writing, to the point where I have a college Creative Writing Certificate and I'm currently a year 2 Journalism student. I also have another blog where I mostly make fun of bad movies - www.healed1337.blogspot.com As for how I got into comics, I've always had a passing interest in superheroes: most notably Batman, Spider-man and the X-Men. Until February of 2011 (I think,) my only experience with any of these franchises came from the movies and video games. Shortly after I bought Marvel Vs. Capcom 3 however, I decided to check out X-23, Wolverine's female clone. I ended up reading her Innocence Lost origin story and enjoyed it. From there, I started reading various X-Men comics and it quickly exploded into my newest hobby. My other interests/hobbies include video games, movies, music, playing sports, my dogs and weird news.
View all posts by healed1337 →
This entry was posted in comic, comic review and tagged angelus, aphrodite ix, atilio rojo, chairwoman, comic review, comics, cycborgs, Hephaestus IX, image comics, matt hawkins, post-apocalyptic, ryan cady, sci-fi, science fiction, the darkness, top cow productions, velocity, witchblade. Bookmark the permalink.