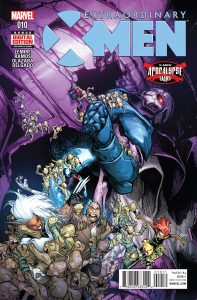 This series frustrates me. On the one hand, Extraordinary X-Men’s writer Jeff Lemire is capable of great storytelling. His All-New Hawkeye run was short but effective, and it feels like a complete story. His Old Man Logan run is very good so far. His Animal Man run for DC is phenomenal. From what I’ve seen of his writing though, he’s far better at solo titles than he is at team books. While the end of his Justice League United run was enjoyable, it took way too long to pick things up. This series seems to be taking even longer.

There are parts of this issue that work really well. Magik’s scene with the young mutant, Sapna, is charming and gives us some great Magik characterization. The brief light-hearted moments in the main story are well-written as well, like when Glob tries to talk to Jean Grey in a break between fights. Jean herself gets to show off her powers in a glorious moment. These moments are held back by an over the top hopeless feel that both this story arc and the series as a whole suffer from.

The terrigen mist negatively affecting the mutants already feels like a rehash of the Legacy Virus and Decimation combined, but this Apocalypse Wars story in a post-apocalyptic future only makes it worse. Storm’s breakdown may be well-written, and Iceman trying to cheer her up does help, but these kinds of stories are becoming stale for the X-Men franchise. Apart from how the X-Men team seems to be stuck in the future and Colossus is a horseman of Apocalypse, there isn’t much depth to this story arc yet.

Humberto Ramos’s art is equally frustrating. Pushing aside whether you like cartoonish art or not, some of Ramos’s art works really well. The environmental establishing panels are very well detailed. The panels with X-Haven hiding in the rocks of Limbo, complete with floating towers and the plant life surrounding the building in an otherwise fiery red cave looks fantastic. The pages where the X-Men are searching through one of the domes in the future, complete with rubble, support beams and the fallen Galactus feel huge in all the right ways. Jean Grey actually looks great, and facial expressions do a good enough job at conveying emotions. On the downside, some character proportions are way out of hand, like Old Man Logan’s arms being thicker than his head, and Colossus is even worse. The size of the opponent on the last page is absolutely ridiculous and proportionally impossible. Edgar Delgado’s colouring is really good though. There’s a great balance of making this comic bright and colourful while also using shading to emphasize the dark mood of the future half of the story while the scene between Magik and Sapna is just pretty.

As mixed as this issue is, I’m not quite ready to drop this series yet even if it is on my short list. There are glimpses of Lemire’s great writing qualities hiding in this otherwise frustrating read. If you’ve been enjoying this series so far you’ll most likely enjoy this issue. If you’re on the fence like me, this issue won’t change your mind, and if you haven’t checked this series out yet, I’ll just say wait and see.

I am a relatively new comic book fan writing this blog for other new comic book fans and/or people who are interested in comics but don't know where to start. I've always been interested in writing, to the point where I have a college Creative Writing Certificate and I'm currently a year 2 Journalism student. I also have another blog where I mostly make fun of bad movies - www.healed1337.blogspot.com As for how I got into comics, I've always had a passing interest in superheroes: most notably Batman, Spider-man and the X-Men. Until February of 2011 (I think,) my only experience with any of these franchises came from the movies and video games. Shortly after I bought Marvel Vs. Capcom 3 however, I decided to check out X-23, Wolverine's female clone. I ended up reading her Innocence Lost origin story and enjoyed it. From there, I started reading various X-Men comics and it quickly exploded into my newest hobby. My other interests/hobbies include video games, movies, music, playing sports, my dogs and weird news.
View all posts by healed1337 →
This entry was posted in comic, comic review and tagged all-new marvel, apocalypse, apocalypse wars, bobby drake, colossus, comic review, comics, edgar delgado, extraordinary x-men, glob, Humberto ramos, iceman, illyana rasputin, jean grey, jeff lemire, magik, marvel comics, old man logan, ororo munroe, pitor rasputin, storm, x-men. Bookmark the permalink.