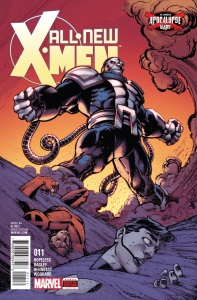 With this issue out, the first of the Apocalypse Wars tie-ins (and ironically the last to begin) ends. Young Beast and Evan (Apocalypse’s heroic clone) are trapped in ancient Egypt. While Beast is captive by those working for Apocalypse’s father, Evan is hanging out with Apocalypse as a child, who is much more innocent than he eventually becomes. It’s a great look at Apocalypse’s very early years, but unless you enjoy Beats and Evan, this issue won’t be for you.

Written by Dennis Hopeless, All-New X-Men 11 begins with Apocalypse rushing to save Beast from Mystic, who’s working for Apocalypse’s father, Baal. Surprising pretty much no one, it ends up being a trap, where Mystic warps Apocalypse away to begin some sort of spell. It seems to be the true beginning of En Sabah Nur’s transformation to the Apocalypse he will eventually become. For Evan, this is a great character study that will likely challenge his view of himself, when he started this story arc conflicted. It also drives a conflict between himself and Beats that could potentially shake up the team dynamic. Although Beast is still far more ethical than his older self, it shows the potential for him to start going down the same dark past.

Mark Bagley’s art is good. Evan and young Apocalypse look very similar, but different save for Evan’s hair and the makeup on En Sabah Nur’s face. They even make the same facial expression when they see Beast tied up at the ambush point, a nice touch. Facial expression do a good job at conveying emotion, while also showing Beast’s fatigue when they first rescue him. Not every panel has much of a background, but when there is, it’s well detailed, whether it’s the mountains in the distance or Mystic’s tent full of pots, maps and messy tables. The fight scene between Evan and Baal makes good use of Evan’s powers and it flows well. Nolan Woodard’s colouring is also good. Even though the entire comic takes place at night, there’s a good variety of colours, and the purple tint helps the sinister mood of this issue.

The writing in this comic is good, but how much you enjoy it depends on how much you like Evan and Beast, or how interested you are in learning more about Apocalypse’s past. It probably would have been better to bring more of the All-New X-Men into the past to experience this adventure, especially when so many issues lately have focused on one or two characters, leaving the rest in the background. Still, this story is a decent road trip arc, which hopefully means that All-New X-Men is getting back on track.

I am a relatively new comic book fan writing this blog for other new comic book fans and/or people who are interested in comics but don't know where to start. I've always been interested in writing, to the point where I have a college Creative Writing Certificate and I'm currently a year 2 Journalism student. I also have another blog where I mostly make fun of bad movies - www.healed1337.blogspot.com As for how I got into comics, I've always had a passing interest in superheroes: most notably Batman, Spider-man and the X-Men. Until February of 2011 (I think,) my only experience with any of these franchises came from the movies and video games. Shortly after I bought Marvel Vs. Capcom 3 however, I decided to check out X-23, Wolverine's female clone. I ended up reading her Innocence Lost origin story and enjoyed it. From there, I started reading various X-Men comics and it quickly exploded into my newest hobby. My other interests/hobbies include video games, movies, music, playing sports, my dogs and weird news.
View all posts by healed1337 →
This entry was posted in comic, comic review and tagged all-new marvel, all-new x-men, ancient egypt, apocalypse, apocalypse wars, baal, beast, comic review, comics, dennis hopeless, en sabah nur, evan, genesis, hank McCoy, kid apocalypse, mark bagley, marvel comics, nolan woodard, x-men. Bookmark the permalink.