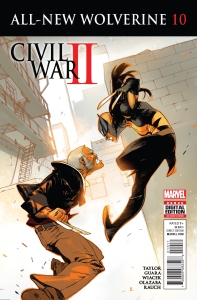 An X-23 series wouldn’t be complete without at least a little bit of involvement with her father figure, Logan. The original Wolverine had a couple flashback scenes earlier in the series, one showing the two of them working together against well-armed criminals, and the other showed that Logan wasn’t the father he should have been to Laura. In the last two issues though, Laura met Old Man Logan, an alternate reality counterpart to the original Wolverine, and one with an even worse past.

Written by Tom Taylor, All-New Wolverine 10 officially kicks off Laura’s tie-in to Marvel’s Civil War II with 10 extra pages. That extra space is spent wisely, delving into the relationships between Old Man Logan, Laura and Gabby, Laura’s relatively innocent young clone. As the last issue revealed, Old Man Logan raised Laura in his universe’s version of Laura’s apartment, which really helps Laura warm up to him when she previously rejected Old Man Logan as her father figure. Gabby is ever the adorable optimist, happily calling Logan her grandpa. When a couple average burglars climb through Laura’s open window, Gabby responds to them with laughter, which the other two can’t help but join in. It’s a great little moment that also leads into Jonathan the Wolverine’s time to shine, earning him a new nickname.

As fun as this issue can be, it’s also quite dramatic later on. There are hints that Gabby did something in Logan’s home universe, and there’s a heated debate between him and Laura that helps highlight their very different personalities, while also showing how much they care for each other. Her growing ability to convince hardened killers to show their merciful side is shown off once again. Also, Laura’s given a great speed feat when she slices a bullet in half after it’s fired at her head at point blank range. The comic ends with a dark teaser however, promising that this story arc is about to get much more intense, and whatever friendship Laura and Logan have, might be severed by the end of this tie-in. The writing is very good from start to finish, whether it’s funny, dramatic or tense.

Ig Guara’s art is good, although it took me a few pages to get used to. The opening pages are a bit of a montage, showing the secure building where Ulysses is being protected, complete with New York City in the background. The facial expression as the page slowly zooms in on Ulysse’s face clearly show how his vision is making him nervous, and Old Man Logan’s bloody claws shown in his eyes , is dramatically effective. It’s followed by a spread of Old Man Logan screaming, and Laura in the background in clear emotional distress that amplifies the scene’s impact, although All-New Wolverine’s face looks a bit odd. I’m willing to forgive that when it’s a vision, and body and face proportions are normal throughout the rest of the comic.

Most of this issue takes place in Laura’s apartment, which is well detailed from the start with wrinkles in bed sheets and the fire escape clearly seen through the window. Facial expressions consistently do a great job at conveying emotion, with Gabby’s friendly smile when speaking to Logan, the feral look in Jonathan’s eyes when he charges at the burglars, and of course the terrified look in the Burgler’s eyes when they realize who’s apartment they just broke into. The quick action scene flows well, and when Laura slices through one burglar’s gun, the internal mechanisms break free in great detail. The colouring by John Rauch is also good. The vision scene at the start is shaded in red to emphasize how intense it is, while the rest of the comic is bright, colourful and appealing.

In terms of writing, this is the best issue of All-New Wolverine so far, and that’s saying a lot. It strikes a near perfect balance of fun, drama and teasing the much darker story that is to come. Although I don’t like the art as much as either David Lopez or Marcio Takara, it’s still good art that certainly doesn’t hold this comic back. Unlike Civil War II which so far doesn’t feel like it’s worth the $5 price tag per issue, All-New Wolverine 10 is definitely worth the extra dollar for 10 extra pages of story. If you’re an X-23 fan, you should be picking up this series, and it’s at least worth a read if you like the original Wolverine or are willing to give a female Wolverine a chance. Even though this is the second issue that Old Man Logan has appeared in, this still functions as a good starting point.

My favourite comic of the week is between this and Darth Vader 23, and they’re both so good that I may need a few more readings of each to decide which I prefer.

I am a relatively new comic book fan writing this blog for other new comic book fans and/or people who are interested in comics but don't know where to start. I've always been interested in writing, to the point where I have a college Creative Writing Certificate and I'm currently a year 2 Journalism student. I also have another blog where I mostly make fun of bad movies - www.healed1337.blogspot.com As for how I got into comics, I've always had a passing interest in superheroes: most notably Batman, Spider-man and the X-Men. Until February of 2011 (I think,) my only experience with any of these franchises came from the movies and video games. Shortly after I bought Marvel Vs. Capcom 3 however, I decided to check out X-23, Wolverine's female clone. I ended up reading her Innocence Lost origin story and enjoyed it. From there, I started reading various X-Men comics and it quickly exploded into my newest hobby. My other interests/hobbies include video games, movies, music, playing sports, my dogs and weird news.
View all posts by healed1337 →
This entry was posted in comic, comic review and tagged all-new marvel, all-new wolverine, civil war II, comic review, comics, darth vader, gabby, ig gaura, john rauch, laura kinney, logan, marvel civil war, marvel comics, old man logan, star wars, tom taylor, ulysses, wolverine, x-23, x-men. Bookmark the permalink.