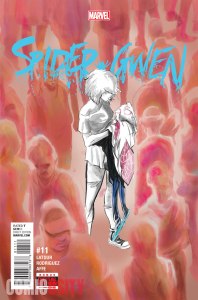 Here is this week’s second issue with Spider-Gwen in it. Since the events of Spider-Women, Gwen’s spider powers have been deactivated somehow. She has a device that can temporarily give her spider-powers again, but there are only a handful of doses left before she permanently becomes normal. That only makes Frank Castle’s quest to expose her as her universe’s Spider-Woman all the more threatening.

A lot of the sub-plots in this series are starting to come together. Frank Castle is getting more aggressive in his approach to arrest Gwen, even contacting Norman Osborn for help. The main focus is on Gwen and how she’s emotionally dealing with the loss of her powers. Although this has been going on for the last few issues, this one goes a bit deeper than the others. She considers her options, like fleeing to another Universe with her father, or trying to tell the cops what’s happening. The comic ends by teasing a fight that’s been a long time coming in this series. Jason Latour’s writing works fairly well here.

Robbi Rodriguez’s art is also good. The stylistic approach works better with the earlier issues in a sense, but here, the facial expressions do a great job at conveying emotion, whether it’s Gwen’s feeling of loss and confusion, Frank Castle’s determination or Reed Richards’s proud look when he fixes the wrist gadget that can temporarily restore Gwen’s powers. The background is often complete with little Easter Eggs, like a grocery store called “Bucky Barns”. Lauren Affe’s colouring is bright, well varied and appealing to the eye.

I considered dropping this series after the Spider-Women crossover for the sake of saving space, but it still remains a good enough comic to keep reading (that and I dropped Extraordinary X-Men, so that helps). The dramatic side of the writing works well, although if it keeps going on for too much longer it will start to feel old. The story feels like it’s growing more intense, and the series as a whole is starting to feel more focused. Although this isn’t the best starting point, if you’re interested in an alternate universe where Gwen Stacey got spider powers instead of Peter Parker, this is worth looking into.

I am a relatively new comic book fan writing this blog for other new comic book fans and/or people who are interested in comics but don't know where to start. I've always been interested in writing, to the point where I have a college Creative Writing Certificate and I'm currently a year 2 Journalism student. I also have another blog where I mostly make fun of bad movies - www.healed1337.blogspot.com As for how I got into comics, I've always had a passing interest in superheroes: most notably Batman, Spider-man and the X-Men. Until February of 2011 (I think,) my only experience with any of these franchises came from the movies and video games. Shortly after I bought Marvel Vs. Capcom 3 however, I decided to check out X-23, Wolverine's female clone. I ended up reading her Innocence Lost origin story and enjoyed it. From there, I started reading various X-Men comics and it quickly exploded into my newest hobby. My other interests/hobbies include video games, movies, music, playing sports, my dogs and weird news.
View all posts by healed1337 →
This entry was posted in comic, comic review and tagged comic review, comics, frank castle, gwen stacey, jason latour, lauren affe, marvel comics, norman osborn, reed richards, robbi rodriguez, spider-gwen, spider-woman, the punisher. Bookmark the permalink.