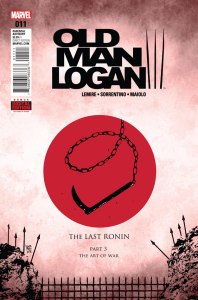 Wolverine and Japan go together like peanut butter and chocolate. So long as you’re a competent writer, it’s hard to screw it up. So far, writer Jeff Lemire’s been doing a great job with Old Man Logan’s solo series, so bringing him to Japan for “The Last Ronin” sounds brilliant.

This is a good comic. Not great, but good. In the previous two issues, a group of Ninjas called The Silent Order captured Old Man Logan (as well as Lady Deathstrike). The reasons why are explained in this comic, and it leads to some interesting mythology behind the Silent Order. Beyond that, this issue is mostly just a big fight scene. It’s a good fight scene, with some fun dialogue between Logan and Deathstrike when they’re forced to work together, but this isn’t nearly as dramatic as earlier story arcs in this series. It also means there isn’t as much to talk about as usual.

The art by Andrea Sorrentino is even better than his usual brilliant art. He perfectly captures both Logan and Deathstrike’s brutal fighting style. Normally it’s easy to talk about one or two standout panels with a great artist, but here, almost every page could be a standout page. There’s a great image of Logan and Deathstrike standing back to back, both looking angry while they’re surrounded by ninjas. There’s a montage of Logan fighting ninjas with spears, with a dragon separating the panels for a neat mythology effect. There’s the spread showing Logan’s past in red and white silhouettes, including a small cameo from X-23, Daken and Sabretooth, and another with the X-Men. The last spread might just be the best though, combining a fight scene from the Japan flashback with the current fight scene, with very different outcomes, while a fancy border shows flying geese, waves and flowers. Marcelo Maiolo’s colouring is also fantastic. There’s a tint to every panel that matches the mood, whether it’s the red panels when something brutal happens, the greener panels during a brief break in the fight or the pink look when someone reveals their powers at the very end of the comic.

Although the art is the best I’ve seen from Sorrentino, and that’s saying a lot, the action heavy issue without as much drama as usual still makes this a comic that’s good, but just short of being great. If you’ve been enjoying this series, by all means pick it up. If you’re interested in what’s probably the best Logan series in years, check this out. If you do, and you enjoy this, then keep in mind that the first two stories are even better.

I am a relatively new comic book fan writing this blog for other new comic book fans and/or people who are interested in comics but don't know where to start. I've always been interested in writing, to the point where I have a college Creative Writing Certificate and I'm currently a year 2 Journalism student. I also have another blog where I mostly make fun of bad movies - www.healed1337.blogspot.com As for how I got into comics, I've always had a passing interest in superheroes: most notably Batman, Spider-man and the X-Men. Until February of 2011 (I think,) my only experience with any of these franchises came from the movies and video games. Shortly after I bought Marvel Vs. Capcom 3 however, I decided to check out X-23, Wolverine's female clone. I ended up reading her Innocence Lost origin story and enjoyed it. From there, I started reading various X-Men comics and it quickly exploded into my newest hobby. My other interests/hobbies include video games, movies, music, playing sports, my dogs and weird news.
View all posts by healed1337 →
This entry was posted in comic, comic review and tagged all-new marvel, andrea sorrentino, comic review, comics, jeff lemire, lady deathstrike, marcelo maiolo, marvel comics, ninjas, old man logan, wolverine, x-men. Bookmark the permalink.