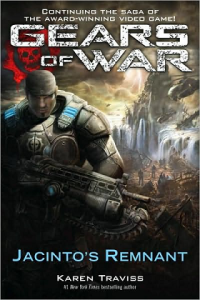 I originally intended to read through this book just before Gears of War 4 released on October 11. I even started reading it a few days before then. This week’s been so full of little things I needed to get done, like Thanksgiving (I’m Canadian), replacing my 10-year-old office chair (it finally crapped out), a couple other projects that came up short notice … you get the idea. So after having finally finished this book, let’s talk about it.

I’m going to write this review assuming that the reader has played the games, but hasn’t read the books. There will be game spoilers.

Jacinto’s Remnant, written by Karen Traviss, covers two different time periods just like the first book. There’s the main storyline taking place immediately after Gears of War 2 ends, focusing on everyone who survived the sinking of Jacinto and their efforts to find somewhere new to live. Although there are a few locust fights in this storyline, most of the focus is on how far humanity has fallen in the Gears of War universe. Even though they face extinction, they still kill each other, and the Gears aren’t completely innocent in this manner.

The flashback storyline focuses on the Hammer of Dawn strikes well before the first game, where three of the top Gears officials burn most of the planet, a subject that comes up a lot in Gears of War 3’s 4th act. Basically, Prescott, Hoffman and Adam Fenix scorch most of the planet, knowing that many humans won’t evacuate the danger zones, in hopes to take out a whole bunch of locusts and deny them assets at the same time.

The first book, Anvil Gate, was a bit too action heavy for its own good. It’s still worth a read, but there wasn’t enough downtime to focus on characters. Jacinto’s Remnant doesn’t have that problem at all. There’s still enough action to justify the Gears of War name, but there’s a lot of character focus. For example, Dom’s personal arc in the main storyline is trying to recover from his wife’s death, and it’s very well handled both from his perspective and the perspective of other characters observing him. Those who played Gears of War 3 know he never truly recovers, but he at least begins the process in this book.

That’s part of what connects these two time periods together thematically. Hoffman also goes through a horrific loss during the Hammer of Dawn strikes in a way that helps him understand what Dom’s going through. There isn’t as much page space dedicated to that part of the book, but there’s more than enough to highlight how brutal the aftermath is. It’s all summed up in a conversation between Hoffman and Dom near the end of the book, which is easily the best written moment in Jacinto’s Remnant. The book also wisely avoids Marcus Fenix’s perspective, allowing him to keep the appropriate level of mystery around his internal motivations.

As a whole, Jacinto’s Remnant is a great book. I wouldn’t recommend it to people who don’t enjoy the games – it’s written with the assumption that its readers have at least played Gears of War 2. It is however an easy recommendation to those who enjoy the games. They expand on what makes each character tick, explore a lot of background details that the games are vague on, and it actually increases the impact of certain moments in Gears of War 3. Even if you haven’t played the games for a while, you’ll still fully understand what’s going on.

Since I’ve also played through the new game, I might as well talk about my thoughts on Gears of War 4. Gameplay-wise, it makes further improvements on the Gears of War experience in terms of what you can do, most of the new weapons are fun and besides the overpowered shotgun, it still feels relatively balanced. The new enemies are fun to fight at first, but there isn’t that much variety with them compared to Gears of War 2 and 3, making the game feel a little repetitive after a while. The new supporting characters are great, and the returning cast is as enjoyable as always, especially Marcus Fenix. He shows up in Act 2 and remains for most of the rest of the game, and he’s just as awesomely grumpy and mysterious as always. JD Fenix is kind of boring so far though. There are some great emotional moments in the story and a couple huge twists in the second half, both of which are kind of awesome. As a whole, it’s not as good as Gears of War 2 or 3, but it’s a good start to what could be a great run for Coalition Studios.

As for multiplayer, well … I don’t have Xbox Live Gold right now so I can’t comment on that too much. Even though it has bots, it’s much harder to play multiplayer on your own – team death match forces you to have at least one other human player, something that neither Gears 2 nor 3 did, and you can’t choose how many bots you have if you turn them on. If there’s something else you’re supposed to do, I haven’t figured it out yet, but the apparent lack of options compared to previous entries is disappointing.

Overall, I’d say Gears of War 4 is good. Not quite great, but there is potential for future entries to the series to become great.

I am a relatively new comic book fan writing this blog for other new comic book fans and/or people who are interested in comics but don't know where to start. I've always been interested in writing, to the point where I have a college Creative Writing Certificate and I'm currently a year 2 Journalism student. I also have another blog where I mostly make fun of bad movies - www.healed1337.blogspot.com As for how I got into comics, I've always had a passing interest in superheroes: most notably Batman, Spider-man and the X-Men. Until February of 2011 (I think,) my only experience with any of these franchises came from the movies and video games. Shortly after I bought Marvel Vs. Capcom 3 however, I decided to check out X-23, Wolverine's female clone. I ended up reading her Innocence Lost origin story and enjoyed it. From there, I started reading various X-Men comics and it quickly exploded into my newest hobby. My other interests/hobbies include video games, movies, music, playing sports, my dogs and weird news.
View all posts by healed1337 →
This entry was posted in book review, novel review, novels, video games and tagged chairman prescott, coalition studios, colonol hoffman, dom santiago, gears of war, gears of war 2, gears of war 3, gears of war 4, gears of war: jacinto's remnant, hammer of dawn, jacinto, jacinto's remnant, jd fenix, karen traviss, locusts, marcus fenix, novel reading, novel review, novels, xbox, xbox one. Bookmark the permalink.