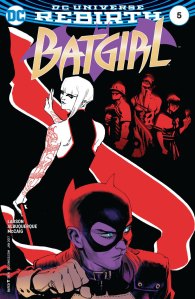 Leading up to this issue, Batgirls’ been investigating “The Teacher” while travelling around Asia. The Teacher is a Chinese criminal who’s stolen a drug formula that greatly enhances brain function, but at the potential cost of losing your hair and potentially other side effects. The teacher is using it to help people who have trouble passing entrance exams, turning her into a much more sympathetic villain than usual for superhero comics. This issue concludes Batgirl’s first DC Rebirth story arc.

At the end of the last issue, what remained of the Teacher’s formula smashed, and soaked into The Teacher’s skin, giving her an almost immediate edge in batgirl’s fight with her. The fight turns into a very interesting look into the downsides of Barbara’s photographic memory. She often remembers little details that she doesn’t need to, like the ingredients in a candy bar she ate when she was 10 (an example this comic uses). This slows down her quick thinking skills. The Teacher, who’s pumped up by the drug, is able to use that against her. Barbara is able to shut off her photographic memory after a hard hit to the head, but there are potential consequences that are yet to be explored. That one little aspect just made the future of this series much more exciting. This issue ends with a satisfying conclusion to the Teacher arc and a quick yet effective ending to the Kai/Barbara romance that didn’t last too long.

The art by Rafael Albuquerque is good.  It’s a simple look that makes great use of minimized environmental details to help tell the story, like highlighting the power cables the Teacher zip lines down, or the Teacher’s trail of hair on the floor. The fight scene flows well, making good use of realistic looking martial arts poses. Facial expressions do a great job at conveying subtle emotions, like Barbara’s nervous look when she realizes she’s at a disadvantage in the fight, her confused look when her memory turns off for a moment and how she barely remembers anything. The sad look in her eyes when Kai asks “Batgirl” to tell Barbara he’s sorry gives their failed romance a nice conclusion, showing that she feels sorry for Kai even though he involved himself in “The Teacher” plot, a major turnoff for Barbara. Dave Mccaig’s colouring is also good. It’s simple like the art style, but it’s colourful and appealing to the eye.

This is a good start to writer Hope Larson’s Batgirl’s DC Rebirth series. It started off kind of fun and improved with each issue, increasingly adding both drama and intelligent storytelling into the mix. This is a good sign for where the series could go from here. Batgirl fans should pick this up, and those interested in checking out a more light-hearted Batman franchise book should give this a chance.

I am a relatively new comic book fan writing this blog for other new comic book fans and/or people who are interested in comics but don't know where to start. I've always been interested in writing, to the point where I have a college Creative Writing Certificate and I'm currently a year 2 Journalism student. I also have another blog where I mostly make fun of bad movies - www.healed1337.blogspot.com As for how I got into comics, I've always had a passing interest in superheroes: most notably Batman, Spider-man and the X-Men. Until February of 2011 (I think,) my only experience with any of these franchises came from the movies and video games. Shortly after I bought Marvel Vs. Capcom 3 however, I decided to check out X-23, Wolverine's female clone. I ended up reading her Innocence Lost origin story and enjoyed it. From there, I started reading various X-Men comics and it quickly exploded into my newest hobby. My other interests/hobbies include video games, movies, music, playing sports, my dogs and weird news.
View all posts by healed1337 →
This entry was posted in comic, comic review and tagged barbara gordon, batgirl, batman, comic review, comics, dave mccaig, dc comics, dc rebirth, hope larson, rafael albuquerque. Bookmark the permalink.