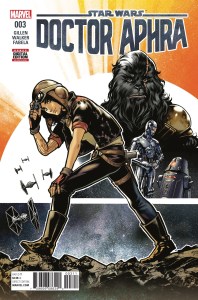 In the previous issue, Doctor Aphra debated with her estrange father for a while about what happened to the ancient sect with relations to the Jedi. They ended up heading to a moon housing one of their temples, which happened to be on Yavin 4. The old rebel base is being searched by the Empire at the time.

Doctor Aphra 3, written by Kieron Gillen, continues the adventures of Darth Vader’s former assistant (during Darth Vader’s solo series). She turned out to be a great character in her own right – kind of a cross between Han Solo and Indiana Jones, but with a real dark side to her. Her estranged father is hilariously out of touch with intergalactic events, obsessed with his search for answers. While they search the temple for clues, their dialogue is consistently amusing, and the mystery is intriguing. Meanwhile, Krrsantan, the mercenary wookie, goes Rambo on the empire in the forest. It all comes together for a thoroughly entertaining comic.

The art by Kev Walker is great. The background details perfectly capture Yavin 4’s forest environment, with rocks covered in cracks and moss, trees and bushes, and an opening panel that almost looks like a water painting of the misty forest, and a silhouette of the main temple. Facial expression perfectly capture emotions, whether it’s Aphra’s annoyance at her father, her father’s confusion when he learns that the Death Star was real, and the wookie’s aggressive looks when he’s plowing down Stormtroopers in a variety of ways. Antonio Fabela’s colouring compliments the art well with a colourful environment outside, an old brown temple on the inside, and good use of shadows and reflections.

This is a great comic. It feels like an Indiana Jones story in the Star Wars Universe, just starring a bunch of morally questionable characters instead of heroes. Doctor Aphra could be a hero if she wanted to, but she could also be just as villainous as Darth Vader himself too. That’s part of what makes her such a compelling character. If any of this sounds interesting to you, pick this series up.

I am a relatively new comic book fan writing this blog for other new comic book fans and/or people who are interested in comics but don't know where to start. I've always been interested in writing, to the point where I have a college Creative Writing Certificate and I'm currently a year 2 Journalism student. I also have another blog where I mostly make fun of bad movies - www.healed1337.blogspot.com As for how I got into comics, I've always had a passing interest in superheroes: most notably Batman, Spider-man and the X-Men. Until February of 2011 (I think,) my only experience with any of these franchises came from the movies and video games. Shortly after I bought Marvel Vs. Capcom 3 however, I decided to check out X-23, Wolverine's female clone. I ended up reading her Innocence Lost origin story and enjoyed it. From there, I started reading various X-Men comics and it quickly exploded into my newest hobby. My other interests/hobbies include video games, movies, music, playing sports, my dogs and weird news.
View all posts by healed1337 →
This entry was posted in comic, comic review and tagged antonio fabela, black krrsantan, comic review, comics, doctor aphra, dr. aphra, galactic empire, kev walker, kieron gillen, star wars, star wars comics, yavin 4. Bookmark the permalink.