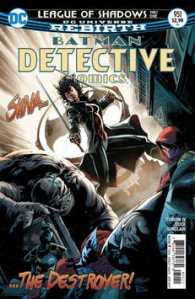 My only previous experience with the League of Shadows in the Batman franchise comes from Batman Begins. I’m not even sure if Ra’s Al Ghul is usually tied with the group in the comics or not. So when a series as good as Detective Comics brings the shadow organization in, I’m excited. A shadow organization that, at least in the movie, tends to bring entire cities to ruins from the shadows vs Batman’s team. That just sounds awesome. Let’s see if the first issue of this story arc lives up to its potential.

Detective Comics 951, written by James Tynion IV, kicks off with Lady Shiva executing a member of the Colony, the first group that Batman’s team fought against in this run. The Colony used very questionable methods in their efforts to defend Gotham City, but the events in this issue may have proven that Colonel Kane’s group might be onto something. After the dark opening, there’s a fun scene with some of the team members training in their special simulation room, along with an amusing conversation between Batman and Batwoman. Batwoman’s insistence that they should at least try to enjoy their work sometimes is endearing, highlighting another important difference between the two. Their mutual hope to help Cassandra Cain as a person is a nice dramatic touch, and it’s also nice to see Batman admit that he’d likely lose in an all-out fight with the former child assassin.

The lighthearted mood doesn’t last too long though. About half-way into the comic, the League of Shadows makes their first move, and it’s a very public one that still manages to keep them in the shadows. How? They convincingly frame others for their kills. At this point we don’t know what the League’s end goal is, but they’ve clearly planned everything well. The general mood is tense, and the question of whether Colonel Kane was right to use his extreme methods or not is a compelling one. I can’t say much more about the story without spoiling things but the ending more than lives up to expectations.

Christian Duce’s art is great. The opening pages carry a mysterious feel with a close-up of a badly injured man tied to a chair in a darkened warehouse, blood dripping on the floor. The streets of Gotham are very well detailed, with Batman standing on top of a Gargoyle in an environment that reminds me of Tim Burton’s first Batman movie. Batwoman’s grin when she’s throwing jokes at Batman over the radio is perfect. This good use of facial expression continues when the mood shifts to intense and dark, with Kate’s reflective look when her father tells her to be careful against the League of Shadows, and her father’s annoyed look when Batman clearly doubts what he seems to know about the enemy. Showing off Cassandra Cain’s moves in the training sequence is also fun to watch; it makes good use of motion blurs and use of her environment to her advantage. Alex Sinclair’s colouring is also great. The shadows in the opening scene add to the creepy atmosphere, and there’s great use of light shining through the window of the mayor’s otherwise darkened office. Apart from that, the comic is very colourful.

This is a fantastic start to the League of Shadows story arc. Although it’s a very dark comic, the mood is balanced with a couple light-hearted moments and some good jokes thrown around. There’s more than enough mystery that it’s not even worth guessing the League’s plans yet, but there are still enough answers that you know it’s something big. This is easily my favourite comic of the week. If you’re remotely interested in a Batman team book, you should be buying this series. You are welcome.

I am a relatively new comic book fan writing this blog for other new comic book fans and/or people who are interested in comics but don't know where to start. I've always been interested in writing, to the point where I have a college Creative Writing Certificate and I'm currently a year 2 Journalism student. I also have another blog where I mostly make fun of bad movies - www.healed1337.blogspot.com As for how I got into comics, I've always had a passing interest in superheroes: most notably Batman, Spider-man and the X-Men. Until February of 2011 (I think,) my only experience with any of these franchises came from the movies and video games. Shortly after I bought Marvel Vs. Capcom 3 however, I decided to check out X-23, Wolverine's female clone. I ended up reading her Innocence Lost origin story and enjoyed it. From there, I started reading various X-Men comics and it quickly exploded into my newest hobby. My other interests/hobbies include video games, movies, music, playing sports, my dogs and weird news.
View all posts by healed1337 →
This entry was posted in comic, comic review and tagged alex sinclair, batman, batwoman, bruce wayne, cassandra cain, christian duce, colonel kane, comic review, comics, dc comics, dc rebirth, detective comics, james tynion IV, kate kane, lady shiva, league of shadows, orphan, the colony. Bookmark the permalink.