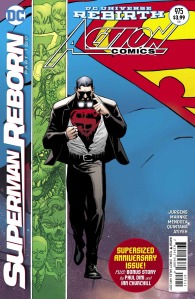 This is the second part of a 4-part crossover with Superman. In last week’s Superman 18, Jon Kent, along with Clark and Lois’s country home, disappeared in a strange blue flame. This clearly distraught the two of them. Their only clue was a short appearance by the mysterious Clark Kent that’s been hanging around Metropolis since DC Rebirth began.

Written by Dan Jurgens, Action Comics 975 continues the story with Superman flying Lois into the city, searching for his old apartment when he worked at the Daily Planet as Clark Kent. Right away, things are weird. The only food in the house is some kind of junk food or candy, and besides a TV, some books and some furniture, there doesn’t seem to be any personal belongings of any kind. When the mysterious Clark Kent does show up, things get really weird. I don’t feel like spoiling who this Clark Kent is, but he does reveal himself as a character I’ve never heard of before. It’s not as dramatically intense as Superman 18, but it’s a necessary one in that it explains the story, and it’s still fun.

The art by Doug Mahnke is great. The opening spread shows Superman flying through Metropolis with a look that’s half determined, half grim. Lois shows a lot more sadness, but there’s a touch of determination in her eyes as well. There’s a great variety of buildings in the background on the next page, with a mix of on and off lights in the windows, a sky that gets progressively darker as you go higher, and a motion blur behind Superman as he’s flying. The apartment is well detailed with a single newspaper on the living room table, all the junk food piled into the fridge and the nice touch of a transparent desk as Superman uses his X-ray vision on it. At the risk of a partial spoiler, the background gets really weird shortly after the mystery Clark Kent shows up. Wil Quintana’s colouring is also great.  There’s great use of lighting and shadows in Clark’s darkened apartment, the blue flame in the flashback glows like an actual fire, and there’s a lot of colour in both the candy in the fridge and the background when things get weird.

There’s also a backup story written by Paul Dini, drawn by Ian Churchill and coloured by Mike Atiyeh. I can’t say too much about it without spoiling who the mystery Clark Kent is, but it features him and Jon. Jon shows a good mix of compassion, fear and anger with his situation, and the villain’s motivations are very well explained. The art is a bit of a simpler look, but works very well for the story’s mood. This extra story makes the extra dollar price tag more than worth it. It also does a great job at introducing this character to someone who’s never even heard of him before, like me. It actually makes me curious about some of his classic stories.

Action Comics 975 is a great comic. Like I said, it’s not as dramatic as last week’s Superman 18, but there’s still a moment at the end that’s both tragic and kind of scary. In the meantime, the way the villain is revealed is fun, and the side story explains everything you need to know about him in an entertaining way. I decided early on that I’d only follow one of the main Superman books, but if this is anything to judge by, Action Comics could be pretty good too. If you enjoyed Superman 18 last week, you should pick this issue up.

Also, the next anniversary issue is Action Comics 1000. That’s exciting.

I am a relatively new comic book fan writing this blog for other new comic book fans and/or people who are interested in comics but don't know where to start. I've always been interested in writing, to the point where I have a college Creative Writing Certificate and I'm currently a year 2 Journalism student. I also have another blog where I mostly make fun of bad movies - www.healed1337.blogspot.com As for how I got into comics, I've always had a passing interest in superheroes: most notably Batman, Spider-man and the X-Men. Until February of 2011 (I think,) my only experience with any of these franchises came from the movies and video games. Shortly after I bought Marvel Vs. Capcom 3 however, I decided to check out X-23, Wolverine's female clone. I ended up reading her Innocence Lost origin story and enjoyed it. From there, I started reading various X-Men comics and it quickly exploded into my newest hobby. My other interests/hobbies include video games, movies, music, playing sports, my dogs and weird news.
View all posts by healed1337 →
This entry was posted in comic, comic review and tagged action comics, clark kent, comic review, comics, dan jurgens, dc comics, dc rebirth, doug mahnke, ian churchill, jon kent, lois lane, metropolis, michael atiyeh, paul dini, superman, wil quintana. Bookmark the permalink.