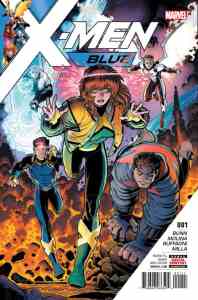 Since I only bought 4 comics this week, I’m skipping the first impressions post and going straight to comic reviews for each of them. And first up is X-Men Blue, the new series written by Cullen Bunn starring the teenaged original 5 X-Men.

The mood of this comic feels similar to Dennis Hopeless’s All-New X-Men run, in that it’s mostly light hearted and fun. That’s not to say it’s completely light hearted – this first issue does touch on anti-mutant prejudice a little bit, even if it’s in the background, and there are hints that the series might get dark from time to time. But as a whole, this feels like a return to the classic X-Men comics in a number of ways, while still keeping recent developments on the table to keep things fresh.

The majority of this issue takes place on a yacht, overtaken by Black Tom Cassidy and … I won’t spoil his ally. It’s a fun fight scene that shows the X-Men dealing with villains they’ve fought before, but when the villains were less experienced, and their motives different. That said, things like Young Beast’s recent magical studies and Angel’s cosmic power upgrade help even the odds. All this adds up to a fun action scene, very well-written dialogue and a quick yet effective closer that makes the direction for this series perfectly clear.

There’s also a back-up story that all but directly tells us which clawed mutant will be joining the team in the future. I won’t spoil it exactly, but the mood in this scene is a fair amount darker and even a bit creepy, contrasting the light-hearted main story quite well. There isn’t too much else to say about the back-up story since it doesn’t quite end – it’s more of a teaser for things to come than anything else.

Jorge Molina’s art is good. There’s a slight cartoon feel to the art, which matches the mood very well without going overboard. It’s also a clean, smooth appearance, but not without fine details every now and then. For example, there’s plenty of debris flying around during the fight, the dishes on the tables in the yacht’s dining hall add to the environmental detail, and all the weird tentacles and hands showing up when Beast taps into his magic give the moment the right touch of disturbing without affecting the overall mood. Facial expressions do a good job at conveying emotions, like Iceman looking somewhat sad when he complains that they can’t use pickles to teleport anymore, Jean’s optimistic smile when she’s encouraging her teammates, and Black Tom Cassidy’s look of pain after Beast kicks him straight in the face. The colouring by Matt Milla is great. The yacht fight is bright and colourful, even complete with a red mark on Black Tom’s face after he’s kicked. There’s also great use of reflection on Ice Man’s body, and glaring lights during the darker scenes toward the end of the comic. Matteo Buffagni handles the art in the back-up story, and it’s a simpler, more realistic look that works well for the scene.

I wouldn’t quite call this comic great, but it’s a good start to X-Men Blue. It quickly establishes the comic’s mood and by the end of the issue, there’s a clear direction. It’s fun, with the potential to get more dramatic, and the characterization for each of the original 5 feels right. If the teenaged original 5 X-Men interest you, or you’ve been enjoying the All-New X-Men comics so far, you’ll likely enjoy this one.

I am a relatively new comic book fan writing this blog for other new comic book fans and/or people who are interested in comics but don't know where to start. I've always been interested in writing, to the point where I have a college Creative Writing Certificate and I'm currently a year 2 Journalism student. I also have another blog where I mostly make fun of bad movies - www.healed1337.blogspot.com As for how I got into comics, I've always had a passing interest in superheroes: most notably Batman, Spider-man and the X-Men. Until February of 2011 (I think,) my only experience with any of these franchises came from the movies and video games. Shortly after I bought Marvel Vs. Capcom 3 however, I decided to check out X-23, Wolverine's female clone. I ended up reading her Innocence Lost origin story and enjoyed it. From there, I started reading various X-Men comics and it quickly exploded into my newest hobby. My other interests/hobbies include video games, movies, music, playing sports, my dogs and weird news.
View all posts by healed1337 →
This entry was posted in comic, comic review and tagged angel, beast, black tom cassidy, bobby drake, comic review, comics, cullen bunn, cyclops, hank McCoy, iceman, jean grey, Jorge Molina, marvel comics, marvel now, matt milla, original x-men, scott summers, warren worthington, x-men, x-men blue. Bookmark the permalink.