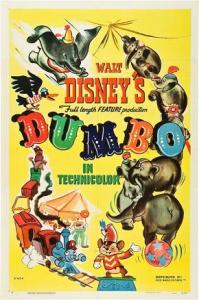 While they’ve since more than made their money back, neither Pinocchio nor Fantasia were financially successful when they first released in 1940. The biggest contributing factor was how World War 2 started the year before, completely cutting off the European market. The disappointing results put Disney in financial trouble, and as such, they needed a quick hit. They drastically lowered the budget for their fourth animated feature, Dumbo, in favour of a more simplistic style of animation. They ended up releasing it in 1941.

Unlike the previous two Disney movie, Dumbo was financially successful upon its initial release. In fact, it was Disney’s most successful film of the 1940’s, even though the Pearl Harbor attack happened just over a month after the movie’s release. Critics loved it. Like all of Disney’s earlier films, it also saw multiple re-releases. Dumbo also holds the unique distinction of being the first Disney movie ever released on home video. At 65 minutes long, it’s also one of Disney’s shortest animated features, no doubt a side effect from the smaller budget.

In case you’re not aware, Dumbo is the story of a baby elephant with enormous ears. Besides his mother who loves him and a mouse who befriends him (a satire on elephants being afraid of mice), he’s a social outcast. The other elephants tease him at first, and then refuse to acknowledge him as an elephant after he’s forced to become a circus clown. There isn’t all that much dialogue in this movie, using the visuals and the soundtrack to tell the story. And it’s the visuals that really make this movie work. 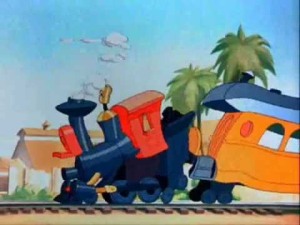 The imagery in this movie is very creative. Everything has character. The train’s locomotive struggles to climb up a steep hill (while the choo choo sounds utter the words “I think I can”), and once the trip ends, it slouches while steam sprays out of the engine block. The montage of the circus workers and the animals working together to put up the tents shows the various poles kind of bouncing along with the music. Hammers hitting the tent pegs acts as the song’s percussion. High altitude shots from the perspective of the stork delivering Dumbo shows the train driving along a mapified version of Florida. Every time an elephant walks on a board, they bend quite a bit.

Beyond the creative visuals, the story itself is deeply emotional. You feel for Dumbo’s mother when her baby’s delivery is delayed. When the circus attendees start making fun of Dumbo, her mother freaks out, and you can feel her anger. The deep emotional pain that both the mother and son feel when they’re separated right after carries through most of the movie, culminating in the emotional climax where Dumbo walks up to his mother’s prison of sorts, and they can only touch trunks through the cage window. 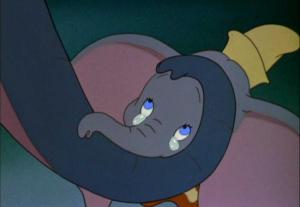 It’s not all sad emotions though. The movie is emotionally balanced through not only the creative visuals, but some great humour and some fun songs. They aren’t as fun as I Got No Strings from Pinocchio or as glorious as some of Disney’s newer songs, but they fit perfectly with the movie’s mood. The scene where Dumbo acts like a circus clown is a touch sad, but the visuals are a lot of fun. That is if you’re not scared of clowns, because then the scene would be downright terrifying. 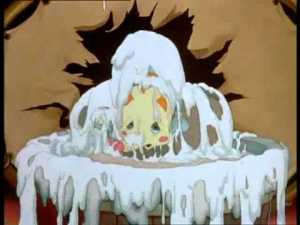 But there are three scenes in particular I want to go into detail with. The first is the pink elephant scene. In a movie that’s already stuffed full with creative visuals, the Pink Elephant scene is in a league of its own. It comes after Dumbo and his mouse friend drink from a barrel of water, after the circus clowns accidentally dropped a bottle of booze inside. The fact that they’re hallucinating from being drunk doesn’t make much sense, but the name “pink elephant” does refer to a popular saying that drunk people see pink elephants from back in the day. Of course in a world where locomotives have personalities and if you go high up enough, land looks like maps, it’s far too late to try to make sense of things. But there’s no possible way I could do this scene justice by talking about it, so here’s the full scene on video.

Epilepsy warning – this scene gets completely out of control right at the end and there is a bit of flashing.

The second scene I wish to discuss immediately follows the pink elephants scene. It’s the scene where Dumbo learns that his giant ears allow him to fly, after of course he wakes up in a tree. There are a group of crows singing “When I see an Elephant Fly”. Some people accuse this song of being a bit racist, seeing how it sounds like a black choir singing it. Well, that’s because it actually is an all-black choir singing it. Specifically the Hall Johnson Choir, who were very popular at the time. It portrays the crows as intelligent, sympathetic to Dumbo (when most other characters treat him poorly) and free to go wherever they please. If anything, it was very progressive for its time and it’s still fairly respectful today. That’s all I have to say on the matter. 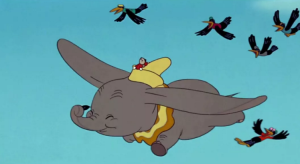 The third scene is the very end of the movie, where Dumbo shows the world where he can fly. It’s a glorious moment where he scares all the human clowns, sprays the elephants who once made fun of him with peanut shells and completely wows the circus audience. The movie comes full circle here, with Dumbo not only gaining the respect of everyone around him, but it convinces the circus to release his mother and even give the two of them a private car at the end of the train. The movie doesn’t spell it out, but it’s a nice lesson where freaks of nature can be brilliant in their own way.

There’s a reason Dumbo is often considered one of Disney’s best movies. It’s a simple story that’s told in an emotional way, balanced out with fun visuals and an equally fun soundtrack. It can be dramatically rough at times. I could see people who get very upset at mistreatment of animals hating parts of this movie, but at the same time, the movie never portrays animal abuse as a good thing. It explores how it can negatively affect animals. That’s not to say the movie is perfect by any means. The songs in the first half of the movie, while fun, all kind of sound the same and aren’t all that memorable. With all that said, of the three Disney movies with a story since I started these posts, it’s the one I enjoyed re-watching the most.

The next Disney animated movie on my list is Bambi, a movie I haven’t seen since I was a little kid. I’m not sure whether I’m looking forward to this or not. After that, there are five features in a row that are a collection of shorts, because World War 2 interrupted the filming schedule and most of the creative team was fighting overseas. I’m planning on summing all of them up in one blog post, so I might not watch all of them.

I am a relatively new comic book fan writing this blog for other new comic book fans and/or people who are interested in comics but don't know where to start. I've always been interested in writing, to the point where I have a college Creative Writing Certificate and I'm currently a year 2 Journalism student. I also have another blog where I mostly make fun of bad movies - www.healed1337.blogspot.com As for how I got into comics, I've always had a passing interest in superheroes: most notably Batman, Spider-man and the X-Men. Until February of 2011 (I think,) my only experience with any of these franchises came from the movies and video games. Shortly after I bought Marvel Vs. Capcom 3 however, I decided to check out X-23, Wolverine's female clone. I ended up reading her Innocence Lost origin story and enjoyed it. From there, I started reading various X-Men comics and it quickly exploded into my newest hobby. My other interests/hobbies include video games, movies, music, playing sports, my dogs and weird news.
View all posts by healed1337 →
This entry was posted in movies and tagged animal cruelty, animated, animated movies, animation, circus, clowns, disney, disney studios, dumbo, hall johnson choir, movies, pink elephants, walt disney, world war 2. Bookmark the permalink.