After the success of Dumbo, Disney had enough money to increase the budget and the work behind their next animated feature, 1942’s Bambi. Of course like the previous three animated features, the European market was completely cut off because of the war, and now that the United States were involved, it negatively affected the market at home too. It didn’t help that, unlike the very positive reception with the first four Disney movies, Bambi received mixed reviews. I found one particularly nasty review from the New Republic archives reposted online for your enjoyment.

Personally, I remember enjoying Bambi as a little kid, but it was probably the first Disney movie I stopped watching. When my parents started selling our VHS tapes in garage sales, I felt sad over losing some of them. Bambi wasn’t one of them. Still, I’m glad that I finally got around to re-watching Bambi.

Even though I found Snow White and the Seven Dwarfs boring when I re-watched it last week, I still managed to sit through it no problem. That’s not the case with Bambi. I actually fell asleep during the first act and needed to continue it later that day, where I paused it several times to get a snack so I wouldn’t get too bored. Yeah, I didn’t really like this one very much.

That’s not to say that Bambi doesn’t have merits. Like Snow White and Pinocchio, it made huge advancements in animation. They studied how a lot of different animals move and how they express themselves, making for some very realistic animal animations throughout the movie. They painted on glass for the backgrounds, and moved them at different speeds to simulate 3d backgrounds. There’s plenty more they did to innovate animation, and there are several great documentaries you can watch on the subject.

The story is told mostly through the animation, which is good since outside of Fantasia, Bambi features the least amount of dialogue out of all the Disney Animated Features in history. The soundtrack is very atmospheric as well, and it’s the one thing that helped keep me awake during the first act when I tried to watch it a second time. Another thing I didn’t enjoy about the movie is said dialogue. Bambi is clearly aimed toward younger children, with a lot of the earlier dialogue coming from other young animals that are trying to teach Bambi how to walk and talk. The first half of this movie is really just a giant ball of cute. I can only take so much cute.

The second half of the movie is kind of notorious for its death scene. Even if you know it’s coming, the death of Bambi’s mother by the hands of hunters is rough. It’s made worse by the fact that it cuts straight to a happy song where birds are chirping, leaving no room for emotional recovery in case it bothers a kid. There’s a reason why, years later, there are still jokes about kids crying for days on end because Bambi’s mother died (even if they can’t mention Bambi by name due to copyright issues). It never really broke me up as a kid and it certainly didn’t traumatize me, but I still felt sad. It’s true that a hard hitting scene like this may be important for a child’s development, but it will be too intense for some little kids. Considering the dialogue in the first half in the movie seems to be geared towards little kids, it makes me wonder who this movie was made for.

There are a couple action scenes in the third act that help speed up the movie. The first is a fight between a young adult Bambi and another adult deer, who’s trying to take Faline (a female deer he met as a kid) away. The fight scene is very well animated, and there are a couple brilliant shots that only show the fight through their shadows. Unfortunately, the implication is that it’s an attempted rape. Kids won’t understand that aspect, but it might disturb some adults. The other action scene is the climax, where a bunch of hunters storm the forest. Bambi fights some dogs to save Faline, survives getting shot and then escapes a huge forest fire along with his father.

Speaking of Bambi’s father, the relationship between them is interesting. For most of Bambi’s younger days, he’s actually afraid of his father. Considering his father is known to be the oldest deer in the forest who looks like a muscular beast and acts kind of cold at times, you can understand why. Yet after Bambi’s mother dies, he starts following his father around more closely. By the end of the movie, he’s become a leader the same way his father has. He’s no longer afraid, and they grow close as a result. Because of the very little dialogue between them, this is mostly told through the animation, and the animation does a good job at showing Bambi’s fear toward him as a kid, and his ease as he grows older. 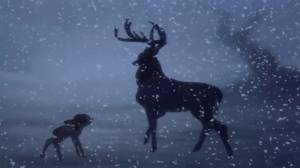 This movie definitely has its good points. The animation is great. When the action scenes start, they’re intense. As emotionally rough as the death of Bambi’s mother is, there’s no denying that it’s effective. The soundtrack helps emphasize the general atmosphere in the forest and it always matches the movie’s intended tone. But with all that said, there’s a drastic tonal shift between the first half of the movie and the second half. You’re really just watching a bunch of animals be cute for one half, mate in the second half, and then there are a couple fight scenes. As a whole, I didn’t like it and I’m not entirely sure who to recommend it to. 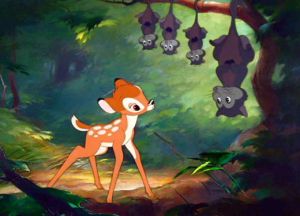 Also come to think of it, Bambi’s story progression is kind of similar to The Lion King. In both of them, the young animal is born at the start, there’s a little bit of cute stuff in the first half, one of their parents dies, and they eventually grow into a leader themselves. The difference is that The Lion King has a much deeper story, deeper characters and is more exciting in general. Bambi may be a historically important film, but I’d recommend The Lion King over it any day.

It is noteworthy how each of the first 5 Disney Studios animated features innovated animation in some way. Snow White and the Seven Dwarfs revolutionized how people were animated, Pinocchio made vast improvements on the technical side, like rain drops, water splashing and lighting techniques. Fantasia showed that animation can be a genuine art form. Dumbo showed how creative and emotional animation can be. And like I said earlier, Bambi improved on animal animation the same way that Snow White improved on human animation, and it also revolutionized 3d backgrounds. It’ll be a long time before we talk about another Disney movie that revolutionized animation in any way.

Next up is 5 movies in a row that were produced entirely during World War 2, and they’re all short film collections and musical compilations with animation. Instead of watching them all at once, I’ve decided that I’ll watch two of them and sum them up as a whole. I’ll spread the rest of them throughout the next 10 or so Disney Animated features after that, briefly summing up my thoughts in a paragraph or two. I’ve already watched Saludos Amigos, and I’ll watch Melody Time before I write the next post. Those are the first and last of these such features.

I am a relatively new comic book fan writing this blog for other new comic book fans and/or people who are interested in comics but don't know where to start. I've always been interested in writing, to the point where I have a college Creative Writing Certificate and I'm currently a year 2 Journalism student. I also have another blog where I mostly make fun of bad movies - www.healed1337.blogspot.com As for how I got into comics, I've always had a passing interest in superheroes: most notably Batman, Spider-man and the X-Men. Until February of 2011 (I think,) my only experience with any of these franchises came from the movies and video games. Shortly after I bought Marvel Vs. Capcom 3 however, I decided to check out X-23, Wolverine's female clone. I ended up reading her Innocence Lost origin story and enjoyed it. From there, I started reading various X-Men comics and it quickly exploded into my newest hobby. My other interests/hobbies include video games, movies, music, playing sports, my dogs and weird news.
View all posts by healed1337 →
This entry was posted in movies and tagged animated, animated movies, animation, bambi, disney, disney studios, dumbo, faline, fantasia, movies, pinocchio, snow white, snow white and the seven dwarfs, walt disney. Bookmark the permalink.