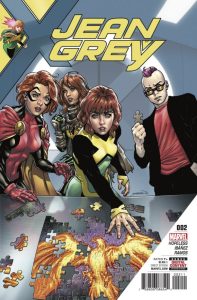 Since I only picked up four comics this week, I’ll just write a full review for each of them and skip the first impressions post. Now it’s time for Jean Grey 2.

In the previous issue, Jean Grey fought the Wrecking Crew and almost beat them single-handily. Having telepathy and telekinesis really works well against a bunch of very strong but dumb opponents. However, a vision of the phoenix force coming for her distracted Jean enough that the crew escaped. This comic picks up shortly after that one left off, with Jean seeking help from pretty much everyone else who’s hosted the Phoenix Force.

Written by Dennis Hopeless, Jean Grey 2 mostly focuses on the Phoenix Force, while also giving us a one-off fight scene. It brings in Rachel Summers, Quentin Quire, Colossus and Magik, and of course, Hope Summers. It’s nice to see Hope Summers again after a long absence, and to tease the whole Jean Grey comparison when the two finally meet up. Hope ended up in kind of a crazy situation involving an army of Reavers, and when everyone else shows up, it provides an intense but fun action scene to keep this issue moving.

The Phoenix portion of this comic mostly takes place in Jean’s head, where each of the others communicate with her mind in turn. They each provide a touch of their own experience with the Phoenix, Rachel’s being the only one that seems to be entirely positive. Although it doesn’t provide too many answers, it delves into Jean’s fear of the Phoenix force and it shows that everyone else present fully understands her fear. My feelings are still a bit mixed that the first story arc of Jean Grey’s solo series is focusing on the Phoenix Force, but so far it’s being handled well.

The art by Victor Ibanez is great. The opening page in Adult Beast’s lab is full of detail, especially Beast’s hologram of the galaxy. Jean’s frustrated expression when the X-Men and the Avengers don’t seem to believe her nails it. The Cerebro montage where Jean tracks down former hosts gives us a nice mix of what each character is up to, like Colossus buying art supplies, Magik fighting monsters and Quentin Quire relaxing on his Krakoa island. The action flows well with a great variety of cyborg looks with the Reavers. It’s also neat that while Jean and Hope do look similar, their noses and eyebrows are shaped differently, and Hope’s hardened facial expressions emphasize how hardcore she is compared to Jean’s softer personality. Jay David Ramos and Chris Sotomayor both handle colouring, and they do a great job. Beast’s mostly gray lab is balanced out with a colourful hologram full of planets and stars, and the variety of characters showing up to offer their advice. This kind of contrasting balance continues throughout the issue.

Jean Grey 2 is a fun issue that doesn’t necessarily do much to continue the main Phoenix story, but it does intensify the dramatic side while also explaining Jean’s goals. She’s trying to get as much help as she can in preparing for the Phoenix Force in case it arrives. The series is doing a good job at balancing her abilities with her limitations, while also exploring her fears. Hopeless’s Jean Grey series is definitely worth a look for fans of the character.

I am a relatively new comic book fan writing this blog for other new comic book fans and/or people who are interested in comics but don't know where to start. I've always been interested in writing, to the point where I have a college Creative Writing Certificate and I'm currently a year 2 Journalism student. I also have another blog where I mostly make fun of bad movies - www.healed1337.blogspot.com As for how I got into comics, I've always had a passing interest in superheroes: most notably Batman, Spider-man and the X-Men. Until February of 2011 (I think,) my only experience with any of these franchises came from the movies and video games. Shortly after I bought Marvel Vs. Capcom 3 however, I decided to check out X-23, Wolverine's female clone. I ended up reading her Innocence Lost origin story and enjoyed it. From there, I started reading various X-Men comics and it quickly exploded into my newest hobby. My other interests/hobbies include video games, movies, music, playing sports, my dogs and weird news.
View all posts by healed1337 →
This entry was posted in comic, comic review and tagged chris sotomayor, colossus, comic review, comics, dennis hopeless, hope summers, illyana rasputin, jay david ramos, jean grey, magik, marvel comics, marvel now, phoenix force, pitor rasputin, rachel summers, reavers, victor ibanez, x-men. Bookmark the permalink.