Disney Animated Movies 11 – The Adventures of Ichabod and Mr. Toad

As the last Walt Disney movie to release in the 1940’s, this feature is also the last of the packaged films that started in 1943, the rest of which I talked about in the previous post. However unlike those packages, this is two short films put together with only a short introduction between them. This is entirely animated, with no live action footage of any kind. With the right creative team, either of these short films could have been expanded into a full feature, not that they’re too short for their own good. In fact of all the packaged films this is widely regarded as the best, and for good reason.

Although the production for Walt Disney’s 11th animated feature began after World War 2 ended, they started planning their adaptation of The Wind and the Willows not long after Snow White and the Seven Dwarfs became a massive success. The Wind and the Willows would eventually end up being adapted into Mr. Toad’s half of this feature. The other half is an adaptation of The Legend of Sleepy Hollow, which you would think is a bit too creepy for a children’s film. What’s also odd is that even though Ichabod is mentioned first in the feature’s title, his story comes second. I guess the title sounded better that way, even if Sleepy Hollow is the better conclusion? I don’t know, it’s weird but it’s not worth worrying about. 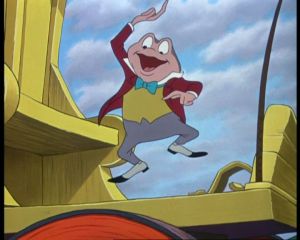 Mr. Toad’s story is about a toad who is the heir of a large sum of money, but spends most of his days obsessing over the newest traveling fads. It’s to the point where he’s risking blowing the value of his family estate and his good name along with it. He ends up offering to trade his estate for an automobile, but that automobile happens to be stolen. The rest of the short is about Mr. Toad trying to clear his name and recover his estate. It’s a fun adventure, but also one that shows the risks of blowing your money on unnecessary things. This is, in my opinion, the better of the two shorts.

The Legend of Sleepy Hollow starts fairly light hearted, and follows Ichabod Crane as he moves to a new town to be the new schoolmaster. He’s a bit odd with effeminate mannerisms, but he quickly wins over the town’s ladies, especially Katrina van Tassle. This is much to the display of Brom Bones, the village tough guy. This short is interesting because, as an adult, it’s hard to figure out who to vote for. On the one hand, Brom bullies Ichabod at first and he gets a bit vengeful when Ichabod starts winning over the girl of his dreams. On the other hand, Ichabod is devious in his own way and ends up humiliating Brom in several ways. It makes for a compelling watch when both characters have good and bad points, and are just fighting over the affection of the richest girl in town.

The ending with the headless horseman is more intense than I expected and I found it hard to look away. It’s probably too scary for younger kids and those who are easily frightened, but for those who can handle it, the headless horseman is awesome. Another thing I enjoyed about this short is that it’s entirely narrated by Bing Crosby, who also voices all the characters. The animation also helps tell the story in complex ways. Some of the slapstick humour is also funny, which isn’t always the case with classic Disney movies.

This double feature is actually really good. It feels like with the right creative team, either of these could have been expanded into a full feature on their own, but it’s perfectly fine the way it is. In fact, these two shorts have been released on their own in multiple formats in their original form, and on TV with light cuts to fit into a half-hour special. The Adventures of Ichabod and Mr. Toad won a now extinct Golden Globe category for Best Cinematography – Color, against a live action film. In 2014 it released on Blu-ray along with Fun and Fancy Free, which really is the best possible movie you could combine it with since they’re both packages with two short films. Overall, I would recommend that you check out The Adventures of Ichabod and Mr. Toad.

Next up is Cinderella. I find it amusing that Disney’s Animation Studios is known for its Disney Princess movies, yet it took them twelve movies to release two of them. Of course, Sleeping Beauty isn’t too far behind Cinderella, so by that point they figured out what sells. For the most part, the 50’s and early 60’s were great years for Walt Disney, so I’m looking forward to this next batch of movies.

I am a relatively new comic book fan writing this blog for other new comic book fans and/or people who are interested in comics but don't know where to start. I've always been interested in writing, to the point where I have a college Creative Writing Certificate and I'm currently a year 2 Journalism student. I also have another blog where I mostly make fun of bad movies - www.healed1337.blogspot.com As for how I got into comics, I've always had a passing interest in superheroes: most notably Batman, Spider-man and the X-Men. Until February of 2011 (I think,) my only experience with any of these franchises came from the movies and video games. Shortly after I bought Marvel Vs. Capcom 3 however, I decided to check out X-23, Wolverine's female clone. I ended up reading her Innocence Lost origin story and enjoyed it. From there, I started reading various X-Men comics and it quickly exploded into my newest hobby. My other interests/hobbies include video games, movies, music, playing sports, my dogs and weird news.
View all posts by healed1337 →
This entry was posted in movies and tagged animated movies, animation, brom bones, disney, disney studios, ichabod crane, katrina van tassle, movies, mr. toad, the adventures of ichabod and mr. toad, the headless horseman, the legend of sleepy hollow, The Wind and the Willows, walt disney, world war 2, ww2. Bookmark the permalink.

4 Responses to Disney Animated Movies 11 – The Adventures of Ichabod and Mr. Toad