After Cinderella’s massive success, Walt Disney started his own production company, funded several upcoming projects and got his animation studio out of debt (although he still distributed his movies through RKO Radio Pictures for a time). The next movie released was 1951’s Alice In Wonderland. Kathryn Beaumont, who voiced Alice, actually reprised the role as recently as 2002’s Kingdom Hearts video game, before retiring from voice acting in 2005. She’s still alive as of this writing.

Walt Disney originally planned to release the movie in the 1930’s as a hybrid animated/live action movie, but needed to delay it for multiple reasons. He renewed the project in the late 40’s, when they decided in 1946 to make it fully animated. I guess they made up for it with their live action remake in 2010. And before you ask, I’ve seen enough of the live action remake to know that I don’t want to watch the whole thing.

Believe it or not, Alice in Wonderland was critically panned by literary critics when it first released. The overall reception was mixed and it failed to make a profit. Critics accused Disney of dumbing down and Americanizing a literary classic. That wasn’t Disney’s intention – he made a family film while respecting the source material, and the main character still feels very British. The movie found itself a revival after Walt Disney’s death, during the rise of drug culture in the early 70’s. Disney Studios resisted at first, but they eventually embraced its newfound fame. The movie made massive profits during its first re-release, and it’s now considered a movie ahead of its time and one of the best adaptations of Alice’s adventures. You could call it a cult favourite.

Alice In Wonderland, based on Lewis Carroll’s work, stars a young British girl who finds herself in Wonderland. It’s a world that doesn’t have any rules of logic or even physics. It’s a world that seems to morph as you progress through it. It’s a world where flowers sing, eating mushrooms makes you grow or shrink to a ridiculous degree (depending on which side you eat) and a popular method of drying yourself off is marching around in circles as the waves come in every few seconds, completely submerging you for a moment. It’s fast paced, but not so much that it feels rushed in any way. You could almost say it’s not really a movie, but it’s an experience in the nicest possible way. If I say too much more about what happens, I’ll spoil the fun for anyone who hasn’t watched this yet. 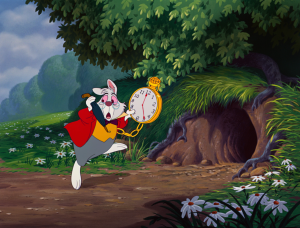 The art style is brilliant. Alice is drawn realistically, with facial expressions that perfectly convey her curiosity and emotions and movements that look real. She looks like she’s around 8 years old. The environment varies from the realistic looking forest in the real world, to rooms that are ridiculously proportioned, all the way to strange tunnels made purely of smoke and coloured spirals. Characters in the movie range from talking animals that move like humans to walking cards that flip, flop and bend. This movie will make you feel like you’re on drugs almost as much as the 1970’s Doctor Strange TV movie (and the TV movie is far trippier than last year’s movie). Whatever the case, everything is well detailed for a hand drawn movie from the 50’s, and it still looks decent today. 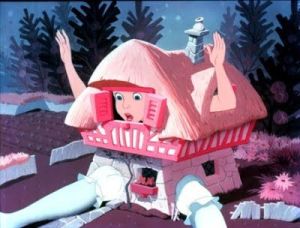 The soundtrack and songs are just as delightfully weird and varied as the visuals. You’ve got the Unbirthday song, the previously mentioned singing flowers, the kind of epic soundtrack when the army of cards shows up, and the epic climax where everything that makes this movie weird comes together at once. That said, there is room for a couple emotional moments, like when Alice is fed up with the world and can’t find her way home. Her song starts off smooth enough, but she starts losing it and cries through the words while the lyrics talk of not taking her own advice. It’s a fantastic moment that adds emotional depth to an otherwise fun movie.

In case you didn’t realize it by now, I highly recommend this one. Of all the straight to video animated sequels Disney’s released over the years, this is the movie that deserves it the most, yet it never got one. It’s based on Lewis Carroll’s book series that has plenty of sequels, so there’s no shortage of material. Then again, the live action Through the Looking Glass didn’t do so well (the theatrical run actually lost Disney $65 million), and for good reason. If you’re interested in more, Alice: Madness Returns for the Xbox 360, PS3 and PC is a dark adaptation of the material and it’s fascinating in its own right.

Next up is Peter Pan, one of my childhood favourites. After that, it’s Lady and the Tramp (the only Disney movie between the 50’s and 70’s I haven’t seen), and then Sleeping Beauty. Since Disney Princess movies are incredibly popular and they seem to keep saving the company, I’m also considering this thing where any time there are two Disney Princess movies released in the same decade, I’ll compare the two of them and try to decide which is better. If I do that, then I’ll be comparing Cinderella against Sleeping Beauty. I’d also compare The Little Mermaid to Beauty and the Beast (1989 is close enough to the 90’s), and Tangled to Frozen. Those last two movies actually have a bit of a weird rivalry, and I look forward to sharing my take on the debate when I get to them. There’s also a chance I’d compare Tangled to Princess and the Frog considering they were released one year apart, but I’ll decide that when I get there.

I am a relatively new comic book fan writing this blog for other new comic book fans and/or people who are interested in comics but don't know where to start. I've always been interested in writing, to the point where I have a college Creative Writing Certificate and I'm currently a year 2 Journalism student. I also have another blog where I mostly make fun of bad movies - www.healed1337.blogspot.com As for how I got into comics, I've always had a passing interest in superheroes: most notably Batman, Spider-man and the X-Men. Until February of 2011 (I think,) my only experience with any of these franchises came from the movies and video games. Shortly after I bought Marvel Vs. Capcom 3 however, I decided to check out X-23, Wolverine's female clone. I ended up reading her Innocence Lost origin story and enjoyed it. From there, I started reading various X-Men comics and it quickly exploded into my newest hobby. My other interests/hobbies include video games, movies, music, playing sports, my dogs and weird news.
View all posts by healed1337 →
This entry was posted in movies and tagged alice, alice in wonderland, animated movies, animation, disney, disney studios, fantasy, lewis carroll, mad hatter, movies, musical, RKO Radio Pictures, the unbirthday song, walt disney, wonderland. Bookmark the permalink.