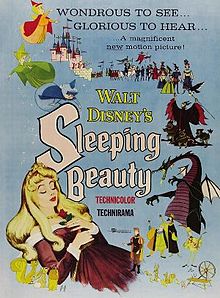 Before I get into Sleeping Beauty, there’s actually one thing I missed when talking about Lady and the Tramp. It was actually the first animated movie in history to be made in wide-screen. For a while between Land and the Tramp and the Black Cauldron, Disney’s animated movies went back and forth between full-screen and wide-screen. Sleeping Beauty, released 4 years later, is the second wide-screen release. However, it’s worth mentioning that here since Sleeping Beauty is the first movie of any kind that used the Super Technirama 70 method of widescreen, which ended up being fairly common in the 60’s and was most recently used with Disney’s 53rd animated feature, Frozen. So that’s significant.

I saw Sleeping Beauty once as a kid, and then I saw it a second time a couple of days ago. I remember enjoying it, but I only remembered the dragon fight at the very end. I’ve been both curious and nervous about watching the movie again ever since. On the one hand, Sleeping Beauty is famous for its main villain Maleficent, the previously mentioned dragon fight, and being the last Disney Princess movie that Walt Disney ever worked on. After this, they wouldn’t release another Disney Princess movie until 1989’s The Little Mermaid, 30 years later. On the other hand, it’s the second Disney Princess movie where the title character spends a significant portion of the movie under a sleeping spell. I didn’t like Snow White and the Seven Dwarfs when I re-watched it a few weeks ago. Going into this, I wasn’t sure what to think.

Sleeping Beauty began its story development shortly after Cinderella’s massive success. Its budget of $6 million made it the most expensive Disney film ever as of its 1959 release. Having earned the studio just over $5 million, it was enough of a financial loss for the animation department to layoff a bunch of people. However, it’s been re-released several times and has become hugely successful on home video, which now makes it the second most profitable movie released in 1959 (Ben-Hur is number 1). The reception was also a bit mixed, but it’s now regarded as one of the best animated films of all time and a quintessential adaptation of the original story.

Although I have a couple minor complaints, I can see why Sleeping Beauty is so well regarded now. More so than any other Disney Princess movie, classic or modern, everything about this movie encompasses a classic fairytale feel.

First off, the art style. Pretty much all the backgrounds in Sleeping Beauty are 2-dimmensional creations, and they all feel like they’re painted. There’s a lot of detail in everything, whether it’s the forest cottage Aurora grows up in, the trees, the castle dungeons or the forbidden mountain. The colour combinations make for an overall beautiful appearance that never lets up. Although the animation is based on live action footage, it’s drawn in such a way to match the 2-dimmensional feel of the backgrounds. It makes for a movie that looks and feels like a storybook, and it’s brilliant. Some of the dancing animation would later be reused in Beauty and the Beast because of how good it is.

My main complaint with Snow White is that it basically doesn’t have characters. It has a bunch of archetypes, none of which learn or change much throughout the movie. Sleeping Beauty doesn’t have that problem. Although it’s true that Princess Aurora (Sleeping Beauty) doesn’t get much screen time, we at least learn through that screen time that she loves the outdoors, likes to sing, can be a bit shy and is very kind. Unlike Snow White (who ran away from the unnamed prince), she at least interacts with Prince Phillip. What helps sell this one to me a bit more is that they both seem to recognize each other from their dreams.

Unlike the total non-character princes from the first two Disney Princess movies, Phillip is an actual character. His relationship with his horse is often amusing, but despite their occasional disagreements, they’re clearly loyal to each other. He seems to also enjoy the outdoors, and he’s fascinated by Aurora’s beautiful singing voice. Toward the end of the movie, Phillip risks his life to save Aurora from Maleficent in a glorious sequence of heroism. He’s not a deep character and he doesn’t really change or learn much, but there’s enough to call him a character. My only real complaint about Phillip (and the same goes for Aurora to a lesser extent), is that neither of them speak a single word in the third act. I would have very much liked to hear them at least speak a few lines after Phillip awoke Aurora from her curse, and she realized that the man she fell in love with in the forest happened to be the prince she was arranged to marry in the first place.

The real main characters in this movie are the three fairies that raise Aurora in the forest after Maleficent curses her at birth. They’re a lot of fun, and they make for great leads. I’m not going to try to break down their names, but they each have their own quirks, likes and dislikes. Two of them keep arguing over whether Aurora’s dress should be pink or blue. One of them is very insistent that they don’t ever use magic while they’re raising Aurora in the forest, while another keeps asking to use it, increasingly frustrated with the challenges of living a normal life. Eventually they all crack. While they certainly have faults (one of them completely fails at baking a cake for Aurora’s 16th birthday, and another makes the ugliest dress I’ve seen in these movies), they’re generally wise and they’re good foster parents.

But the most interesting character is by far Maleficent herself. She is quite possibly the greatest Disney villain of all time, meant to represent evil in general. She’s a very powerful sorcerer, with an army of pig-like creatures and a pet crow. A crow is a good choice considering they are very intelligent birds (seriously, crows are problem solving smart and they can remember human faces). At the end of the movie, she unleashes her magical powers in some very impressive ways and eventually transforms herself into a dragon. Everything about Maleficent is hardcore.

The music in this movie works well too. Once Upon a Dream is the most repeated song in the movie, and it’s a nice romantic tune to serve as an emotional center. There are only a couple other songs, like the drinking song and the opening “Hail to the Princess Aurora”. The music sounds soft during the calmer scenes, while it gets intense and kind of epic during the action. Aurora’s voice really is beautiful in this movie. Considering the three fairies gave her magical blessings at the start of the movie, and one of those was a good singing voice, it made sense for Disney to hire opera singer Mary Costa to voice Aurora. 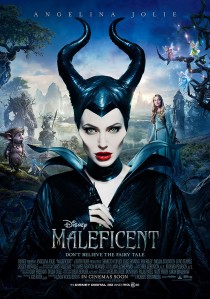 In preparation for this post, I also watched 2014’s Maleficent, which told an alternate version of this story starring Maleficent herself. To make a long story short, I really didn’t like it. It seems to be a recent trend in Disney movies where there isn’t really a villain, so they decided to turn what is quite possibly the greatest villain in Disney history into an anti-hero of sorts. In their attempt to make Maleficent sympathetic, they turned the king into a completely unrepentant tyrant who cut Maleficent’s wings off in a blatant rape analogy. He never shows any kind of regret for betraying someone he used to love – not even in their final showdown. It’s tonally inconsistent, with dark first and third acts, but a light-hearted and whimsical second act that’ll make you ask who this movie is made for. It goes for the same kind of true love twist that Frozen did the year before, but Frozen did it much better. Here, it just feels flat and artificial.

They turned the delightful fairy trio into a group of completely incompetent caretakers who are more annoying than anything else. The love story between Aurora and Phillip is so rushed that they might as well have removed it completely. The conflict between the fairyland and the kingdom feels forced and silly, and the humans are so overpowered by the magical creatures that one must wonder why the human kingdom wasn’t defeated years ago. There’s an overabundance of CGI that makes this attempt at a dramatic movie feel silly. I’ll give the movie this much – Angelina Jolie does a great job as Maleficent with the material she’s given. She’s terrifying when the script needs her to be, and she’s soft and kind when she starts to enjoy Aurora’s company. The rest of the cast fails in all sorts of different ways though. I could go on, but I don’t care enough and this post is long enough as it is.

Back to Sleeping Beauty.

There are a few things I feel would have improved the movie a bit. I would have liked to see some dialogue when Prince Phillip woke up Aurora. Giving Phillip at least a few lines of dialogue during the epic climax would have made the climax feel more intense and meaningful as well. But for the most part, this movie is really good. The rushed romance is something Disney is going out of its way to avoid these days, but Sleeping Beauty doesn’t feel nearly as dated as I expected it to. That’s not to say it doesn’t feel like it was made in the 50’s – it does, but in a way that feels timeless. If you’re interested in these kinds of movies, or your kids like them, I would recommend this one.

As for whether I prefer Sleeping Beauty or Cinderella, I’ll save that for the next post. After that, the next Disney animated feature is 101 Dalmatians.

I am a relatively new comic book fan writing this blog for other new comic book fans and/or people who are interested in comics but don't know where to start. I've always been interested in writing, to the point where I have a college Creative Writing Certificate and I'm currently a year 2 Journalism student. I also have another blog where I mostly make fun of bad movies - www.healed1337.blogspot.com As for how I got into comics, I've always had a passing interest in superheroes: most notably Batman, Spider-man and the X-Men. Until February of 2011 (I think,) my only experience with any of these franchises came from the movies and video games. Shortly after I bought Marvel Vs. Capcom 3 however, I decided to check out X-23, Wolverine's female clone. I ended up reading her Innocence Lost origin story and enjoyed it. From there, I started reading various X-Men comics and it quickly exploded into my newest hobby. My other interests/hobbies include video games, movies, music, playing sports, my dogs and weird news.
View all posts by healed1337 →
This entry was posted in movies and tagged angelina jolie, animated movies, animation, disney, disney princess, fairies, fairy tale, hail to the princess aurora, lady and the tramp, maleficent, mary costa, movies, once upon a dream, prince phillip, princess aurora, sleeping beauty, walt disney. Bookmark the permalink.