Disney Animated Movies 22 – The Many Adventures of Winnie the Pooh 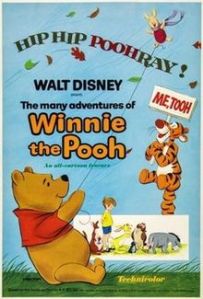 1977 was kind of a big year for movies. James Bond’s The Spy Who Loved Me, which many consider an example of everything that makes James Bond great, and the recently deceased Roger Moore’s best Bond movie. I agree with that consensus. Steven Spielberg released Close Encounters of the Third Kind, a touchstone in sci-fi movies. Saturday Night Fever, the greatest Disco themed movie in existence, released as well. There was A Bridge Too Far, a movie that very accurately portrayed World War II and some of the allies’ weaknesses, also came out. It wasn’t received too warmly at the time because of how anti-war the movie is, but it’s now considered a great movie. Oh, and there was a little movie called Star Wars somewhere in there, but who cares about Star Wars these days?

That year, Disney’s main animation studio released two features. The first, The Many Adventures of Winnie the Pooh, was the last movie ever released that Walt Disney himself was directly involved with. It’s a movie that ties together three previously released short films, the first two of which Walt produced himself, the second of which released shortly after he died. Winnie the Pooh is based on British author A.A. Milne’s works. Walt always wanted to turn Winnie the Pooh into a feature film, but figured that Pooh wasn’t well known outside of British audiences, so he began with short films to be released along with other films.

The first short, Winnie the Pooh and the Honey Tree, released along with The Ugly Dachshund. There’s hardly any information about that movie online, so I guess it wasn’t that memorable. They eventually combined the three shorts, adding in a bit of extra material to bridge them together, and double-billed Winnie the Pooh’s first feature film along with Escape from the Dark. Again, nobody seems to remember the live action Escape from the Dark. That one has yet to receive a wide DVD release.

I remember enjoying The Many Adventures of Winnie the Pooh as a little kid, and I can see why. The movie stars a bunch of likeable characters in silly little adventures. With the exception of the human boy Christopher Robin and the Owl, the rest of the characters are sentient stuffed animals living in the enchanted forest. Winnie is an optimistic bear with limited brain power and an obsession with eating honey. Piglet is a little pig who stutters a lot and is easily frightened, but he gets along with everyone and he’s kind of intelligent. Eeyore is a pessimistic, gloomy donkey, but he’s still kind to everyone else. Rabbit’s species is self-evident, and he sees himself as a practical rabbit, but his plans rarely turn out as he hopes. And then there’s the awesomeness that is Tigger. There are other characters too, but these are the most prominent here.

Also, since Christopher Robin is a boy, and each of these shorts were released years apart, Christopher has a different voice actor for each short. In fact he suddenly turns kind of British in the third short.

The first short, Winnie the Pooh and the Honey Tree, is about Winnie first trying to get honey from a hive way up in a tree, and later getting stuck in Rabbit’s front door after he eats too much honey. It’s a kind of amusing tale that ends in a humorous way. Winnie the Pooh and the Blustery Day introduces Tigger, and also features heavy wind and the chaos it creates. There’s also a moment that’s kind of like the Pink Elephants scene in Dumbo, just not quite as weird. Winnie the Pooh and Tigger Too focuses mainly on Tigger, where he bounces around for a while, bugs Rabbit with his boundless optimism and energy, and eventually gets stuck in a tree.

I can see why I enjoyed this as a kid, but this might have been the first Disney movie I stopped watching as grew older. During my early teen years I often tried to grow up a bit too fast and looked down on kids movies in general. I remember thinking it was silly that my one math teacher in High School’s favourite character was Tigger, and that she wore a Tigger costume to school on Halloween. Now, I get it. I didn’t like this as much as I used to, but there is a clear market for adults enjoying this kind of entertainment.

The Many Adventures of Winnie the Pooh about a bunch of likeable characters experiencing little adventures. The whole movie feels laid back. The songs are catchy jingles with fun wordplay. The art style is meant to imitate the original books, and it does a fantastic job at that. I didn’t personally enjoy this one that much – in fact I fell asleep in the middle of watching it at first, but in a way that’s a good thing. It’s just a relaxing movie. Younger kids will enjoy it, and I’m sure certain types of older kids and even adults will too.

After this movie, we enter what’s sometimes referred to as Disney’s Dark Age. It’s during this era that Disney almost went completely bankrupt, and this time they couldn’t blame that on World War 2. Their animated features took a lot longer to release than when Walt Disney was alive, and they were never as successful as the likes of Snow White, Cinderella or The Sword in the Stone.

Next up is The Rescuers. If I wait until June 22 to talk about that, I would actually talk about that movie on its 40th anniversary. Not going to do that though, because even if I’m not enjoying every individual movie, I’m enjoying this blog series and I want to get to the Disney Renaissance as soon as possible. After The Rescuers, it’s The Fox and the Hound, followed by the biggest flop in Disney Animation history – The Black Cauldron.

I am a relatively new comic book fan writing this blog for other new comic book fans and/or people who are interested in comics but don't know where to start. I've always been interested in writing, to the point where I have a college Creative Writing Certificate and I'm currently a year 2 Journalism student. I also have another blog where I mostly make fun of bad movies - www.healed1337.blogspot.com As for how I got into comics, I've always had a passing interest in superheroes: most notably Batman, Spider-man and the X-Men. Until February of 2011 (I think,) my only experience with any of these franchises came from the movies and video games. Shortly after I bought Marvel Vs. Capcom 3 however, I decided to check out X-23, Wolverine's female clone. I ended up reading her Innocence Lost origin story and enjoyed it. From there, I started reading various X-Men comics and it quickly exploded into my newest hobby. My other interests/hobbies include video games, movies, music, playing sports, my dogs and weird news.
View all posts by healed1337 →
This entry was posted in movies and tagged A.A. Milne, animated, animated movies, animation, christopher robin, disney, disney movies, disney studios, eeyore, movies, piglet, pink elephants, rabbit, the many adventures of winnie the pooh, tigger, walt disney, winnie the pooh. Bookmark the permalink.