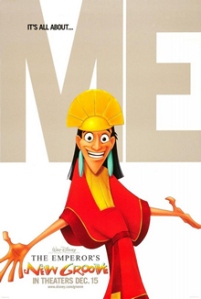 Now here’s a movie with a fascinating backstory.

The Emperor’s New Groove is the last of Disney Animation Studio’s three features released in the year 2000. Released half-way through December of that year, it earned $169 million on a $100 million budget. It premiered in fourth behind the strong competition of What Women Want, “Dude, Where’s My Car?” and How The Grinch Stole Christmas. That means it earned significantly less than Dinosaur, and worse yet, Hercules.

One could say this movie began Disney’s true downward spiral that would dominate the early 2000’s. Despite this, most critics praised the movie. It did make a profit, and it spawned a straight to video sequel and a short-lived TV series. Critics complimented the movie’s comedy, unique characters and its fast pace, however a lot of people criticized its art style and its lack of drama.

I first saw this movie a few months after it released on video. There were a couple summers around that time when a bunch of friends of mine held regular movie nights during the summer, and this one girl I used to have a crush on enthusiastically brought this movie out for one of these movie nights. I never liked the look of the trailer, but I watched it all the same. I kind of liked it. Some of the jokes are pretty funny, but I find the style of comedy a bit obnoxious and a touch trying at times. Not quite annoying mind you, but trying enough that I didn’t feel like paying attention. The movie came up on another movie night about a year later, and I felt pretty much the same way about it the second time. After finally watching it again last night, I still feel pretty much the same way. It’s ok.

The Emperor’s New Groove’s production cycle was a troubled one to say the least. Originally titled Kingdom of the Sun, it was intended to be an epic musical about a greedy, selfish Inca emperor. He found a peasant that looked a lot like him, and he’d swap places to escape the palace to have some fun. Kind of like Mark Twain’s The Prince and the Pauper. There’s an evil witch who wants to destroy the sun to stay young forever. When she discovers the Prince’s decoy, she turns the real prince into a llama and threatens the peasant to obey her or be exposed for what he is. The emperor would learn humility while he’s stuck as a llama, and even fell in love with a female llama herder.

The pitch was accepted back in 1994, shortly after The Lion King’s massive success. Elton John agreed to help out with the movie’s music after his Lion King songs helped the movie’s success, as long as they agreed to document the movie’s production. That documentary, The Sweatbox, was hidden from public eyes for nearly 12 years until it leaked online in 2012, because it showed how troubled the production was and how many of Sting’s songs they cut out. More on that later.

Producer Randy Fullmer and Director Mark Dindal agreed to change the movie’s direction completely when Pocahontas and The Hunchback of Notre Dame didn’t perform as well as expected, against Rogers Allen’s wishes. Allen, who co-directed The Lion King, pitched the original idea. When he saw the movie change so drastically, he left the project entirely. Other people left the project in disgust to work on other upcoming Disney works, and Elton John left, to be replaced by Sting.

Even Sting’s involvement was reduced when they chose to only give him an opening and closing song, which he declined to sing himself. When Sting learned of the movie’s planned ending, he wrote a very scathing letter blasting the movie’s portrayal of the indigenous population. It’s a subject he took very seriously throughout his career. They changed the ending after that, and Sting decided to stay on.

Apparently Sting wrote 6 songs for the movie, and they only ended up keeping one or two. I haven’t yet watched The Sweatbox, but I intend to after I’m done this Disney Animated Movie blog series. It was very well received and it sounds like a fascinating look at Disney’s downfall from the Renaissance period. It’s fairly easy to find online if that interests you.

The movie stars Emperor Kuzko, a spoiled Inca ruler who cares about nobody but himself. He’s overly critical of the potential brides shown to him, fires one of his key advisors just because she’s starting to get old and wrinkly and is planning to build his vacation home where a peasant family has lived for generations. The fired advisor happens to be an alchemist, who uses one of her potions to turn Kuzko into a llama. She intended to kill him, but he turned into a llama instead.

The movie is mostly a fast paced comedy. Kuzko needs help from the very peasant, Pacha, whose home is being threatened by the emperor’s vacation home. Along the way, Kuzko does learn some humility, but he’s still an obnoxious, fun loving Emperor who doesn’t seem to take his job too seriously.

There is some good stuff in this movie. Kuzko’s narration often highlights how he sees the world, and it’s sometimes funny. There are moments that make fun of frequently used zooming effects in movies, in amusing ways. Pacha is a good character who helps the Emperor, despite the fact that he might lose his home if Kuzko doesn’t change his mind. This leads to several arguments between them, and while they could have all sounded the same, there’s enough variety in the writing that their arguments never become stale. The movie often makes fun of clichés like the falling chandelier in creative ways. It’s not nearly enough to make this movie a classic, but it’s at least watchable.

The comedy doesn’t always work though. There are some comedic scenes that go on way too long, like the restaurant scene where Kuzko and his fired assistant keep popping in and out of the kitchen at exact opposite times. There are a lot of visual jokes that might make kids laugh, but adults will more likely roll their eyes. The movie never quite annoyed me, but I tuned out of several scenes. Because of the movie’s overly comedic tone and Kuzko being so vain, it’s hard to care about this movie’s attempts at drama. You don’t really feel anything for any of the characters; not even the wrongfully fired villain. You don’t care that much when Kuzko finds himself sitting alone in the rain. In the end this movie feels a lot like Hercules.

The Emperor’s New Groove is better than Hercules though. It’s funnier, there isn’t any lame CGI and it has actual characters.

The art style is much simpler than a lot of earlier Disney movies. That’s mostly thanks to the massive production changes and the rapidly approaching release date they faced. They chose to reduce animation costs as a direct result. That’s not to say it’s bad. The art style is unique in a way that perfectly fits the movie’s tone. They focused more on the characters than the environments, and it works perfectly fine. With the exception of Pacha, who is by far the most human of all the characters, each character shows a unique style of body language. The villain’s poses are often inspired by runway models and fashion magazines. Kuzko’s llama animations were based on a couple years of studying llama movements. It is a creative visual design – it’s just not technically impressive by any means.

There’s really nothing to talk about with the music. What was once planned as an epic musical eventually turned into a straight comedy. There’s an energetically groovy song at the beginning that’s supposed to pump you up, and one at the end that sounds almost identical. The soundtrack matches the movie’s tone. There’s a song during the credits that’s basically a pop number. Not sure what else to say really.

When I learned about the movie’s original plan, I can’t help but wonder what could have been. A second epic musical with one of the Lion King’s co-directors about an Inca emperor learning humility? Either Elton John or Sting writing all the songs? That sounds awesome. Too bad we’ll likely never see that.

This movie is hard to recommend. It’s not bad by any means, in fact I kind of enjoyed it, but there are far better comedies out there. There are far better animated comedies out there. The movie contains hints of the potential epic it could have been, but I wouldn’t have noticed if I didn’t read about this movie’s production troubles first. Of course if you’ve seen and enjoyed this movie in the past, you’d probably still enjoy it now.

Next up is Atlantis: The Lost Empire, followed by Lilo & Stitch. After that it’s the start of a string of 7 Disney movies I’ve never seen before, Treasure Planet. I’ve heard that what comes after that are the three worst animated Disney movies ever. Help me.

Now that I’ve done movie number 40, there are only 16 movies left. If I pace it at 4 a week, I’ll be done in about a month. Sounds like it’s worth a try. Once I’m done though, I’ll be taking a break from talking about movies. Don’t get me wrong, I still enjoy doing this, but I don’t want to get tired of all these movie posts. After that, I’ll probably do another movie series. If I do, it’ll be a lot shorter. At this point my three options are Star Trek movies, James Bond movies and all the X-Men movies. I’m open to hearing which of those three you’ll prefer.

I am a relatively new comic book fan writing this blog for other new comic book fans and/or people who are interested in comics but don't know where to start. I've always been interested in writing, to the point where I have a college Creative Writing Certificate and I'm currently a year 2 Journalism student. I also have another blog where I mostly make fun of bad movies - www.healed1337.blogspot.com As for how I got into comics, I've always had a passing interest in superheroes: most notably Batman, Spider-man and the X-Men. Until February of 2011 (I think,) my only experience with any of these franchises came from the movies and video games. Shortly after I bought Marvel Vs. Capcom 3 however, I decided to check out X-23, Wolverine's female clone. I ended up reading her Innocence Lost origin story and enjoyed it. From there, I started reading various X-Men comics and it quickly exploded into my newest hobby. My other interests/hobbies include video games, movies, music, playing sports, my dogs and weird news.
View all posts by healed1337 →
This entry was posted in movies and tagged animated, animated movies, animation, comedy, disney movies, disney studios, incan empire, kuzko, mark dindal, movies, pacho, randy fullmer, roger allen, south america, sting, the emperor's new groove, the sweatbox. Bookmark the permalink.