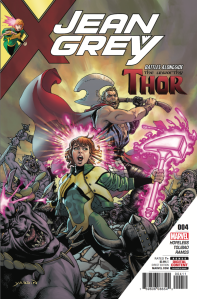 Ever since time displaced Jean Grey received a vision of the Phoenix Force heading straight to her, she’s been on a journey to find whatever help she can. She sought out most of the former Phoenix Force hosts for advice, but none of them offered much comfort. In the previous issue, she met up with Namor and received her soundest advice yet, but still no clear answers to her problem. With her new intention to try and fight the Phoenix away from possessing her, she’s now searching for Thor. That’s where today’s issue comes in.

Jean Grey 4, written by Dennis Hopeless, takes place entirely in Jotunheim. It starts off with her hiking up a mountain to a bar where Odinson is supposed to be, but she runs into a small army of Orcs intending to kill him when he’s weak. That’s the first of several things the writing does well – it introduces the conflict before Jean even meets Odinson. When she does meet up with him, he appears to be drunk out of his mind in a mostly abandoned bar. It almost seems like there’s no real hope when it takes a while for Odinson to even seem to notice her presence. It makes for an amusing moment when Thor’s first bit of dialogue is a belch.

As the fight goes on, Odinson keeps telling stories about his past adventures, despite Jean’s insistence that he focuses on the fight first. It’s amusing when you read it the first time and it feels very much like something Thor would do while he’s fighting an opponent he doesn’t take too seriously. Meanwhile, Jean struggles through most of the fight, until she manages to create a psychic hammer for a moment. After the fight, Thor reveals that he knew the Orc attack was coming and wasn’t nearly as drunk as he pretended to be. It turns out he’s telling these stories to try and prove a point – his method of trying to teach Jean how to be a warrior. After reading this comic a second time it’s not as funny, but at the same time it feels like a smarter read. Everything ties together quite well.

The art by Harvey Tolibao is great. The opening pages on the mountains of Jotunheim are very well detailed, with snow covered cliffs, shadows beneath the cliffs and the occasional rocks showing through the ice sheets. Jean clearly packed well for the journey, with her climbing equipment, a Jean Grey coat and Pickles keeping warm in her hiking backpack. The bar interior is even more detailed with its variety of furniture laid out, half used candles on the walls and a display of drinks behind the counter. Facial expression and body language perfectly convey emotion, like Jean almost falling asleep when Thor won’t stop telling stories. Thor’s blank expression when he belches is great, and his much more focused look after the fight sells that he planned the whole thing. Even if he still looks a touch drunk. Jay David Ramos and Dono Sanchex-Almara share colouring duties, and it’s all great. The snowy landscape is bright, with a blue sky and Jean’s green coat and red hair bringing variety to the white landscape. It’s an overall bright and colourful comic, with good use of shadows in the bar and glowing when Jean uses her psychic hammer.

This comic seems to work better on a second read than the first, and I liked it the first time. It’s great how each issue of this series so far has a bit of a one-off story, with Jean’s search for answers tying them all together. This is a very character driven series, and every issue so far is an easy first issue for newcomers by design of the story. The advice Odinson gives Jean is very effective even if he gave it in a clunky manner (fitting for his character), and it gives her a bit more of a clear direction moving forward. Jean Grey fans should check out this series, and this particular issue isn’t a bad Thor comic either.

I am a relatively new comic book fan writing this blog for other new comic book fans and/or people who are interested in comics but don't know where to start. I've always been interested in writing, to the point where I have a college Creative Writing Certificate and I'm currently a year 2 Journalism student. I also have another blog where I mostly make fun of bad movies - www.healed1337.blogspot.com As for how I got into comics, I've always had a passing interest in superheroes: most notably Batman, Spider-man and the X-Men. Until February of 2011 (I think,) my only experience with any of these franchises came from the movies and video games. Shortly after I bought Marvel Vs. Capcom 3 however, I decided to check out X-23, Wolverine's female clone. I ended up reading her Innocence Lost origin story and enjoyed it. From there, I started reading various X-Men comics and it quickly exploded into my newest hobby. My other interests/hobbies include video games, movies, music, playing sports, my dogs and weird news.
View all posts by healed1337 →
This entry was posted in comic, comic review and tagged all-new marvel, comic review, comics, dennis hopeless, dono sanchez-almara, harvey tolibaro, jay david ramos, jean grey, jotunheim, marvel comics, odinson, phoenix force, thor, x-men. Bookmark the permalink.