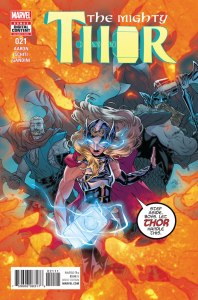 The previous issue of Mighty Thor mostly focused on Volstagg taking care of kids in the middle of a war situation. It started off as hopeful and optimistic, but turned tragic when the kids were killed. The ending showed Volstagg picking up the ultimate Universe’s Mjolnir and becoming The War Thor. I was somewhere between excited to see what would become of this and nervous about what writer Jason Aaron is doing with Volstagg, a normally upbeat and optimistic character. Whatever you feel about it, this issue focuses mostly on him unleashing his newfound power.

Most of this issue takes place in Nidavellir, the realm of the dwarves. It’s under siege by The Queen of Cinder’s army of fiery monsters, and it looks like the dwarves are in trouble. Mountains are on fire. The fire monsters are attacking from both the ground and the air. And then a massive storm shows up, and The War Thor starts destroying the enemy. Whatever you think of Volstagg becoming such an angry Thor, the action scene is really epic. After the Enchantress and the king of trolls appear, Volstagg shows off some of the ultimate hammer’s unique qualities compared to the main universe’s hammer. Namely that it can deflect magical attacks. Besides the action, there’s a small moment updating us on what happening with Jane Foster after she collapsed at the end of the previous issue. Without spoilers, it feels like we’re building up to the end of Jane Foster’s run as Thor.

The art by Valerio Schiti is great. The opening page shows the dwarf realm covered in fire and lava, with tall mountains and smoke in the backgrounds.  It’s very well detailed and sets the scene quickly. All of the action feels big, with massive storms and tornados in the backgrounds while Volstagg is blasting fiery monsters with lightning and smashing them with his hammer. The fury in his eyes perfectly demonstrates his mindset at the time. The Enchantress’s look of shock when the hammer deflects her magic attack ads in a touch of fear that works absolutely perfectly. The colouring by Veronica Gandini is also great. Despite the overly red look of the realm on fire, there’s a lot of colour variety thanks to the black clouds, the blue lighting and the Enchantress’s overall green look.

I get why someone may be nervous about Volstagg going full blown dark, but there’s a moment where he’s briefly separated from the hammer and he starts to snap to his old self. It suggests that the War persona is more from the hammer than it is from Volstagg himself. That may not ease everyone’s concerns, but is a neat extra angle. Either way this is a very intense, action focused issue. The fighting is awesome, but how you feel about the comic may depend on your thoughts regarding Volstagg becoming the War Thor. I enjoyed this comic, but I’m not sure whether to recommend it or not.

I am a relatively new comic book fan writing this blog for other new comic book fans and/or people who are interested in comics but don't know where to start. I've always been interested in writing, to the point where I have a college Creative Writing Certificate and I'm currently a year 2 Journalism student. I also have another blog where I mostly make fun of bad movies - www.healed1337.blogspot.com As for how I got into comics, I've always had a passing interest in superheroes: most notably Batman, Spider-man and the X-Men. Until February of 2011 (I think,) my only experience with any of these franchises came from the movies and video games. Shortly after I bought Marvel Vs. Capcom 3 however, I decided to check out X-23, Wolverine's female clone. I ended up reading her Innocence Lost origin story and enjoyed it. From there, I started reading various X-Men comics and it quickly exploded into my newest hobby. My other interests/hobbies include video games, movies, music, playing sports, my dogs and weird news.
View all posts by healed1337 →
This entry was posted in comic review, comics and tagged comic review, comics, dwarves, jane foster, jason aaron, marvel comics, marvel now, Mjölnir, Nidavellir, odinson, the mighty thor, the war thor, thor, valerio schiti, veronica gandini, volstagg. Bookmark the permalink.

2 Responses to The Mighty Thor 21 review