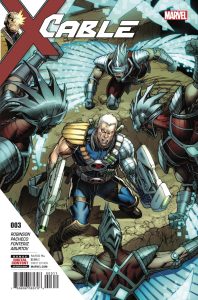 My thoughts on the first two issues of Cable’s new solo series are pretty much the same. The art is fantastic and the action is pretty good, but there’s basically no story. Or at least, the story wasn’t revealed enough to know why we should care. He was just chasing someone through time and fighting those he armed with technology far too advanced for their era. Cable 3 finally gives us some answers.

Written by James Robinson, this issue mostly takes place during the Mayan Empire’s reign in South America. As with the first two issues it begins with a fight scene, but Cable soon meets a priest who is more than willing to help out. They sneak into the priest’s hidden chamber in the temple, where they converse on what’s going on. The story has some interesting mythology behind it, like a “time sword” with roots dating back to the Eternals/Inhumans war. Conquest, the man Cable is chasing, is trying to reassemble the sword, which has pieces scattered throughout time and space. It’s not what I would call an amazing story, but it’s enough to keep me interested for the next few issues at least. All of these details probably should have been revealed in the previous issue though, instead of having two comics that were heavy on action and very light on story.

Like the first two issues, Carlos Pacheco’s art is fantastic. The backgrounds are brilliantly detailed, like the forests with a variety of tree types and the occasional rocky landscape, and the fully detailed Mayan temple with a touch of futuristic technology hidden inside. Facial expression perfectly convey emotions, like the Priest’s focus as he’s showing Cable the technology gifted to them by the aliens, Cable’s rage when he’s fighting warriors with technology that doesn’t belong, and the slightly bored look in a guard’s eye as he walks by the sneaking pair just outside of a temple. Unfortunately the art drastically changes in style and quality for the last three pages with a more stylized look and a lot less detail.  That’s not to say that Thony Silas’s art is bad, but it’s a jarring change. The colouring by Jesus Aburtov is brilliant, with glowing tech weapons, great use of shadow and just an overall very colourful comic. Federico Blee and Dono Sanchez-Almara are also credited with colouring.

I wouldn’t call this issue great, but it’s a huge improvement on the first two issues from a writing standpoint. It gives the story a clear direction and some much needed answers. Cable is the same hard-edged fighter he’s always been, so those familiar with him already know whether they enjoy that or not.  The art change is jarring and holds this issue back a bit. If you’re a Cable fan this series is worth checking out, but I don’t think it’s worth recommending if you’re not a fan of the character. Personally I enjoyed it enough for at least the next few issues, but I’m waiting for the “new mutants” story arc coming up after this.

I am a relatively new comic book fan writing this blog for other new comic book fans and/or people who are interested in comics but don't know where to start. I've always been interested in writing, to the point where I have a college Creative Writing Certificate and I'm currently a year 2 Journalism student. I also have another blog where I mostly make fun of bad movies - www.healed1337.blogspot.com As for how I got into comics, I've always had a passing interest in superheroes: most notably Batman, Spider-man and the X-Men. Until February of 2011 (I think,) my only experience with any of these franchises came from the movies and video games. Shortly after I bought Marvel Vs. Capcom 3 however, I decided to check out X-23, Wolverine's female clone. I ended up reading her Innocence Lost origin story and enjoyed it. From there, I started reading various X-Men comics and it quickly exploded into my newest hobby. My other interests/hobbies include video games, movies, music, playing sports, my dogs and weird news.
View all posts by healed1337 →
This entry was posted in comic, comic review and tagged cable, carlos pacheco, comic review, comics, dono sanchez-almara, federico blee, james robinson, jesus aburtov, marvel comics, marvel now, mayan empire, nathan summers, south america, thony silas, time travel, x-men. Bookmark the permalink.