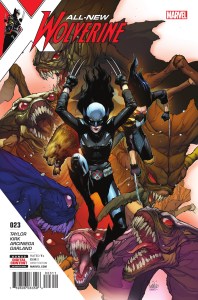 I could sum up this entire issue by saying it’s Wolverine and the Guardians of the Galaxy vs. the brood, but writing a full review takes more effort than that. This issue also deserves more than that.

All-New Wolverine 23, written by Tom Taylor, kicks off exactly where the last issue left off. Gabby, Laura’s clone sister, has been taken by the brood on an uncharted moon. Seemingly overwhelmed by the Brood army, the Guardians retreat. Even though Laura wants to charge forward, Drax tosses her over the wall and into the science station for her own good. It’s a quick yet intense beginning after a very intense final few pages last month.

The rest of this issue is balanced between story building, a bit of drama, and a lot of sneaking around. It turns out that the half destroyed moon base is an experimental medical station. Laura first came here after a virus landing on an alien ship nearly wiped out Roosevelt Island in New York City. This comic explains exactly what happened with the virus in the first place. I won’t explain everything, but they tried to unleash it on the brood to kill them. It only made them more aggressive. There are a couple jokes in this comic here and there, but for the most part this is a dark issue.

The situation on the moon is dire. Gabby, with her healing factor and her near lack of fear, fascinates the brood. It could end up hurting Gabby more than it helps her, and judging by her situation at the end of this issue, next month’s issue could get intense in more than one way. With no long range communications besides the Guardians’ ship, which is in the middle of Brood territory, everyone is trapped. But the Guardians, Laura, and extra guest star Fang (who we haven’t seen since Wolverines 12), are determined to fight anyway. Through most of this issue’s second half, Laura, Gamora and Star Lord are sneaking into the Brood caves, giving Wolverine a chance to show off both her stealth skills and her leadership qualities. You can tell she’s focused and angry, and it’s hilarious how, while they’re sneaking around, Star Lord feels useless with only his noisy guns on hand.

The art by Leonard Kirk is great. The opening fight scene is intense, with the base’s energy weapons firing upon the brood, plenty of the aliens in the background and clear damage on Laura’s bulletproof suit. The brood will do that. The aliens each have a distinct look, but you can tell they all belong to the same species. The background detail in the base is impressive, with a clean outward appearance straight out of a science fiction movie, fancy monitoring equipment, and various storage containers around the place. The damage on Laura’s outfit remains consistent throughout the issue.

The violence in the stealth portion of the comic is appropriately brutal, making great use of Laura’s clear fury in her eyes in some panels, and showing her silhouette in front of brood aliens in others. Facial expression are well drawn throughout the comic, but Gabby’s facial expression in the brood caves are particularly good. She starts off with clear fatigue and confusion when she wakes up, but she soon shows fury when she starts threatening the aliens, and then her disgust is clear when the brood declare their intentions with her. Michael Garland and Erick Arciniega share colouring duties, and they do a good job. The comic is appropriately dark and gritty looking, and there’s great use of shadows and glows from energy weapons and light reflecting off of Laura’s claws.

This is a great comic. It feels a lot darker than most issues in this series, fully embracing the story’s horror elements. There are still a few jokes and lighthearted moments here and there, but it’s intense from start to finish. It’s always fun to see Laura unleash her stealth abilities, and she really does it here. And best of all, Gamora joins in on the fun. Although I’d rather Laura not spend too much time in space, she and Gamora would make a deadly team. This particular story arc feels more like a classic Wolverine story in its darker setting, yet it still perfectly fits the All-New Wolverine style. X-23 fans should be reading this series, and it’s well worth checking out for fans of the original Wolverine as well.

I am a relatively new comic book fan writing this blog for other new comic book fans and/or people who are interested in comics but don't know where to start. I've always been interested in writing, to the point where I have a college Creative Writing Certificate and I'm currently a year 2 Journalism student. I also have another blog where I mostly make fun of bad movies - www.healed1337.blogspot.com As for how I got into comics, I've always had a passing interest in superheroes: most notably Batman, Spider-man and the X-Men. Until February of 2011 (I think,) my only experience with any of these franchises came from the movies and video games. Shortly after I bought Marvel Vs. Capcom 3 however, I decided to check out X-23, Wolverine's female clone. I ended up reading her Innocence Lost origin story and enjoyed it. From there, I started reading various X-Men comics and it quickly exploded into my newest hobby. My other interests/hobbies include video games, movies, music, playing sports, my dogs and weird news.
View all posts by healed1337 →
This entry was posted in comic review, comics and tagged all-new marvel, all-new wolverine, brood, comic review, comics, drax, drax the destroyer, erick arciniega, gabby, gamora, guardians of the galaxy, laura kinney, leonard kirk, marvel comics, marvel now, michael garland, peter quill, star lord, tom taylor, wolverine, x-23. Bookmark the permalink.