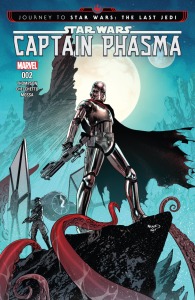 The Journey to The Last Jedi continues here, with the second chapter of Captain Phasma’s mini-series. The first issue took place during the destruction of the Starkiller Base. Phasma just escaped the garbage chute. Before she could delete the files showing that she disabled the shields, one other officer with access learned of her actions. Her mission is clear – kill the officer to save her reputation.

Captain Phasma 2, written by Kelly Thompson, begins in space. She’s flying a tie-fighter after the other officer’s own, along with a gunner and a First Order BB unit. Since the officer’s hyperdrive is disabled, and Phasma’s guns aren’t working due to incomplete repairs, they land on a planet with unstable weather patterns. This comic has a much slower pace than the first issue. It takes some time to introduce Phasma’s co-pilot, exploring this strange planet and building up an isolated feeling. There are also some very minor hints into Phasma’s past while keeping her mysterious aura alive and well. I won’t talk too much about what else happens in this comic, but there is a bit of action and an intriguing backstory for the planet.

The art by Marco Checchetto is fantastic. The brief fight in space is highly detailed with the starry sky, the tie fighter cockpit with its displays and controls, and a bunch of space rocks floating above a planet. The planet continues the detail with its active waves on the beach, stones bouncing around when the BB unit falls down a slope, and a village that seems to be abandoned. Andres Mossa’s colouring is also brilliant. Most scenes are a bit colour coded by their environments, like the red interior of the tie fighter and the blue tint of the planet. Besides that, this is a colourful book with realistic looking reflections off of Phasma’s shiny armour and the heavy use of shadows to enhance the isolation mood.

The first issue in this series is fun, and makes great use of Phasma’s log that clearly contradicts what’s going on. This comic takes on a completely different tone, but it works perfectly for both the story and the characters. Most character development comes in the form of Phasma’s determination and the balance between following regulations and bending them to suit the situation. If Phasma is in The Last Jedi a lot more than The Force Awakens, and her portrayal here is a good indication, then we’re in for a treat this December.

I am a relatively new comic book fan writing this blog for other new comic book fans and/or people who are interested in comics but don't know where to start. I've always been interested in writing, to the point where I have a college Creative Writing Certificate and I'm currently a year 2 Journalism student. I also have another blog where I mostly make fun of bad movies - www.healed1337.blogspot.com As for how I got into comics, I've always had a passing interest in superheroes: most notably Batman, Spider-man and the X-Men. Until February of 2011 (I think,) my only experience with any of these franchises came from the movies and video games. Shortly after I bought Marvel Vs. Capcom 3 however, I decided to check out X-23, Wolverine's female clone. I ended up reading her Innocence Lost origin story and enjoyed it. From there, I started reading various X-Men comics and it quickly exploded into my newest hobby. My other interests/hobbies include video games, movies, music, playing sports, my dogs and weird news.
View all posts by healed1337 →
This entry was posted in comic, comic review and tagged andres mossa, battle of starkiller base, captain phasma, comic review, comics, kelly thompson, marco checchetto, marvel comics, star wars, star wars comics, star wars the last jedi, star wars: the force awakens, starkiller base, the first order, the force awakens, the last jedi, tie fighter. Bookmark the permalink.