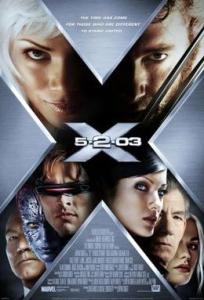 Usually when I wrote these posts about Disney movies I’d seen before, I talked about my first time viewing it. Yet I didn’t do that with 2000’s X-Men. Why? Because I actually saw X2 first, and then watched X-Men after I bought both movies in a DVD 2-pack. I still have that physical 2-pack in its shiny blue box.

X2: X-Men United introduced me to the X-Men franchise, and there’s a chance I wouldn’t be an X-Men fan without it. I remember first seeing it the second night of an all-weekend kids event I was helping out with. Back when I was a kid there, we’d usually take way too long to get to sleep at night, often frustrating the leaders. At some point between me being in a group of 30 boys in sleeping bags in one big room and becoming one of the helpers, someone came up with the brilliant idea of showing a movie to help the kids calm down. One of the movies they played was X2: X-Men United. I enjoyed it a lot and bought the two pack as soon as I could.

X2: X-Men United released in May of 2003. It was a massive success for the time, earning $407 million on a $110 million budget. At the time of its release, it was the second highest grossing Marvel based movie of all-time, behind only the previous year’s Spider-Man. Most critics agreed that it improved on the first movie in every way, and how the performances in general were better than normal for a superhero movie.

While the first X-Men movie isn’t based on any X-Men storyline as far as I can tell (merely borrowing a handful of other storylines instead), X2 is loosely based on the graphic novel, “God Loves, Man Kills”. I’ve previously written a post comparing the two, so I won’t go into too much detail on that front. But to sum up my thoughts, the movie does a fairly good job at taking the main story beats of the original graphic novel and expanding on them for a movie length experience. It ups the scale of the story, making the movie feel more epic. On the downside, it completely ignores one of the original story’s main themes – the difference between moderate religion and extremism. It’s a subject the movie doesn’t even attempt to touch. The graphic novel is also better paced and it utilizes its characters better.

Some of my opinions since writing that post have changed, most notably my thoughts on X-Men: First Class. But of my earlier movie posts, I feel like this one is probably my best.

Anyway, X2 continues the story of the X-Men, quickly catching viewers up on dangling plot threads from the first movie. The opening of Wolverine exploring Alkaline Lake is a good way to catch us up with his search for his past. It quickly re-establishes the slight rivalry between him and Cyclops after he returns, and the father/daughter style relationship he developed with Rogue in the first movie.

One thing you’ll quickly notice about X2 is that its cast is rather large. In addition to most of the characters from the first movie (only missing Sabretooth, Toad and the deceased Senator Kelly), you’ve got Iceman and Pyro having their roles massively expanded. You’ve got the introduction of Nightcrawler, the blue-skinned teleporter. You’ve got Colonel Striker, who in the XCU, seems to have a past with Wolverine. You’ve got Lady Deathstrike, who in the comics is a long-time rival of Wolverine’s. The remarkable thing is, with the exception of Cyclops who barely does anything and Lady Deathstrike who barely speaks at all, pretty much all of these characters get at least some sort of character development. It’s impressive how many characters the writers and director were able to juggle without X2 feeling overcrowded.

While in the first movie, Magneto serves as the main antagonist, the situation in this movie forces the X-Men and what remains of Magneto’s brotherhood to work together for their very survival. Striker is a military commander running a secret, experimental branch. While the president believes his goal is to contain the mutant threat, his real goal is to wipe out all mutants. If there’s one thing I think this movie handles far better than the original graphic novel, it’s the motivation behind Striker’s goals. He doesn’t start off by hating mutants. It’s the result of a bad situation with his mutant son with illusion powers, and how Striker can only see mutants as a problem that needs to end.

Striker ends up manipulating a lot of people, whether he misinforms the President, sets up assassination attempts with mind controlled mutants or tries to compel Wolverine to help him in exchange for answers. He’s a great villain in this movie, performed admirably by Brian Cox. Lady Deathstrike, who’s got very similar abilities to Wolverine, acts as his primary enforcer. She’s basically nothing like the comic version, and is just a mind controlled mutant in the movie. She does lead to one of the better fight scenes in the series though. And because I never cared much for the character in the comics, I won’t complain too much.

With Cyclops and Xavier captured for most of the movie (hence why Cyclops is basically not in this), the X-men are mostly made up of Wolverine, Storm, Jean Grey, and their temporary allies in Magneto and Mystique. Most of what I said about the returning cast in the previous post also applies here. Halley Berry is slightly better as Storm this time round, if only because she’s not attempting her terrible African accent this time. She’s still got none of the charisma of her comic counterpart though. Hugh Jackman is even better as Wolverine this time round, partly because he’s allowed to unleash in several action scenes. He really nails the confusion as his character starts rediscovering his past.

Iceman and Pyro are really expanded on in this movie. My feelings on Pyro in this movie are mixed. On the one hand, his slow development from a rebellious kid at the Xavier Institute is very well told, and when he unleashes his fire powers on the cops, he’s really intense. On the other hand, he sounds like a normal American kid here. In the comics, he’s Australian. Again, we’ll get to that more in X-Men: First Class, but it’s another chapter in the Americanization of the X-Men franchise in these movies. Although Pyro and Iceman are friends for most of this movie, there’s a clear tension between them that grows as Pyro leans more towards Magneto’s ideals. I have a lot of complaints about X-Men 3, but that’s one aspect they expanded on well in the next movie. As for Iceman, he’s fine. Never cared much about the character either way in the movies or the comics, but he’s fine.

Probably the best addition to the cast in this movie is Alan Cumming as Nightcrawler. Although the movie skipped out on the religions themes of the original graphic novel, it didn’t shy away from Nightcrawler’s strong Catholic faith or his past as a circus acrobat. I would have liked to see the contrast between his blue demon appearance and his faith explored more, but there wasn’t much room for it.  He’s a likeable guy who contributes to the climax without actively fighting. His interactions with Storm are particularly good, with the two of them encouraging each other in their own ways.

The visual effects, while not always good, are a massive improvement on the first movie. Sure, it looks kind of silly when Magneto first pulls the extra iron out of a prison guard’s blood during his escape sequence. Cyclops’s eye beams look a bit cheap when he unleashes them at one point. Apart from that, the explosions look much more real instead of the obvious green screen effects in the first movie. Pyro’s fire is well handled when he unleashes himself. Cerebro’s lights look neat. It’s still an early 2000’s movie so some effects look weak by today’s standards, but for the time they were mostly good.

I don’t want this to go on for too long, so let’s sum this up. With the entire mutant race threatened with extinction, the movie feels bigger than the first. Despite the large cast, there’s a strong balance between most of them in terms of character development and focus. A lot of the themes this movie touches on feel modern, and could be used as an allegory like the comic franchise. In doing so, the movie captures the spirit of the X-Men better than the first movie. But X2 isn’t without glaring problems, like Cyclops still being far more boring than he needs to be, shying away from the central themes of the graphic novel, and starting the trend of focusing the movies way too much on Wolverine. That last point isn’t a problem this time round, but it will be in X-Men 3.

Despite the problems I have with X2, I still really enjoy this movie. After all, it’s what introduced me to the X-men, which remains my favourite comic franchise. If someone asked me why the X-Men franchise is so special, I’d strongly consider pointing them to this movie as a starting point.

Next up is X3, which I haven’t watched in at least 10 years, followed by what is pretty much universally agreed upon as the worst of the X-Men movies, X-Men Origins: Wolverine. I’ve only seen that once, and I’m dreading watching it a second time.

I am a relatively new comic book fan writing this blog for other new comic book fans and/or people who are interested in comics but don't know where to start. I've always been interested in writing, to the point where I have a college Creative Writing Certificate and I'm currently a year 2 Journalism student. I also have another blog where I mostly make fun of bad movies - www.healed1337.blogspot.com As for how I got into comics, I've always had a passing interest in superheroes: most notably Batman, Spider-man and the X-Men. Until February of 2011 (I think,) my only experience with any of these franchises came from the movies and video games. Shortly after I bought Marvel Vs. Capcom 3 however, I decided to check out X-23, Wolverine's female clone. I ended up reading her Innocence Lost origin story and enjoyed it. From there, I started reading various X-Men comics and it quickly exploded into my newest hobby. My other interests/hobbies include video games, movies, music, playing sports, my dogs and weird news.
View all posts by healed1337 →
This entry was posted in comics, movies and tagged 20th century fox, alan cumming, bobby drake, charles xavier, cyclops, god loves man kills, halley berry, hugh jackman, iceman, lady deathstrike, magneto, movies, mystique, nightcrawler, ororo munroe, pyro, rogue, scott summers, storm, striker, superhero movies, william striker, wolverine, x-men, x-men movies, x-men united, x2: x-men united. Bookmark the permalink.