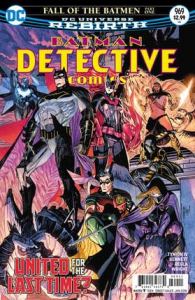 The previous issue saw the return of Tim Drake to the land of the living. It was a glorious return that actually included two Tim Drakes, one from a future where Tim became a murderous Batman after Batwoman apparently turned on the team, so he arrived terminator style to try to eliminate the problem before it happened. The story was just as intense and dramatic as one would hope – probably the best yet in an already fantastic series. This issue contains the reunion between Tim and Stephanie Brown, while also bringing back a previous villain team to kick off a new story arc.

Written by James Tynion IV, Detective Comics 969 covers a whole bunch of things at once. One, even if there’s no proof, there’s growing concern in the city that Batman is militarizing his work as a vigilante, and several people from both the political world and the criminal underground know about it. This leads to several moments, like Batman meeting up with the new mayor, where the scene cuts off right as the mayor asks “where does this end?” It’s pretty much the perfect place to end that scene with.

This issue feels like it’s somewhere between kicking off a new story and tying up loose ends after another. It’s one of those weird in-between issues, and it’s an enjoyable one. We see the reunion between Red Robin and Spoiler, and it’s a great moment that shows both characters rambling for entirely different reasons. It suits both their characters. There’s a scene where the team busts up an attempt at building their own villain team to counter Batman’s, and it’s kind of hilarious. The meeting between Batman and the mayor is somewhere between civil and tense, and it feels like that will lead somewhere in the future. There’s a lot going on in this issue, but it never feels rushed and you always feel something with every scene.

The art by Joe Bennett is great. There’s a lot of environmental detail, like the visiting room at the prison with the news on the TV, establishing shots near Spoiler’s hideout in the industrial side of town, and of course the nice mayor’s office complete with book shelves, an American flag and Batman hiding behind the curtain. The civilian clothes and hair styles are well-varied. Facial expressions do a great job at conveying emotions, like the mayor stern expressions, the sadistic look in the eyes of an anarchist at the end of the comic, and the brilliantly done sequence of Stephanie Brown’s reaction to seeing Tim again. Jason Wright’s colours are also great. Despite most of this comic taking place at night, it’s a bright and colourful comic, with great use of shadows that tend to enhance the mood of every scene.

I hesitate to call this comic great when it’s sort-of an in-between issue that covers a lot of stuff, but it does everything well. It’s amusing when it tries to be. Some of the conversations between really intelligent characters feel genuine and insightful. The tension building, both short term and long, is effective. If I have one complaint about this issue, and this is a complaint that one could come up with for a lot of comics these days, is that the solicitation text really doesn’t fit this issue’s tone. But that’s not a complaint about the actual comic itself. This is a Batman team book, and if you like any of the Batman characters on the cover, it’s well worth checking out. The series as a whole is consistently worth the read and I highly recommend it.

I am a relatively new comic book fan writing this blog for other new comic book fans and/or people who are interested in comics but don't know where to start. I've always been interested in writing, to the point where I have a college Creative Writing Certificate and I'm currently a year 2 Journalism student. I also have another blog where I mostly make fun of bad movies - www.healed1337.blogspot.com As for how I got into comics, I've always had a passing interest in superheroes: most notably Batman, Spider-man and the X-Men. Until February of 2011 (I think,) my only experience with any of these franchises came from the movies and video games. Shortly after I bought Marvel Vs. Capcom 3 however, I decided to check out X-23, Wolverine's female clone. I ended up reading her Innocence Lost origin story and enjoyed it. From there, I started reading various X-Men comics and it quickly exploded into my newest hobby. My other interests/hobbies include video games, movies, music, playing sports, my dogs and weird news.
View all posts by healed1337 →
This entry was posted in comic review, comics and tagged batman, batwoman, bruce wayne, comic review, comics, dc comics, dc rebirth, detective comics, gotham city, james tynion IV, jason wright, joe bennett, kate kane, red robin, spoiler, stephanie brown, timothy drake. Bookmark the permalink.