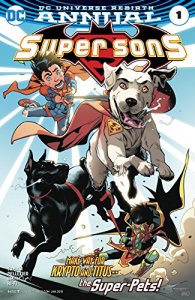 As much as this is called the Super Sons Annual, it’s not really a Super Sons comic. Sure, it opens up with Superboy and Robin stopping a bank robbery, and there’s a touch of their consistently fun dialogue, but the bulk of this comic takes place while they’re both sleeping. This is mostly a Super Pets comic. That’s not a complaint.

Written by Peter J Tomasi, the Super Sons Annual is mostly about Krypto, Bat Dog, Streaky (Supergirl’s cat) and a bunch of other superhero animals working together to solve a missing dog case. There’s not too much else to say about this one. It’s a fairly straight forward story, where most of the dialogue consists of “woof”, “drarr”, “hiss” and “moo”. As such, most of the storytelling is through the art. As a whole, this comic is adorable and fun, with a great mix of the super pets being heroes, and just being animals. Saying much more about the story or even the humour within would spoil that fun.

Paul Pelletier’s art is great. There’s a lot of detail throughout, whether it’s in the way Superboy’s cape flings around when he’s stopping the bank robbers’ getaway car, the debris flying around after they drive through a bridge wall, or the shattered glass in the window where the bank robbers are pointing their guns. The facial expressions do a great job at conveying emotions, especially for the animals. Krypto looks calm and focused when listening after Jon Kent falls asleep, and calmly opens his eyes when he decides to move. He tilts his head when he’s interested or confused, and sticks his tongue out when he briefly plays on a merry go round.  Hi-Fi’s colouring is also great. The comic is bright and colourful despite its nighttime setting, with all of the flashbacks browned out.

By the end of the opening paragraph in this review you probably already knew if this comic interested you or not, so I’ll keep this conclusion short. This is a really fun comic, and after a busy month with NaNoWriMo this year, I kind of needed a simpler, mostly mindless story like this. Even if Jon Kent and Damien Wayne aren’t in this comic all that much, the tone perfectly matches the rest of the series. If you’ve been enjoying Super Sons, or you like the idea of superhero animals working together, you’ll likely enjoy this too.

I am a relatively new comic book fan writing this blog for other new comic book fans and/or people who are interested in comics but don't know where to start. I've always been interested in writing, to the point where I have a college Creative Writing Certificate and I'm currently a year 2 Journalism student. I also have another blog where I mostly make fun of bad movies - www.healed1337.blogspot.com As for how I got into comics, I've always had a passing interest in superheroes: most notably Batman, Spider-man and the X-Men. Until February of 2011 (I think,) my only experience with any of these franchises came from the movies and video games. Shortly after I bought Marvel Vs. Capcom 3 however, I decided to check out X-23, Wolverine's female clone. I ended up reading her Innocence Lost origin story and enjoyed it. From there, I started reading various X-Men comics and it quickly exploded into my newest hobby. My other interests/hobbies include video games, movies, music, playing sports, my dogs and weird news.
View all posts by healed1337 →
This entry was posted in comic review, comics and tagged bat dog, comic review, comics, damien wayne, dc comics, dc rebirth, hi-fi, jon kent, krypto, paul pelletier, peter j tomasi, robin, streaky, super sons, superboy, supergirl. Bookmark the permalink.