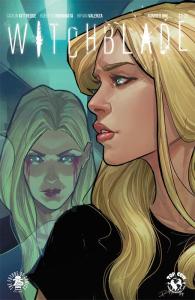 It’s been a bit more than 2 years since the original Witchblade series ended. In real world time, Sara Pezzini wielded the ancient artifact of power for 20 years. The series spawned a 2-season TV show (with a new one on the way that NBC announced in January of 2017), an anime and a number of related franchises over the years. That’s quite a bit for a comic series that was launched by Top Cow Productions, a then fairly new imprint within Image Comics.

Witchblade 1, written by Caitlin Kittredge, introduces former journalist Alex Underwood as the new wielder of the artifact of power. For the most part, the artifact’s portrayal in this comic is fairly mysterious and vague. We know that Alex came into possession of the artifact at some point in the past, that it’s been giving her disturbing visions every night, and that she has yet to fully accept it. We also know that she quit Journalism after some sort of traumatic event and is now helping witnesses and victims of various crime.

Like the earlier comics in the original series, this volume is starting off relatively down to earth, with minimal fantasy elements in favour of a look at different kinds of crime. This one is even more down to earth, with Alex’s case currently helping the abused wife of a disgraced detective. Apart from that, this comic’s main focus seems to be on Alex coming to terms with the artifact attached to her wrist. The vagueness of the comic is enough that it almost holds the story back a bit – we hardly know anything besides Alex’s struggles and her currently ongoing case. Hopefully things will be cleared up soon.

The art by Roberta Ingranata is great. The opening page of Alex lying on the ground bloodied up, with feathers floating in the air, followed by some sort of energy flowing from her eyes, is a fascinating image to get our attention with. Facial expression and body language do a great job at conveying emotion, like a tired looking Alex when she awakes in bed after her disturbing dream, the concerned look in a mysterious man’s eyes who only seems to want to help, and the suspicious look that Alex returns. There’s plenty of environmental detail, like the streets obscured by fog, while snow is covering the cars and sidewalks. And when the Witchblade unleashes energy at the end of the comic, it looks really impressive. Bryan Valenza’s colouring is also great. It’s a colourful comic despite most of it taking place at night, and there’s great use of shading and shadows to intensify the tense mood. There’s also brilliant use of blood throughout the comic to enhance the darker mood, most noticeably in a moment where Alex washes her face and blood spontaneously starts flowing with the water as part of a vision.

The interview after the comic makes it clear that this more down to earth storytelling will likely be here to stay, and that this is meant to take place in a different continuity, with the Witchblade itself working differently. As such, I’m not entirely sure how I feel about this issue quite yet, but there is potential for a good series. I’ll say this much – I like the art in this issue more than the writing, and the writing does show potential. Alex is a good enough character, and her connection to this new version of the Witchblade is interesting enough, that it’s worth sticking around for at least a few more issues. I’m not going to give this a review score because I’m not yet sure how I feel about the new series, but I will say it’s at least worth a look for fans of the original series.

I am a relatively new comic book fan writing this blog for other new comic book fans and/or people who are interested in comics but don't know where to start. I've always been interested in writing, to the point where I have a college Creative Writing Certificate and I'm currently a year 2 Journalism student. I also have another blog where I mostly make fun of bad movies - www.healed1337.blogspot.com As for how I got into comics, I've always had a passing interest in superheroes: most notably Batman, Spider-man and the X-Men. Until February of 2011 (I think,) my only experience with any of these franchises came from the movies and video games. Shortly after I bought Marvel Vs. Capcom 3 however, I decided to check out X-23, Wolverine's female clone. I ended up reading her Innocence Lost origin story and enjoyed it. From there, I started reading various X-Men comics and it quickly exploded into my newest hobby. My other interests/hobbies include video games, movies, music, playing sports, my dogs and weird news.
View all posts by healed1337 →
This entry was posted in comic review, comics and tagged alex underwood, bryan valenza, caitlin kittredge, comic review, comics, fantasy comic, fantasy comics, image comics, roberta ingranata, top cow productions, witchblade. Bookmark the permalink.