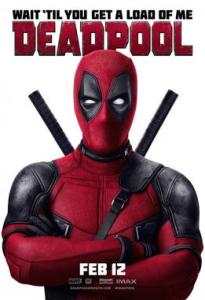 Of all the X-Men movies so far, Deadpool easily has the most complicated backstory, the same way that Tangled quite possibly has the most complicated backstory of all the Disney Animation Studios movies. I’m going to sum it up as quickly as I can. Development for Deadpool began as far back as 2004, and from the start, Ryan Reynolds was attached to the project. Writer and director David S. Goyer was attached to the project at one point as well. It was planned to be released by New Line Cinema for a time, until they realized that Fox owned all the X-Men rights, including Deadpool. Still, 20th Century Fox showed interest in the project. But first, Reynolds would join the cast of 2007’s X-Men Origins: Wolverine.

Yeah, that didn’t go over so well.

Among the many, many complaints audiences tossed at Wolverine’s first solo movie, Deadpool was one of the main ones. They turned the Merc With a Mouth into the Merc Without a Mouth and shoved physically impossible swords into his arms. The largely negative reception halted Deadpool’s production for years, and nobody pushed for the movie’s green lighting more than Reynolds himself.

Still, the studio started planning a possible Deadpool movie, to completely disregard anything from that movie that shall not be named for the rest of this blog post. Rhett Reese and Paul Wernick were hired on as writers in 2010, and Reynolds spoke with them nearly every day, praising how they understood Deadpool right away. Over the years, a number of directors were attached to the project, including Robert Rodriguez (needs no introduction) and Adam Berg (known mostly for music videos). In 2011, Tim Miller landed the director’s chair, making his feature film debut when the movie finally released. Green Lantern failing in theaters didn’t help Fox’s confidence in the project, nor did the crew’s hope for an R-rating.

After a bunch of negotiations, Fox agreed to give Reynolds and Miller a low six-figure budget to create some test footage. They created the test footage in CG, with Reynolds voicing Deadpool. That footage didn’t convince Fox either, so they started exploring ways to put Deadpool into an Avengers style movie after the massive success of Avengers. Even David Fincher and James Cameron advocating for the movie on Miller’s behalf didn’t seem to help.

Everything changed when the test footage leaked online in July of 2014, met with overwhelmingly enthusiastic responses. Convinced by the positive responses, Fox pretty much needed to cave in and greenlight the movie. They gave Deadpool an official release date of February, 2016. In case you’re curious, here’s the test footage with its original audio set with footage from the final movie. I’m also including a brief clip of Ryan Reynolds describing the long process of getting the movie made.

The whole time they kept fighting for the movie to be made, the writers would update the script every year, updating the pop culture references and fixing things here and there. They said that about 70% of the original script ended up in the final movie one way or another. I can’t help but wonder what they cut, and if it would have also been fun.

The movie would ultimately go on to become the most profitable R-rated movie of all time, earning $783 million on a $58 million budget. These days, a movie earning more than 10 times its budget is rarely heard of – even the Force Awakens didn’t achieve such a feat. And the movie deserves it, because it’s awesome.

I really don’t need to say much about the movie itself. It takes its R-rating and runs with it. Like in the comics, Deadpool breaks the fourth wall a lot in this, like directly talking to the audience, telling post production to “cue the music” and even a fourth wall within a fourth wall breaking. Why not?

Despite the movie’s overall fun tone, it gets very serious at times, and it handles these serious moments very well. Deadpool’s origin story is downright horrific, the same way that Wolverine’s should have been in that movie I won’t name again in this post. You can feel the fear and emotional pain he experiences thanks to his new ugly appearance. As much as it’s sometimes treated as a joke, you can feel his frustration on more than one occasion. It brilliantly uses flashbacks to mix these scenes into the movie to even out the tone.

Ryan Reynolds seems like he was born to play Deadpool, and you can tell that he’s really passionate about the role. He spent years trying to get the movie made, donned the costume for so many advertisements that didn’t include any actual footage of the movie, and all the PSA’s they released as well. Anyone remember 12 Days of Deadpool? For 12 days, a bunch of goodies came out, ending with a new trailer on Christmas Day. A similar campaign is already on for Deadpool 2, with a great Superman movie spoof and a Bob Ross teaser trailer.

With all that said, Deadpool won’t be for everyone. As much as my father and I tend to enjoy a lot of similar movies, I know he wouldn’t enjoy this movie’s crude sense of humour. For some people, the gore might be a bit much when the movie tends to not take itself seriously. Like I said, Deadpool’s origin story within the movie feels like its straight out of a horror movie. That too might be a bit much for some. But then again, you’re watching a movie with a hard R. What do you expect?

This is the most entertaining X-Men movie released so far, and first movie in the franchise that I don’t have any serious problems with. It feels true to the character. The tone matches the comics perfectly. There’s a great mix of action, fun and well-written drama. Even Colossus has a Russian accent like he should have, whereas he sounds American in the earlier movies. It’s about time the X-Men movies started getting everyone’s character right. And the only character they changed, Negasonic Teenage Warhead, was a very minor character in the comics who died in her first appearance. The nickname makes a lot more sense for the movie version’s powers anyway.

Every time I watch this movie, it’s just as entertaining as the first time and I usually notice something new. Even the opening credits are entertaining.

There are only two more movies left in this X-Men movie blogathon: X-Men: Apocalypse, and Logan. One of them could actually be an Oscar contender in multiple categories. The other one is Apocalypse. After this I’ll probably wait for the new year to begin another Blogathon, and I’m considering either Pixar or Star Trek for this one, followed by Star Wars with the aim to finish it around the time The Last Jedi releases on Blu-ray. But until then, Apocalypse is next.

I am a relatively new comic book fan writing this blog for other new comic book fans and/or people who are interested in comics but don't know where to start. I've always been interested in writing, to the point where I have a college Creative Writing Certificate and I'm currently a year 2 Journalism student. I also have another blog where I mostly make fun of bad movies - www.healed1337.blogspot.com As for how I got into comics, I've always had a passing interest in superheroes: most notably Batman, Spider-man and the X-Men. Until February of 2011 (I think,) my only experience with any of these franchises came from the movies and video games. Shortly after I bought Marvel Vs. Capcom 3 however, I decided to check out X-23, Wolverine's female clone. I ended up reading her Innocence Lost origin story and enjoyed it. From there, I started reading various X-Men comics and it quickly exploded into my newest hobby. My other interests/hobbies include video games, movies, music, playing sports, my dogs and weird news.
View all posts by healed1337 →
This entry was posted in comics, movies and tagged 20th century fox, adam berg, colossus, david fincher, deadpool, deadpool movie, green lantern, green lantern movie, james cameron, movies, negasonic teenage warhead, pitor rasputin, robert rodriguez, ryan reynolds, tim miller, x-men movies. Bookmark the permalink.