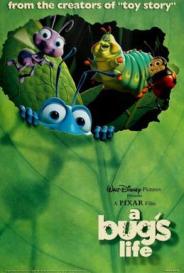 Shortly after the release of Toy Story, Pixar began working on their second feature film, A Bug’s Life. Directed by John Lasseter, the film stars Flik, a misfit ant who is both inventive and clumsy. After he severely messes up, he searches for “tough warriors” to protect his ant colony from greedy gangster grasshoppers who force the ants to harvest food for them every year. Although Flik finds help much faster than anyone anticipated, it turns out that he grabbed a bunch of circus bugs instead. And they’re failures as circus bugs.

Right away, there’s potential for a story and lessons behind them. There’s the lesson of being honest, something that Flik fails at throughout the movie. There’s the lesson of being too traditional, which Flik’s colony is. It’s that traditionalism that not only holds them back from progress, but also allows the grasshoppers to take advantage of them. It’s a coming of age story for both Flik and Princess Atta, who both learn that they’re stronger than they think, and they grow closer together by the end of the movie. And of course, there’s a great balance between embracing creativity and realizing that there are potential risks with being recklessly creative. And for the most part, the movie handles these messages well without sacrificing its story.

The film is inspired by Aesop’s fable, The Ant and the Grasshopper. In the original story, the grasshopper is lazy and ask the ants for food. When the ants refuse, it provides a lesson about the virtues of hard work and planning for the future, with quotes like “To work today is to eat tomorrow.” There’s also a counter fable that portrays the ant as a villain for refusing to help. I won’t get into that one though.

It’s a great lesson, but the movie has very little in common with the original fable from a morality standpoint. That’s not a good or bad thing – it’s just a creative way to take a classic fable and turn it into a larger story. Disney Animation Studios did the same thing with Rapunzel in Tangled – expanding the story and completely changing the moral lessons in a way that still feels respectful of the original tale. It’s also worth noting that Disney Studios made an animated short film of the fable in 1934, “The Grasshopper and the Ants”, as part of their Silly Symphony series.

Anyway, the concept for A Bug’s Life began back in 1994, a year before Toy Story’s release. The story originated during a lunchtime conversation between Lasseter, and three of the movie’s writers, Andrew Stanon, Pete Docter and Joe Ranft. They continued tossing around ideas over the next year, each contributing something to what would eventually become the story. During an early test screening of Toy Story for Disney in 1995, they pitched the idea. The idea was accepted fairly early under the working title Bugs, and they optioned it as Pixar’s second of three movies covered under the initial Pixar/Disney deal.

The casting is where this gets awkward to talk about. While Dave Foley as Flik is perfectly fine, and Julia Louis-Dreyfus as Princess Atta is great, uh … Hopper, the lead grasshopper, is voiced by Kevin Spacey. Briefly touching about Lasseter’s recent sexual misconduct allegations in my Toy Story post felt awkward enough. Spacey’s been fired from multiple rolls lately due to allegations of straight up child molestation. I didn’t know it was going to be this awkward going into my Pixar blogathon. I didn’t even know Spacey was in this movie until after I looked at the credits just now. Anyway if these allegations are true, and they appear to be, then I think Spacey is disgusting. And that’s all I have to say on that matter.

Ignoring the controversy, the cast does a great job with their respective characters. Flik sounds both intelligent and awkward when he speaks, and it fits his character perfectly. He’s got this boundless energy that’s perfectly captured in Flik’s animation as well. Princess Atta is clearly stressed out with all the new responsibilities she’s taking on. But as the movie goes on, she learns to embrace her charismatic side and even learns to relax a bit. Hopper is portrayed as a charismatic gangster with a bit of a sarcastic sense of humour, and as such he’s an entertaining villain that you still love to hate.

As much as the animators struggled with Toy Story, as it was an ambitious project that went through several re-designs during the movies’ development, A Bug’s Life was more difficult. Their computers ran sluggish due to the complexity of the character models, not to mention there are several scenes with hundreds of ants on screen at once. The first completed and rendered scene was an early circus sequence called “Flaming Wall of Death”, since it was the least likely to get changed. Two technicians also created a Lego version of the scene as a test, with a miniature video camera on Lego wheels, dubbed as the “bugcam”. They also sought further inspiration for their cinematography from Microcosmos, a French documentary about bugs.

A Bug’s Life ended up being a technical marvel. Compared to Toy Story’s flat environments and simple character designs, A Bug’s Life is more varied in characters, and the environments are more numerous and far less flat. The inside of the ant hill is complete with circular staircases, rounded out rooms and the occasional roots sticking through the ground. There are a lot of pebbles in the environment, which appear as large rocks to the ants. Although it doesn’t even remotely compare to how far CGI movies have come, this movie has aged very well. A Bug’s Life also happens to be the very first movie that was directly transferred frame by frame from its digital source to DVD, a method that’s now used in pretty much every CG animated movie.

There was also a controversy surrounding A Bug’s Life when it came out. Antz, the early Dreamworks animated movie about ants, also in 1998. This caused a bit of a feud between Pixar and Dreamworks. They argued about who came up with the idea of an animated ant movie first, with Dreamworks insisting they initially pitched their movie as far back as 1991, and Lasseter refusing to believe them. Whatever the case, the designs between A Bug’s Life and Antz are different enough, and the stories are far more different. In hindsight, and knowing how long it can take to finish an animated movie, it’s hard to call one a rip-off of the other. I’m willing to believe it was a coincidence that these two movies were both released in 1998.

In response to Pixar’s accusations, Dreamworks accused Pixar of a straight up extortion attempt because A Bug’s Life was originally scheduled for release the same week as Prince of Egypt, Dreamworks’s first traditionally animated feature film. Eventually, the release date for both A Bug’s Life and Antz would be shifted around, but it certainly didn’t help the situation. Disney’s executives concluded that Pixar should remain silent on the Dreamworks feud, although Lasseter still publically dismissed Antz as a “schlock version” of A Bug’s Life.

If I ever do a Dreamworks blogathon, which I’m considering, I’ll talk a bit more about this feud.

A Bug’s Life released in November of 1998, after Antz and before The Prince of Egypt. It ended up earning #363 million on a $120 million budget (Antz earned $171 million). It received generally favorable reviews, but not as good as Toy Story, averaging at 77% on Metacritic. I remember feeling like A Bug’s Life was for little kids (being that guy who wanted to grow up too fast at the time), but when my aunt and uncle took me out to the movie, I enjoyed it. I still enjoy it, but I wouldn’t necessarily call it anything special.

A Bug’s Life is a fun adventure movie with some great comedy, but it doesn’t have as much heart as the best Pixar movies. It’s an enjoyable watch, but it’s also the kind of movie that you can put on in the background, laugh at a couple jokes, but not feel too bad for missing most of the movie. While Toy Story is truly a movie made for all ages, A Bug’s Life is more of a kid’s movie that’s entertaining enough for adults to have a good time. While Toy Story still moves me on an emotional level, I almost forgot that I watched A Bug’s Life last night in preparation for this blog post.

If you’re a fan of animated movies, A Bug’s Life is worth watching at least once. If you enjoyed it back when it came out, you’ll probably enjoy it again. But unlike most of Pixar’s other earlier movies, A Bug’s Life isn’t worth hunting down. It’s mostly just a pleasant way to kill an hour or so. Honestly, the most memorable part of the movie is the faked blooper reel during the credits, something that Pixar did for a little while in the late 90’s/early 2000’s.

Next up is Toy Story 2, followed by Monsters, Inc. and Finding Nemo. The next four movies are all fantastic in their own way, followed by Pixar’s first ever mediocre movie. But before that, I’m going to be watching the greatest Fantastic Four movie ever made, and it’s not even officially the Fantastic Four.

I am a relatively new comic book fan writing this blog for other new comic book fans and/or people who are interested in comics but don't know where to start. I've always been interested in writing, to the point where I have a college Creative Writing Certificate and I'm currently a year 2 Journalism student. I also have another blog where I mostly make fun of bad movies - www.healed1337.blogspot.com As for how I got into comics, I've always had a passing interest in superheroes: most notably Batman, Spider-man and the X-Men. Until February of 2011 (I think,) my only experience with any of these franchises came from the movies and video games. Shortly after I bought Marvel Vs. Capcom 3 however, I decided to check out X-23, Wolverine's female clone. I ended up reading her Innocence Lost origin story and enjoyed it. From there, I started reading various X-Men comics and it quickly exploded into my newest hobby. My other interests/hobbies include video games, movies, music, playing sports, my dogs and weird news.
View all posts by healed1337 →
This entry was posted in movie review, movies and tagged aesop, andrew stanon, animated movies, animation, ants, antz, cgi, dave foley, disney, dreamworks, hopper, joe ranft, john lasseter, julia louise-dreyfus, kevin spacey, movies, pete docter, pixar, pixar movies, princess atta, the ant and the grasshopper. Bookmark the permalink.