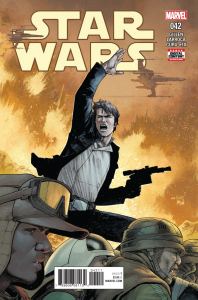 The rebels are currently on Jedha, the planet from Rogue One with sizeable kyber crystal deposits and rebel extremists. The planet that the Death Star blasted a giant hole into. Why? Because the Empire is back, hoping to take all of the planet’s remaining crystals before it becomes completely uninhabitable. The rebels aim to stop them.

Written by Kieron Gillen, Star Wars 42 feels like the penultimate issue in a story arc that’s touched on multiple story points at once. And it all fits together quite ingeniously. The previous two issues expanded on Luke’s journey to become a Jedi, ending in a valuable lesson. The story as a whole begins the build-up towards The Empire Strikes Back, while also showing us what’s left of Jedha and Saw Gererra’s extremist group. And of course it brings in a character from Gillen’s Darth Vader run, the queen of a very dangerous mining planet, to take care of the mining operation.

This issue focuses mainly on building up to the battle in the next issue, and the build-up is exciting. The giant mining platform is very well armoured, making it nearly impossible to blow up with the rebel’s resources. So they need to rely on a direct invasion instead – one that the Empire is expecting. Han Solo starts to show some of his leadership potential in this issue, providing the rebels with a much better plan than what they came up with. Luke Skywalker and Leia each work on their own stealth mission, and they each find a worthy opponent to fight in the next issue. Everything moves quickly, but not so much that it feels rushed. There’s also room for a nice character moment between Han and Chewie, which helps Han realize that his leadership is needed.

The art by Salvador Larroca is mostly great. The environmental detail is always impressive, whether it’s in the rebels’ heavily damaged base, the hostile environment surrounding the large mining platform, or the falcon’s interior complete with all of its loose wires, pipes and metallic walls. Facial detail is also impressive, although sometimes they look a bit too much like characters’ movie counterparts for the general art style. And although they’re usually great, sometimes the facial expressions look a bit off, like a bizarre lip movement Han gives in the middle of a gun fight, and the queen looking slightly bored when she confronts Leia. Apart from that, the art is excellent. Guru-eFX’s colouring is also great. The colours are always shaded a bit to match the environments, like the blue glow from the hologram in the rebel base. The interior of the falcon is generally greyed out, which is appropriate. As a whole, this comic is colourful and there’s a good balance between light and dark environments.

This is a great comic with tight writing and mostly brilliant art that’s only held back by a handful of strange facial expressions. Han gets a moment to shine that feels like it’s long overdue. Both sides of the conflict show intelligence in their planning and execution. It makes for an exciting story as a whole, and it’s hard not to look forward to the next issue. If you’re a Star Wars fan who reads comics, you should check this series out.

I am a relatively new comic book fan writing this blog for other new comic book fans and/or people who are interested in comics but don't know where to start. I've always been interested in writing, to the point where I have a college Creative Writing Certificate and I'm currently a year 2 Journalism student. I also have another blog where I mostly make fun of bad movies - www.healed1337.blogspot.com As for how I got into comics, I've always had a passing interest in superheroes: most notably Batman, Spider-man and the X-Men. Until February of 2011 (I think,) my only experience with any of these franchises came from the movies and video games. Shortly after I bought Marvel Vs. Capcom 3 however, I decided to check out X-23, Wolverine's female clone. I ended up reading her Innocence Lost origin story and enjoyed it. From there, I started reading various X-Men comics and it quickly exploded into my newest hobby. My other interests/hobbies include video games, movies, music, playing sports, my dogs and weird news.
View all posts by healed1337 →
This entry was posted in comic review, comics and tagged chewbacca, comic review, comics, guru-efx, han solo, jedha, kieron gillen, luke skywalker, marvel comics, princess leia, rogue one, salvador larroca, saw gererra, star wars, star wars comics, the empire strikes back. Bookmark the permalink.