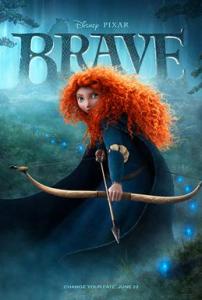 Brave is yet another movie of many firsts for Pixar, although not all of them are just for Pixar. It’s the first and only movie to star an official Disney Princess not released by Disney Animation Studios. It’s the first Pixar movie to be directed by a woman. It’s also the first movie with a woman director to win the Academy Award for Best Animated Feature. We’ll get into the latter two more later.

Brave, released in 2012, takes place in Scotland before the British Empire took over. It takes place in a time when the highland clans are still ruling the land. It’s intended as a fairy tale inspired by Hans Christian Anderson and the Brothers Grimm, but it is an original story. The movie isn’t entirely clear as to when it happened, and of course there are historical inconsistencies that make it impossible to pin down. There are bears, which have been extinct in Scotland since prehistoric times. Meridia’s tight dress she wears at one point is distinctly Renaissance era inspired. And of course it features The Highland Games, which didn’t exist until the 19th century – well after Scotland no longer had a royal family in 1707. But it’s a fairy tale, so I’ll let that slide.

Director Brenda Chapman’s started working on the idea for the movie in 2006, partly inspired by a family trip to Scotland, and partly inspired by her relationship with her daughter. Chapman’s previous Disney credits include being a story artist for The Little Mermaid, The Rescuers Down Under and story credits for Beauty and the Beast and The Lion King. She made her directorial debut with The Prince of Egypt (the first traditionally animated Dreamworks movie), but although she worked on several movies since, Brave is the second movie she’s ever directed. The other main director, Mark Andrews, has a fairly extensive and varied background with credits on everything from the lame Quest for Camelot movie (storyboard artist) to the generally respected  Spider-Man from 2002.

There isn’t too much information on Brave’s development with a quick google search. Most of the animation focus was on teaching Pixar’s animators about the weapons in the movie, like how bows and arrows work and the types of swords common in the Highlands. They also used Photoshop to create around 350 custom brushes to help with the lush and textured look of the Highland landscapes, making each environment look a bit different than the last. And although the original plan involved 80% of the movie taking place in the snow, very few snow scenes remained in the final movie.

Brave is also the first feature-length film to use the Dolby Atmos sound format, a sound format that simulates 3D sound, and it’s still not all that common.

Brave released to mostly positive reviews. Roger Ebert said “the good news is that the kids will probably love it, and the bad news is that parents will be disappointed if they’re hoping for another Pixar groundbreaker.” He praised the movie for its positive message about improving communication between mothers and daughters. Some critics weren’t as positive, but the movie ended up earning 79% on Rotten Tomatoes with an average score of 7/10. It also earned $540 million on a $185 million budget. And it did win the Academy Award for Best Animated Feature. It’s worth noting that of the 5 nominees that year, three of them were released by Disney.

As for my own thoughts on the movie, I think it’s ok. I would agree with Ebert that the movie’s core message is a great one. But as much as I want to love this movie as someone who really enjoyed his trip to Scotland a few years ago, I just can’t. It’s not that Meridia, the Scottish Princess isn’t a likeable character. She’s fun when she’s enjoying herself, her motivations are very clear, and despite how she makes a huge mistake and takes too long to own up to it, you can understand her frustration.

The core story is that Meridia loves exploring the wilderness, and she also enjoys archery and other physically active hobbies. She’s an adventurer at heart, but her mother wants her to settle down and get ready to marry someone from another Scottish clan. Meridia’s father is much looser with Meridia and their personalities are fairly similar, but there is still clearly love in the family. The conflict between Meridia and her mother leads to an intense argument, and then Meridia finds a witch who gives her a spell to “change her fate”. This spell turns Meridia’s mother into a bear, and the rest of the movie is the two of them reconnecting while trying to solve their problems.

The story is decent enough, and the movie does have some great humour and action. The problem is that this movie has way too much complaining, arguing and people not willing to admit their own faults. At times it gets annoying. The humour, like the complaining, also gets in the way of the drama. After a while you might find yourself tuning out – I know I did when I watched it last night. You could easily retitle this movie “Rich People Problems: The Movie”.

It’s a shame, because Brave could have been brilliant. By toning down the humour and complaining a bit, and focusing on Meridia reconnecting with her mother, this could have been a much stronger film. There’s a great movie hiding in there somewhere. But instead, it’s just ok. I’m really not sure what else to say about this one. Between re-watching Cars and seeing Cars 2 for the first time, I would actually call Brave my least favourite Pixar movie. Not because it’s bad, but because it’s ultimately forgettable. It’s a one and done kind of movie that you may enjoy the first time, but it’s not worth watching again. And yet I’ve now seen this movie three times. Each time, I tuned out more than the last. It does have a nice song at the end that I found myself playing in my head during my last shift though.

Anyway, next up is Monsters University, followed by Inside Out. After that, I’m only looking at Pixar movies that I’ve never seen before, starting with The Good Dinosaur. It’s worth noting that The Good Dinosaur is Pixar’s lowest grossing film, despite releasing a full 20 years after Toy Story. I’ve heard decent things about it, but it still didn’t make that much of a profit compared to its budget.

I am a relatively new comic book fan writing this blog for other new comic book fans and/or people who are interested in comics but don't know where to start. I've always been interested in writing, to the point where I have a college Creative Writing Certificate and I'm currently a year 2 Journalism student. I also have another blog where I mostly make fun of bad movies - www.healed1337.blogspot.com As for how I got into comics, I've always had a passing interest in superheroes: most notably Batman, Spider-man and the X-Men. Until February of 2011 (I think,) my only experience with any of these franchises came from the movies and video games. Shortly after I bought Marvel Vs. Capcom 3 however, I decided to check out X-23, Wolverine's female clone. I ended up reading her Innocence Lost origin story and enjoyed it. From there, I started reading various X-Men comics and it quickly exploded into my newest hobby. My other interests/hobbies include video games, movies, music, playing sports, my dogs and weird news.
View all posts by healed1337 →
This entry was posted in movie review, movies and tagged academy award, animated, animated movies, animation, bears, brave, brenda chapman, cgi, disney, disney princess, fairy tale, highland games, highlands, king of scots, mark andrews, meridia, movies, pixar, pixar movies, princess meridia, roger ebert, rotten tomatoes, scotland, scottish. Bookmark the permalink.