Pixar Movies 15 – Inside Out 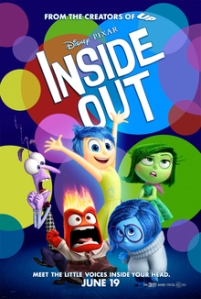 The last few Pixar movies I’ve looked at could all be grouped into Pixar’s own Dark Age of sorts, similar to Disney Animation Studio’s own Dark Age. By no means were any of these movies bad (well, except maybe Cars 2), and they all made money, but none of them did nearly as well critically or commercially as anything in Pixar’s past. These three movies also came after Pixar won the Academy Award for Best Animated Feature four times in a row, and even earned two nominations for Best Picture in a row. Of the three movies I’ve looked at most recently, I’d say Monsters University is the best. Perhaps not in my taste, but I get why people like it. It’s also true that between Cars (2006) and Monsters University (2013), Pixar released a movie every single year. Monsters University also released the same year as Disney’s Frozen, which regardless of how you feel about it, is a monster hit that just won’t go away.

Perhaps Pixar needed a year off without a new release, and that’s what they did after Monsters University. Pete Docter, the director behind Inside Out, previously directed Up. Up’s smashing success convinced Pixar to give Docter a more sophisticated story. The story of Inside Out was inspired by several moments in his life. As a child, he moved with his family to Denmark when his father wanted to study the music of Carl Nielson. While his sisters had an easy time adjusting, Docter felt his peers constantly judged him. They were interested in sports, while he preferred to sit alone and draw, a hobby that eventually led him to animation.

In late 2009, he noticed similar shy habits building in his pre-teen daughter. “She started getting more quiet and reserved, and that, frankly, triggered a lot of my own insecurities and fears.” He imagined what happens in the human mind when emotions set in, and that inspired him to explore that through animation. He researched information about the mind. He, along with his producer and his co-director, consulted Paul Ekman, a well-known psychologist who specialized in emotions. Ekman identified six core emotions early in his career: anger, fear, sadness, disgust, joy and surprise. Docter ended up combining fear and surprise into one, thinking they were a bit too similar for the sake of a movie.

It’s worth noting that Inside Out is the first Pixar movie without any input from Apple CEO Steve Jobs, who died in 2011. It also had little input from John Lasseter, who was focusing on restructuring Disney Animation Studios at the time.

The story originally focused on Joy and Fear traveling through Riley’s mind together. They worked on that version of the story for several years, even preparing a test screening. Although by 2012, when the project was set for an evaluation screening with other Pixar filmmakers, Docter felt the story wasn’t working. He took a long walk one Sunday, where he even worried that he’d be fired if the movie didn’t work out. He reflected on what he’d miss the most about working at Pixar, and that led to a breakthrough. He replaced fear with sadness, and when he explained the change to everyone else, they all thought it was brilliant. He described telling his superiors of the change as a scary moment, but the film remained in production, allowing him to move forward with the major change.

There isn’t too much new animation from a technical standpoint, but it was a very impressive production anyway. The real focus from the animation standpoint was how to build Riley’s mind in a compelling way. They thought of turning her mind into a large industrial building at one point. They considered a computer network style appearance. They eventually landed on a set of islands, each representing a different side of Riley’s personality, with so much vast space that you couldn’t see the end of it. The art design intentionally reflects a 1950’s Broadway musical.

They worked to push each core emotion’s personality in both their design and their movements, leading to multiple redesigns and a lot of experimentation. At one point they considered removing the sparkles from Joy’s visual makeup after eight months of work, but then Lasseter requested that they applied the sparkles to all the emotions. “You could hear the core technical staff just hitting the ground, the budget falling through the roof,” recalled production designer Ralph Eggleston.

Michael Giacchino composed the film’s score, making it his fifth collaboration with Pixar and his second with Docter. Docter having a background in music himself, spoke a lot with Giacchino about the story and characters. Giacchino even built an eight minute suite of music unconnected to the film, based on his emotions viewing it.

Even though the concept of the movie would be difficult to market, it earned $867 million worldwide on a budget of $175 million. It opened second only behind Jurassic World (in its second week). Despite this being Pixar’s first ever movie to not release at number one, it still broke their record for best opening weekend for an original film, and it was only behind Toy Story 3 at the time for all their openings. As of this writing it holds the record for most money earned on opening weekend by a movie that didn’t open at number one. It even beat Avatar’s opening record for best opening weekend by a movie not based on any previously existing material (which has since been broken, but that’s still very impressive).

Inside Out was also very successful with critics, earning a 98% on Rotten Tomatoes with an average score of 8.9/10. Critics across the board praised Inside Out for its inventive animation and its powerfully moving story. They hailed it as a return to form for Pixar. The movie earned 15 Best Picture, 21 Best Original Screenplay and 40 Best Animated Feature nominations across 50 different organizations. Among its multiple Best Animated Feature wins, it earned an Academy Award, a Golden Globe, an Annie Award (it won 10 different Annie Awards in total), a BAFTA award, and a number of local awards. It even earned the Best Film award from the Dublin Film Critics’ Circle, the largest film award group in Ireland from what my quick research could tell.

I have to agree with the critics on this one. Inside Out is a work of genius. It’s kind of hard to describe this movie in two paragraphs, but I’ll do my best. The story revolves around 11-year-old Riley Anderson, who moves from her small town of origin in Michigan to San Francisco after her father gets a new job. The movie goes back and forth between the outside world and her mind, where her five core emotions run the show. While Joy’s always run Riley in the past, she finds herself losing control and doesn’t know why. Sadness seems to be not only taking over more than she has in the past, but is even affecting old, happy memories just by touching them. It leads to a conflict between Sadness and Joy, and they eventually get sucked out of their control center. The rest of the movie is a journey in Riley’s mind, looking at places like abstract thought, long-term memory and even a prison where Riley’s deepest fears are kept locked up.

It’s a journey where Joy learns the value of sadness, and how it can strengthen relationships. It’s a journey where all five emotions learn about growing up. It’s a journey where the core emotions learn that a memory can be nuanced instead of being only happy or sad. Like Pixar’s best movies, there are several moments where you’ll likely find yourself tearing up. All of this creative storytelling is helped by the brilliant vocal cast, like Amy Poehler as Joy, Phyllis Smith as Sadness, Lewis Black as Anger, and of course Frank Oz as one of the subconscious guards.

Inside Out is not only a very creative movie. It’s an emotional story that takes something that most people experience at some point in their lives and turns it into an epic journey. The well-researched writing and the creative animation works hand in hand seamlessly. The humour is great, especially at the end of the movie when you start seeing inside the heads of other characters. It’s both compelling and hilarious seeing how their minds work differently. But best of all, this movie will make you think. It’s a genuine work of art that also works as a piece of entertainment, and that’s no easy accomplishment.

Docter has talked about the possibility of a sequel, but that Pixar is focusing on original material for the time being. And seeing how not only have 5 of their last 9 movies been sequels, but their next two movies are also sequels (and the same could be said of Disney Animation Studios now that Gigantic has been cancelled), that’s probably for the best. He also talked about how in order to make a sequel to Inside Out, they’d need to make it worth it – they can’t just make a sequel because they want to. I fully agree here, because Inside Out deserves any potential sequel to be something special.

Also worth watching is the short on the Blu-Ray, Riley’s First Date. That short is just hilarious.

For the rest of this Blogathon, I’ll be watching movies I haven’t seen before, starting with The Good Dinosaur. After that, it’s Finding Dory, Cars 3 and then Coco. The Incredibles 2 releases this June, and then Toy Story 4 is slated for a 2019 release. But until they come out, we’ll be done with Coco. Coco will likely be delayed a bit though, partly because it’s coming out on Blu-Ray at the end of the month. So I’ll probably take a break between seeing Cars 3 and looking at Coco, or maybe I’ll start my Star Wars movie blogathon between that. We’ll see when we get to that point.

I am a relatively new comic book fan writing this blog for other new comic book fans and/or people who are interested in comics but don't know where to start. I've always been interested in writing, to the point where I have a college Creative Writing Certificate and I'm currently a year 2 Journalism student. I also have another blog where I mostly make fun of bad movies - www.healed1337.blogspot.com As for how I got into comics, I've always had a passing interest in superheroes: most notably Batman, Spider-man and the X-Men. Until February of 2011 (I think,) my only experience with any of these franchises came from the movies and video games. Shortly after I bought Marvel Vs. Capcom 3 however, I decided to check out X-23, Wolverine's female clone. I ended up reading her Innocence Lost origin story and enjoyed it. From there, I started reading various X-Men comics and it quickly exploded into my newest hobby. My other interests/hobbies include video games, movies, music, playing sports, my dogs and weird news.
View all posts by healed1337 →
This entry was posted in movie review, movies and tagged academy award, amy poehler, anger, animated, animated movies, animation, bafta, cgi, disgust, disney, fear, frank oz, golden globe, inside out, john lasseter, joy, lewis black, michael giacchino, michigan, movies, paul ekman, pete docter, phyllis smith, pixar, pixar movies, ralph eggleston, riley anderson, riley's first date, rotten tomatoes, sadness, san francisco. Bookmark the permalink.

4 Responses to Pixar Movies 15 – Inside Out