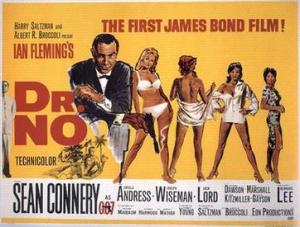 James Bond is a rather unique series within the movie industry. With 24 entries in the main series and two unofficial entries, no other film franchise has come close to this number of movies. Although the Marvel Cinematic Universe is catching up pretty quick, already at 19 released movies in 10 years. Although it’s since been overtaken by Harry Potter, Star Wars and the Marvel Cinematic Universe, it has at times been the most financially successful movie franchise of all-time. The franchise has also been around in movie form since 1962 – it’s fast approaching its 60th anniversary as a film franchise. Yet they’re still making movies.

With that kind of legacy and lasting popularity, there must be something special about it.

Dr. No, the first entry in the James Bond film franchise, released on October 5th, 1962. Directed by Terence Young, the movie was produced on a low budget of $1.1 million, yet earned $6 million in its initial theatrical run, making it a huge success. It eventually earned a total of $59 million after several re-releases, one as a double feature with its first sequel, From Russia With Love.

While the movie received mixed critical reception at the time, it features a number of iconic moments that still influence the franchise today. For example, there’s the famous scene of Ursula Andress, portraying the movie’s main Bond girl Honey Ryder, emerging from the water in a bikini. In 2003, that scene was ranked on Channel 4’s list of the 100 sexiest scenes in film history. The bikini she wore sold at a 2001 auction for more than $61,000. In addition, the movie firmly established the iconic James Bond theme music, introduced the SPECTRE criminal organization, the vodka martini shaken not stirred, and a number of tropes that have shown themselves in nearly every Bond movie since.

The backstory behind the film is a touch confusing, so let’s just sum it up. The book franchise, written by Ian Fleming, began in 1963. Before writing the series, Fleming acted as a Naval Intelligence Officer for the British forces. As an intelligence officer, he often worked with a group often referred to as the Ministry of Ungentlemanly Warfare. Yes, the same group that the late actor Christopher Lee was also involved in. Many of their operations still remain classified. In addition to his other written works, Fleming released 14 James Bond books before his death in 1964, 12 novels and 2 short story collections.

Fun fact, Ian Fleming and Christopher Lee were cousins-in-law. Also, Christopher Lee was considered for the role of Dr. No, and would eventually play the main villain in Man With The Golden Gun in 1974.

Co-producer Harry Saltzman gained movie rights for the novel, but didn’t want to go through with the project at first. Albert R. Broccoli wanted the rights and tried to buy them from Saltzman, who refused to sell. Instead, they formed a partnership to make the films. A number of Hollywood studios didn’t want to take on the project, calling them “too British” or “too blatantly sexual”. Eventually, United Artists accepted their film proposal, and production for Dr. No began shortly after. At first they wanted to start with Thunderball, but there was a legal dispute between the screenplay’s co-author, Kevin McClory and Fleming. Instead, they chose Dr. No.

Four people turned down the directing duties before Terence Young accepted. Young chose most of the stylistic choices that have influenced the franchise to this day, including the addition of humour, while also reducing the sexual elements from the books, worried that they might not get past the censors. At first United Artists would only give the movie exactly $1 million of budget, but the UK branch gave them an extra $100,000 for the climax. Because of such a tight budget, the movie only had one sound editor, backgrounds made of cardboard paintings and a door covered in leather-like plastic. They built sets as cheaply as possible. It’s incredible how good some of the larger sets look with that kind of budget.

The search for James Bond’s actor was extensive in its own right. They originally sought Cary Grant, but he would only agree for one movie. They wanted someone who would be willing to be a part of a franchise. They looked to Richard Johnson, but he turned it down because he just started a contract with MGM. Another potential actor, David Niven, would eventually play the character in the 1967 parody, Casino Royale, which we’ll get to at some point in this Bond blog series.

They even held a contest to see who could play the character, with six finalists chosen and screen tested by the producers and Fleming himself. The winner was then 28-year-old Peter Anthony, who apparently had a Gregory Peck quality. But he couldn’t cope with the role. They also considered Roger Moore, but thought him as too young and pretty. He would eventually become the third James Bond actor.

Finally, they landed a five film contract with Sean Connery. Because Connery was Scottish, there was actually a bit of controversy with this choice at the time. This movie alone proved that controversy wrong. There are other stories worth looking into with casting the other characters, but this background information section has gone on long enough.

I’ll get into it deeper later on, but my introduction to the James Bond franchise kind of came in three steps. My earliest true introduction was playing multiplayer Goldeneye on the Nintendo 64 way back in the mid to late 90’s. My second step was seeing parts of this very movie on TV. I didn’t see the start or the finish, but I saw enough to know I was interested. Yet I didn’t see this full movie until years later, when I bought two DVD packs that, together, included all of the Sean Connery Bond movies.

My reaction to seeing Dr. No in full for the first time was that I enjoyed it, but it also shows its low budget. The action is fairly small scale, all of the car chases heavily use tight angles and obvious green screen effects. Sometimes the picture in the background doesn’t even mesh well with the action. You’ll get Bond being chased by would be assassins. When you see Bond’s face and the inserted background picture, the car in pursuit looks very close, yet it doesn’t quite hit when there’s a bashing sound. In the long shots, Bond is way ahead. That’s just one example.

It’s also hilarious how in hindsight, Bond “saves the day” by pretty much causing a nuclear meltdown on a Jamaican island. Yeah …

The story is also quite vaguely told, with Dr. No’s plan not clearly stated at any point. Sure, he plans on disrupting some sort of rocket launch, but the reasons behind it aren’t explained at all. What does he have to gain from this? How does this benefit SPECTER? But despite this movie’s many flaws, it’s still fun to watch. It’s hard not to enjoy the charm that Sean Connery puts into the role. He’s clearly having fun with it, and so is the rest of the cast.

But on the plus side, Connery’s charm is undeniable. Some of his actions are also brilliant, like how paranoid he is in his hotel room, covering every possible angle to make sure nobody invades while he’s not there. He quickly picks up on the fact that something’s not right even as he arrives in Jamaica. And it’s fun to see him outwit his would-be assassins. And as vague as Dr. No’s plans are, he’s still a compelling villain.

And here is the fun part of this blog post. The Bond counters. We’ll keep a running tally of the kills as this blog series goes along.

Next up is From Russia With Love, which also establishes a number of Bond movie traits that continue to this day. I’m planning on doing all of the Sean Connery movies this month, which constitutes of 6 movies. Then we’ll likely look at all of the movies, both official and not, that star an actor that portrayed Bond no more than two times. Then we’ll move on to Roger Moore. But before that, I’ll start my Dreamworks Blogathon. I’ll likely go back and forth between these two blogathons for a while.

I am a relatively new comic book fan writing this blog for other new comic book fans and/or people who are interested in comics but don't know where to start. I've always been interested in writing, to the point where I have a college Creative Writing Certificate and I'm currently a year 2 Journalism student. I also have another blog where I mostly make fun of bad movies - www.healed1337.blogspot.com As for how I got into comics, I've always had a passing interest in superheroes: most notably Batman, Spider-man and the X-Men. Until February of 2011 (I think,) my only experience with any of these franchises came from the movies and video games. Shortly after I bought Marvel Vs. Capcom 3 however, I decided to check out X-23, Wolverine's female clone. I ended up reading her Innocence Lost origin story and enjoyed it. From there, I started reading various X-Men comics and it quickly exploded into my newest hobby. My other interests/hobbies include video games, movies, music, playing sports, my dogs and weird news.
View all posts by healed1337 →
This entry was posted in Uncategorized and tagged 007, 007 dr. no, 007 specter, albert r. broccoli, dr. no, harry saltzman, honey ryder, ian fleming, jamaica, james bond, james bond movies, james bond specter, kevin mcclory, mi6, movies, sean connery, specter, spy movie, terence young, united artists, ursula andress. Bookmark the permalink.