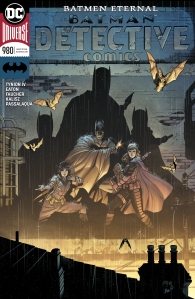 This month has been really weird so far. Despite not dropping anything, nor any of the titles I’m reading being cancelled quite yet, I only picked up 3 comics last week. And one of them was a spontaneous pickup after only two appeared on my pull list. This week, I picked up only one. Normally it’s the later weeks in a month where that happens. So I don’t know what’s happening anymore. In any case, I might as well just go for a full review.

Anyway, Detective Comics 980 feels like the penultimate issue in a story arc where Batman’s team, already fractured, is facing its most dangerous enemy yet. With the influence of a rogue programmer from the Colony, Tim Drake’s eye program has rebuilt the Belfry tower, pretty much turned Tim Drake into his future Terminator self, and is heading out to pretty much turn Gotham City into a total police state. And a very high tech one at that. Those that remain of Batman’s team are split up and venerable. In the last issue, Batman resorted to the only play he had left. He asked for Stephanie Brown’s help. For context’s sake, Stephanie left the team a while ago over Tim Drake’s apparent death, and stayed away over ideological differences.

This issue, written by James Tynion IV, picks up where the last left off. The Eye is working to convert many influential figures to his cause, creating a technological hive mind of sorts. He’s going after the police, along with a future commissioner, and he’s already taken Azrael and Batwing. That’s when Batman and his remaining allies hatch their last ditch plan to shut down The Eye before it’s too late. Batwoman uses herself as bait, having Tim chase her around the city with the intent to kill. Meanwhile, Spoiler helps Batman and Orphan sneak into the Belfry tower to shut it down from within. Both groups are attacked both physically and emotionally. It’s intense both in terms of action and drama, and that’s what really makes this issue work so well. I won’t spoil the ending, but until pretty much the last couple of pages, it looks pretty hopeless. And then this comic suddenly gets glorious.

The art by Scott Eaton is great. There’s a lot of detail in everything, from the shattering glass on the opening page as Tim’s Eye drones smash into the police station, to the core of the Eye’s computers complete with floating holograms showing its logo. The action flows well from panel to panel, especially as Batwoman is running from Tim Drake and his drones. Although most characters are covered in masks, there’s great use of facial expression as well. Especially towards the end when Stephanie Brown shows a wide range of emotions in only a couple of pages, from a shocked look, to a touch of despair, and then a look of gleeful confidence. John Kalisz and Allen Passalaqua’s also do a great job with colouring. There’s brilliant use of lighting and shadows throughout, and despite being an overall dark comic, there’s plenty of colour variety and great use of contrast.

If this is the only comic I picked up this week, then I’m glad it’s an awesome one. The situation is very intense, both in action and drama. Even though Spoiler and Batman are working together again, there’s still tension between them. And despite the extremes that Tim Drake has been pushed to through his hacked Eye software, there are still traces of his young, more optimistic self. There’s more I could talk about, but I don’t want to risk spoiling the fun. This is a Batman team book, and it’s been great from the start overall. If that interests you even remotely, you should be reading this.

I am a relatively new comic book fan writing this blog for other new comic book fans and/or people who are interested in comics but don't know where to start. I've always been interested in writing, to the point where I have a college Creative Writing Certificate and I'm currently a year 2 Journalism student. I also have another blog where I mostly make fun of bad movies - www.healed1337.blogspot.com As for how I got into comics, I've always had a passing interest in superheroes: most notably Batman, Spider-man and the X-Men. Until February of 2011 (I think,) my only experience with any of these franchises came from the movies and video games. Shortly after I bought Marvel Vs. Capcom 3 however, I decided to check out X-23, Wolverine's female clone. I ended up reading her Innocence Lost origin story and enjoyed it. From there, I started reading various X-Men comics and it quickly exploded into my newest hobby. My other interests/hobbies include video games, movies, music, playing sports, my dogs and weird news.
View all posts by healed1337 →
This entry was posted in comic review, comics and tagged allen passalaqua, batman, batwoman, bruce wayne, cassandra cain, comic review, comics, dc comics, dc rebirth, dc universe, detective comics, james tynion IV, john kalisz, kate kane, orphan, red robin, scott eaton, spoiler, stephanie brown, the colony, tim drake. Bookmark the permalink.