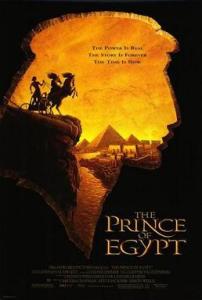 Only a couple months after DreamWorks released their first ever animated movie, Antz, they released what was originally intended to be their first movie. The Prince of Egypt, an animated musical retelling of the biblical book of Exodus, released in December of 1998. Just a note, I’m going to assume that you’re fairly familiar with the story of Moses going into this blog post.

As with Antz, the backstory for this movie begins at DreamWorks’ biggest rival, Disney. DreamWorks co-founder and former Disney producer, Jeffrey Katzenberg, pitched an animated retelling of The Ten Commandments on many occasions. You could go so far to say that this was a passion project of his. But every time, then Disney CEO Michael Eisner refused. Shortly after founding DreamWorks in 1994, Katzenberg mentioned his desire to retell the story of Moses to fellow co-founder Steven Spielberg. Spielberg’s response – “You ought to do The Ten Commandments”.

The story went into writing and pre-production at the same time. They started with a story outline, and hired a team of fourteen storyboard artists and writers to work on the movie together, sequence by sequence. Once the storyboards were approved, they started digitally editing them to create a “story reel”. This allowed the full filmmaking team to watch the full movie in continuity before full production began. It’s a unique method of developing a story that no doubt helped enhanced the movie’s visual storytelling.

The team also hired biblical scholars, both Christian and Jewish, to help the film be more accurate and faithful to the original story. After previewing the developing film, the studio executives praised the filmmakers for reaching out to these outside sources.

The movie’s artistic design is partially based on Egyptian hieroglyphics, but also aimed to make the animation more realistic than most animated movies at the time. Both the character design and art direction worked hard to create a clear distinction between the symmetrical, angular look of the Egyptians vs the more organic, natural looking Hebrews and their environments. More than 900 hand-painted backgrounds were created for the film. It’s also worth noting that 350 artists from 34 different nations worked on the movie. The art team was primarily recruited from either Disney Animation Studios defectors or Amblimation, Steven Spielberg’s short-lived animation studio that I mentioned in my Antz post. As with a lot of Disney movies at the time, several major moments in The Prince of Egypt, most notably the 10 plagues and the crossing of the red sea, blended traditional animation with CGI.

Another major focus on the production was figuring out the right voice for God. In many previous movies featuring God, including The Ten Commandments, they always gave God a booming, powerful voice. Instead, they went for a softer, more soothing voice. They imagined God’s voice as the kind of voice we hear in our heads in our everyday lives. To add to this effect, Moses’s voice actor, Val Kilmer, provided the voice of God as well. Interestingly enough in The Ten Commandments, Charlton Heston portrayed both Moses and God as well.

Because this is a musical, it’s definitely worth talking about the music. Composer and lyricist Steven Schwartz began working on the movie’s songs from the beginning of production. As the story evolved, he continued writing songs that would both entertain and help move the story forward. Composer Hans Zimmer would later come in to arrange and produce the songs, as well as composing the film’s score. Three different soundtrack albums were released simultaneously, each aiming towards different audiences. One focused on a country-themed soundtrack, and another straight gospel, functioned as film tributes. The official soundtrack on the other hand contained the movie’s actual songs and score.

The movie released in second place behind the Tom Hanks “You’ve Got Mail” romantic comedy, but still earned a decent $14.5 million. It actually gained %4 in its second weekend, and ended up earning a total of $218 million worldwide. It became the second non-Disney animated feature in history to earn over $100 million domestically, after Paramount/Nickelodeon’s The Rugrats Movie. Worldwide, it remained the top-grossing non-Disney animated movie until 2000’s Chicken Run (also DreamWorks) surpassed it. It also remained the top grossing traditionally animated non-Disney movie until 2007, when The Simpsons Movie became the highest earning traditionally animated movie of all-time. If you remember my Disney Animated Movies Blogathon from last year, you’ll know that The Lion King remains dominant in first position. Regardless, that’s a very good performance for DreamWorks’ second movie, and a Christian inspired one at that.

The movie also did generally well with critics, earning a 79% on Rotten Tomatoes with an average score of 7/10. Roger Ebert gave the movie high praise, saying it’s “one of the best-looking animated films ever made … This is a film that shows animation growing up and embracing more complex themes, instead of chaining itself in the category of children’s entertainment.” The Prince of Egypt also earned the Academy Award for Best Original Song, for “When You Believe”.

As for my own thoughts, I’ve always loved this movie. Not just because as a Christian, I often find it frustrating that there are very few good Christian movies. But because I find this to be a very well-crafted story. The movie’s soundtrack and numbers give this movie an epic feel, thanks to the mix of choirs, lead singers belting the emotional moments, and of course Zimmer’s epic score. The visuals find a perfect blend between artistic license and a look that reminds you of ancient Egypt.

The vocal cast is phenomenal all-round. You’ve got the previously mentioned Val Kilmer playing Moses, who gives a well-varied and emotional performance. Ralph Fiennes (a Shakespeare interpreter and the current actor for M in the James Bond series) as Rameses, and he plays a cold-hearted pharaoh very well. Michelle Pfeiffer as Moses’s wife, Sandra Bullock as Moses’s biological sister Miriam, and Jeff Goldblum as Moses’s biological brother Aaron. All of which put in nuanced performances within the screen time they’re given. And of course Steve Martin and Martin Short are delightful as the pharaoh’s high priests.

It’s not just the music, the art and the vocal cast that make this movie work though, nor is the fact that the story of Moses rescuing a nation of slaves inspiring. There are clever choices within the storytelling itself. Unlike The Ten Commandments, which portrays Moses and Rameses as rivals from the start, this movie portrays them as quite close when they’re both princes of Egypt. Even when Moses returns, his adoptive brother, now the pharaoh, welcomes him with open arms. It’s that relationship turning sour that serves as the emotional core of the movie. As much as it’s both glorious and joyous that the slaves are freed, it’s also heart wrenching to see the friendship between brothers completely torn apart. All because of Rameses’ stubbornness.

Another fun aspect is how the high priests use smoke and mirrors, quite literally at times, to try and imitate the power of God. It’s great how all of the Egyptians are buying into their charades, even clapping. But the brief look of panic or awe in the priest’s eyes is enough to show that they’re scared of Moses’s God. And as the plagues move on, Rameses is less and less amused by their attempts to show Ra’s power. It’s subtle moments like this that help sell the story a bit more.

As much as this movie is clearly aimed more towards Christians and Jews, it’s a great story that might appeal to anyone interested in the movie’s themes and epic scope. The music is well crafted, the story is emotional, and yes, “When You Believe” is a beautiful number that’s completely deserving of its Academy Award. I would actually rank this quite high in my list of favourite animated movies of all-time.

It also shows that from the very start, DreamWorks was willing to branch out with different kinds of animated movies. Antz had some minor Disney-like elements, but features touches of adult humour that would never be greenlit by Disney. The Prince of Egypt is a directly religious movie, and I can’t imagine Disney greenlighting that kind of movie any time soon. This willingness to experiment with different genres is part of what separates DreamWorks from Disney. It also means that with bigger risks, not everything pays off all that well. But we’ll get into that soon enough.

Next up is The Road To El Dorado, followed by Chicken Run. If I take a look at DreamWorks’ only direct-to-video release, Joseph: King of Dreams (kind-of a prequel to Prince of Egypt), then that’ll be next. Otherwise, Shrek is next.

I am a relatively new comic book fan writing this blog for other new comic book fans and/or people who are interested in comics but don't know where to start. I've always been interested in writing, to the point where I have a college Creative Writing Certificate and I'm currently a year 2 Journalism student. I also have another blog where I mostly make fun of bad movies - www.healed1337.blogspot.com As for how I got into comics, I've always had a passing interest in superheroes: most notably Batman, Spider-man and the X-Men. Until February of 2011 (I think,) my only experience with any of these franchises came from the movies and video games. Shortly after I bought Marvel Vs. Capcom 3 however, I decided to check out X-23, Wolverine's female clone. I ended up reading her Innocence Lost origin story and enjoyed it. From there, I started reading various X-Men comics and it quickly exploded into my newest hobby. My other interests/hobbies include video games, movies, music, playing sports, my dogs and weird news.
View all posts by healed1337 →
This entry was posted in movie review, movies and tagged academy award, ancient egypt, animated movies, animation, cgi, charlton heston, christian movie, dreamworks, dreamworks movies, hans zimmer, jeff goldblum, Jeffrey Katzenberg, jewish movies, martin short, michelle pfeiffer, moses, movie review, movies, prince of egypt, ralph fiennes, rameses, red sea, religious movie, roger ebert, rotten tomatoes, sandra bullock, steve martin, steven schwartz, steven spielberg, the ten commandments, val kilmer, when you believe. Bookmark the permalink.

5 Responses to DreamWorks animated movies 2 – The Prince of Egypt