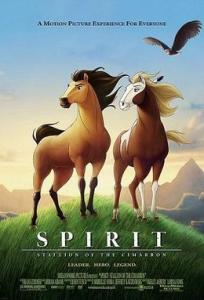 Once again, DreamWorks’s animation studio shows its willingness to experiment with different kinds of movies. It’s probably the main thing that separates them from Disney, which usually sticks to its formula at least a little bit. Disney’s formula has served it well over the years, and one can easily say that DreamWorks’s willingness to experiment hasn’t always panned out, but it does make for a fascinating catalogue of animated movies.

One such unique movie is Spirit: Stallion of the Cimarron. Featuring the directorial debut for both Kelly Asbury (who would later direct Shrek 2) and Lorna Cook, Spirit released in 2002 to a moderately successful $122 million on an $80 million budget. It opened fourth to Star Wars episode 2, Spider-Man and Insomnia (a thriller with Al Pacino, Robin Williams and Hilary Swank that earned a 92% on Rotten Tomatoes). No matter what way you look at it, that’s some really stiff competition.

Even ignoring that, Spirit earned a 69% rating on Rotten Tomatoes with an average score of 6.4/10. With that said, this movie has its fans. And while I never was interested enough to watch the movie before doing this blogathon, I was always at least a bit curious about it. I remember the trailers looking neat – it just didn’t feel like my thing. It did receive a nomination at the Academy Awards for Best Animated Feature though (losing to Spirited Away), so that was a promising sign at least.

There isn’t all that much information on the internet about this movie’s creation. It was written by John Fusco. Fusco is best known for his work in Western and Native American films, most notably Young Guns 1 and 2. He first wrote Spirit as a novel, and then adapted it into a screenplay. The movie’s development took 4 years, much longer than most of the early DreamWorks movies, but still less time than Shrek. It used a near 50/50 blend of traditional animation and computer animation, which the creators dubbed “tradigital animation”.

They bought a horse for the animators to study. They recorded real horse noises, both their vocal sounds and their hoof impacts. It’s worth noting that most of the film’s animators moved onto Shrek 2, and you can see their influences on the horses in that film, especially with Donkey’s slight redesign and better animation. Most of the locations in Spirit are based on Yellowstone National Park, Yosemite National Park, Glacier National Park and the Grand Teton mountain range. They also added a touch of the Grand Canyon in the climax for good measure.

As for the movie itself, I’m not entirely sure how I feel about it. I definitely respect the direction they took with a lack of talking animals. Besides Matt Damon’s narration for Spirit, none of the horses speak English. They express themselves entirely through natural horse sounds and body language, both of which are very well done. There’s a touch of human expression in them, but it all looks like something a horse could naturally do. Spirit is a good character, who goes through a well-crafted arc of starting off as an adventurous leader, a touch confrontational and perhaps a bit overly confident.

Over the course of the movie, he’s pushed by the US army’s attempts to break and domesticate him, yet he’s able to hold onto his sense of self. He befriends a Native American, even if he’s slow to trust him. At one point he becomes depressed, after seeing the apparent death of a love interest. At the movie’s conclusion he’s still the brave horse he started off as, but he’s calmed down and matured quite a bit.

While Spirit’s character journey is great, the story itself is just ok. It’s kind of predictable, very cliché at times, and there aren’t too many risks taken. For a movie that takes a risk by having animals that don’t talk, relying on horse noise recordings and body language, the story plays it way too safe. That’s not to say it’s a bad story – there are a couple times when I felt for Spirit. But I could also pretty much guess what was coming up next for the entirety of the movie. It’s too predictable. There are also a number of Bryan Adams songs on the soundtrack, and your mileage with his music may vary. Personally I could take him or leave him.

I could see this movie being a great watch for horse lovers and younger kids, but I wouldn’t really recommend it for anyone else. It’s a pleasant way to kill an hour and a half and that’s about it. Not sure what else to say about this one.

Next up is Sinbad: Legend of the Seven Seas, followed by Shrek 2 and Shark Tale. What’s coming up may be the highest concentration of DreamWorks animated movies that I’ve seen before, because after Shrek The Third, I’ve barely seen any of them. That’s one reason why I wanted to do this DreamWorks blogathon, because there are so many DreamWorks movies I’ve never seen.

I am a relatively new comic book fan writing this blog for other new comic book fans and/or people who are interested in comics but don't know where to start. I've always been interested in writing, to the point where I have a college Creative Writing Certificate and I'm currently a year 2 Journalism student. I also have another blog where I mostly make fun of bad movies - www.healed1337.blogspot.com As for how I got into comics, I've always had a passing interest in superheroes: most notably Batman, Spider-man and the X-Men. Until February of 2011 (I think,) my only experience with any of these franchises came from the movies and video games. Shortly after I bought Marvel Vs. Capcom 3 however, I decided to check out X-23, Wolverine's female clone. I ended up reading her Innocence Lost origin story and enjoyed it. From there, I started reading various X-Men comics and it quickly exploded into my newest hobby. My other interests/hobbies include video games, movies, music, playing sports, my dogs and weird news.
View all posts by healed1337 →
This entry was posted in movies and tagged animated, animated movies, animation, bryan adams, cgi, dreamworks, dreamworks movies, horses, kelly asbury, lorna cook, matt damon, movies, rotten tomatoes, stallion: spirit of the cimmaron, western. Bookmark the permalink.