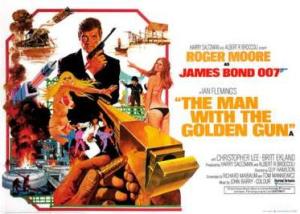 I don’t remember exactly what order I saw the James Bond movies in after the first few I watched, but today’s blogathon entry is about the first full Roger Moore movie I ever saw. It was probably the third or fourth full Bond movie I ever saw, and even before it started, I was excited to know what the movie was about. Why? Because I enjoyed the game mode in Goldeneye 007 on the N64 named after this movie. I’m sure I’d still enjoy it.

Before we get into this, I won’t be looking at the background for this movie like I normally do for these posts. Not because there’s nothing to say about the production, but there’s actually a lot to talk about with the movie itself.

Man With The Golden Gun is Roger Moore’s second outing as James Bond. It released in December of 1974 to mixed critical reception, yet it earned $97 million on a $7 million budget, making it a massive success. Man With The Golden Gun happens to carry a unique distinction in the Bond series. It’s got by far the lowest kill count in the franchise, both for James Bond’s kills and for the total number of people killed in the movie. That actually becomes a plot point. Probably my favourite aspect of the Roger Moore Bond movies as a whole is that it looks at an experienced agent, but one who’s starting to tire of all the killing. He’s an agent who’s become a bit more reserved in his approach, not that he’s unwilling to take huge risks.

Bond even straight up says to the main villain in this movie that he only kills at the express command of his government, even though he admits killing Scaramanga would be a pleasure. This general trend plays through all of the Moore Bond movies, but this movie addresses it directly. Francisco Scaramanga, a world famous hitman, provides a good opposite of this. He loves killing. His reputation is as such that he can charge $1 million for every hit – sometimes more. Even his gun and its bullets are made of gold, just for an added signature. The fact that these two killers are very comparable in skill, intelligence and ability is by far the best aspect of this movie. Despite being on the total opposite end of the morality spectrum, they clearly have a begrudging respect for each other. It certainly helps that Scaramanga is played by the very charismatic Christopher Lee, right in his prime.

Another interesting aspect of Man With The Golden Gun is its plot ties into the threatened energy crisis going on at the time of filming (1973). Scaramanga “acquires” the tech needed for completely renewable energy from his clients, and is preparing to sell it to the highest bidder. He even considered selling it to the Arabs so that it wouldn’t be released (their embargos caused the energy crisis). This is also used to show Scaramanga’s intelligence, his determination, and to an extent his love of theatrics.

But Scaramanga’s real goal in the movie is to kill James Bond. Not just from the shadows however; he wants it to be in a fair duel, to show that he’s the best killer on the planet. It leads to a finale that’s kind of epic. It’s a slow, methodical duel that feels tense throughout, even on repeat viewings.

The theme song by Lulu is pretty fun too.

Unfortunately, that’s about where the good parts of this movie end. As Live Or Let Die reflected the Blaxploitation craze before it, this movie reflects the martial arts craze going on at the time. That isn’t inherently a bad thing, in fact it fits better with James Bond than blaxploitation does. However it distracts from the main plot at times. Most of the locations are in Asia and that’s perfectly fine. It makes good use of locations set in Thailand, Hong Kong and Macau. But some of the fight scenes just feel bizarre, like Bond being thrown into some sort of martial arts school and ordered to duel people until he’s killed, instead of just executing him on the spot when he’s captured. I get that Bond villains using elaborate traps to kill Bond is a thing with this series, but that scene just feels odd. And then all of these students are beaten up by two teenage girls. It’s cheesy moments like this that clash with the far more serious tone of the Scaramanga plot.

The comedy in this movie goes full blown goofball on more than one occasion. Not only does the annoying sheriff character from Live or Let Die re-appear while he’s on vacation with his somewhat less annoying wife, but he even joins Bond in the car chase. The fact that Bond is clearly annoyed makes him a bit more bearable, and some of his fear is mildly amusing, but he feels completely out of place. And of course there’s one particular car jumping stunt that’s impressive, but the sound editor decided to put in cartoon sound effects. Why? What’s the purpose of putting there? It, along with the annoying American cop, almost ruins an otherwise great moment.

There’s also the main Bond girl, fellow MI6 agent Mary Goodnight, who is described as having some sort of previous connection with Bond. The acting and writing behind their romance is well done and compelling, giving this movie at least a hint of an emotional core. Unfortunately, she’s also a complete idiot. While trying to plant a tracker on Scaramanga’s car, she gets herself captured while also losing an important gadget necessary for Scaramanga’s renewable energy project. While watching Bond trying to retrieve the object after his duel with Scaramanga, she accidentally turns a deadly laser on by pressing a button with her butt. There are more dumb things she says and does, but I’d rather you see for yourself if you decide to watch this movie.

Goodnight is portrayed by Britt Ekland, a British sex symbol at the time, and was once married to Peter Sellers. Peter Sellers actually portrayed James Bond in the unofficial Casino Royale movie in 1967 (part of the reason they couldn’t make Casino Royale until 2006). That gave Ekland a previous connection to the Bond franchise. There’s your fun fact for the day.

Like I said, this is the most bloodless James Bond movie in the franchise. Due to the nature of the story and Bond’s own character development, that actually works in Man With The Golden Gun’s favour.

That about sums up this entire movie. Roger Moore is good in this, showing a good balance between his charm, genuine curiosity when Scaramanga is showing him his operation, and deep thought during the duel at the end of the movie. The dynamic between Bond and Scaramanga is arguably the best hero/villain dynamic in the entire franchise. But all of the good is marred by overly goofy comedy, some bizarre writing and several editing decisions that will make you scratch your head. It’s a shame, because if this movie took itself more seriously, it could have been brilliant.

Next up is The Spy Who Loved Me, which is easily the best Roger Moore Bond movie. After that, we’re getting into straight up bizarre territory with Moonraker, followed by For Your Eyes Only.

I am a relatively new comic book fan writing this blog for other new comic book fans and/or people who are interested in comics but don't know where to start. I've always been interested in writing, to the point where I have a college Creative Writing Certificate and I'm currently a year 2 Journalism student. I also have another blog where I mostly make fun of bad movies - www.healed1337.blogspot.com As for how I got into comics, I've always had a passing interest in superheroes: most notably Batman, Spider-man and the X-Men. Until February of 2011 (I think,) my only experience with any of these franchises came from the movies and video games. Shortly after I bought Marvel Vs. Capcom 3 however, I decided to check out X-23, Wolverine's female clone. I ended up reading her Innocence Lost origin story and enjoyed it. From there, I started reading various X-Men comics and it quickly exploded into my newest hobby. My other interests/hobbies include video games, movies, music, playing sports, my dogs and weird news.
View all posts by healed1337 →
This entry was posted in movies and tagged 007, 007 man with the golden gun, 007 movies, action thriller, britt ekland, christopher lee, francisco scaramanga, james bond, james bond movies, lulu, man with the golden gun, martial arts, mary goodnight, roger moore, spy movie, the man with the golden gun. Bookmark the permalink.