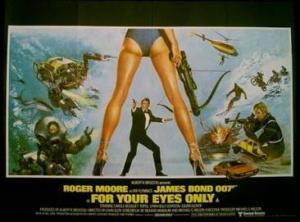 Before we begin, this is one of the two remaining Bond movie’s I’ve never seen before. I’I previously watched the first half or so (up to the skiing action scene) years ago on TV, and had virtually no memory of it. All I remembered was a general idea of what happened in the opening, and the slow, romantic tone of the opening song. It was also the first Bond movie I saw back then that didn’t leave much of an impression either way. Until now, I never felt any desire to watch this movie in full.

For Your Eyes Only, Roger Moore’s fifth outing as James Bond and the twelfth movie overall, is the first movie in the franchise to get released in the 1080’s. It was originally intended to be the next movie after The Spy Who Loved Me, but Star Wars’ release convinced Albert R. Broccoli to move forward with the sci-fi heavy Moonraker instead. And just like Moonraker, opinions on this movie are very mixed. This time though, opinions are mixed for completely different reasons.

After Moonraker, they not only went back to make For Your Eyes Only, but they decided to take on a grittier, more realistic approach. The themes are darker, touching on revenge and its consequences. The fight scenes are slower and more methodical. There’s much less of a focus on gadgets and more of a focus on Bond relying on his own wits to survive. Bond teams up with a group of smugglers to take on the main villain. Bond’s car even self-destructs after his enemies try to break into it, forcing him to rely on Bond girl Melina Havelock’s bug-like car. The action is much more down to earth, with very few scenes of Bond taking on multiple opponents at once, on his own.

They decided to go this route despite Moonraker’s success because otherwise, they’d need to keep getting more ridiculous. That route would eventually backfire horribly. The plot vastly tones down the global domination of the previous two movies, focusing on multiple groups trying to get a hold of a device that helps the Royal Navy coordinate its submarines. It’s a straight cold war thriller with a straightforward plot, with most of the reveals changing who Bond can trust more than anything else.

This film also marks the final entry in the franchise to be released solely by United Artists, which merged with MGM soon after the film’s release. It also marks the directorial debut for John Glen, who previously acted as an editor and a second unit director in three other Bond movies, as well as 1978’s Superman and 1969’s The Italian Job. He would end up directing all 5 James Bond movies made in the 1980’s, up to License To Kill. That makes him the record holder for being the lead director for the most Bond movies. More impressively, he directed all of those movies in a row.

After Roger Moore’s original 3-film contract ended with The Spy Who Loved Me, the actor negotiated roles on a film by film basis. With his increasing age, uncertainty arose with his involvement in For Your Eyes Only. They considered Lewis Collins, Ian Ogivy and even Michael Billington, who previously appeared in The Spy Who Loved Me as Agent XXX’s lover (killed early in the movie). That third choice would have felt weird for that very reason. They also considered Michael Jayston, known for portraying a spy in the British TV series Quiller. He eventually played Bond in a BBC radio production of You Only Live Twice. Timothy Dalton (James Bond in two movies I’ve already looked at) was also considered, but he declined, as he disliked the direction the series was taking at the time. But when Moore agreed to play Bond again, all of these considerations ended.

It’s also worth noting that Bernard Lee, who played M in every Bond movie up to this point, died of stomach cancer after filming began, but before he could film his scenes. Out of respect, they didn’t hire another actor to take his place. Instead, they rewrote the script so that M was on leave at the time, letting Chief of Staff take over the role as acting head of MI6.

The film features a lot of underwater sequences, including one where Bond and Havelock are searching for the submarine control device. They actually filmed most of those scenes on a dry soundstage, using lighting effects, slow-motion photography, wind, and bubbles added in post-production to simulate being underwater. This was mostly because Carol Bouquet (who portrays Havelock), had a pre-existing health condition that prevented her from performing underwater stunts.

As this movie takes on a darker tone, there’s a moment where Bond kicks a car, which is enough to send it over a cliff with a villain inside. Moore was reluctant to film the scene, saying “it was Bond-like, but not Roger Moore Bond-like.” Co script writer Michael G Wilson later said that Moore needed persuading to be more ruthless in his portrayal. They toyed with a few other ways to do the scene, but eventually Moore agreed.

There are also scenes showing Bond rock climbing. Moore, suffering a great fear of heights, resorted to moderate drinking to calm his nerves. There’s one particularly tense scene involving his rock climbing where Moore genuinely looks scared. Even though Moore was an accomplished skier, he wasn’t insured to ski at the time of filming. Instead, they filmed most of Bond’s skiing with stuntmen, with close-ups of Moore strapped to a toboggan. For its time, the effects were fairly convincing.

The title song is sung by Sheena Easton, who also appeared in the opening credits, becoming the first song artist to appear on screen in a Bond film. The producers also wanted Blondie to perform the song, and they wrote and recorded the song, but they declined when they discovered that they were supposed to sing a song written by Conti and Michael Leeson. Blondie’s version of the song can be found on their 1982 album, The Hunter. In my opinion they’re both good songs, even if they’re completely different in tone. But you could argue that with a Bond movie that took on a more serious tone, Easton’s version fits better.

Here are both versions of the song, in case you’re curious.

For Your Eyes Only earned $195 million on a $28 million budget, falling just short of Moonraker’s $210 million. It actually set the all-time opening day record in the UK at just short of 15,000 pounds. General reception was mixed. The Guardian gave it a negative review, calling it too long and boring between the stunts, even if they praised the stunts. The Daily Express on the other hand described it as one of the best movies yet, with a good balance between humour and excitement.

General opinions on the movie haven’t changed much over time, with IGN ranking it the 6th best movie in their 2006 list, while others calling it a serviceable, but forgettable entry. Entertainment Weekly even shows a mixed reception within their staff, with one calling Melina the worst bond girl in the Roger Moore years, and another putting her as the 10th best bond girl overall. The opening theme song was nominated for the Best Original Song at the Academy Awards, eventually losing to Arthur’s Theme.

As for my own thoughts on For Your Eyes Only, they’re kind of mixed. I like the movie’s more serious tone in contrast to the general silly direction of the Roger Moore years. Some of the action scenes feel really intense. For example, there’s an underwater fight where Bond is pinned under a heavy door while fighting a man in a heavy diving suit, while Havelock’s air supply is cut and she’s about to drown. The largest action scene is a shootout in a warehouse with multiple people on both sides of the fight, and both sides are using strategy instead of just running in, guns blazing. The story is enough to keep the movie rolling, and Havelock’s revenge plot over her murdered father adds at least some dimension to it. And of course there’s this previously mentioned rock climbing scene, which I’ll just show you a video clip of.

That music by the way is actually from the duel between Bond and Scaramanga in Man With The Golden Gun, yet it fits really well here too.

On the other hand, this movie feels like it’s trying too hard to be a Sean Connery movie. The opening features an unnamed villain who’s supposed to stand for Blowfeld of SPECTRE, yet Eon Productions couldn’t legally use SPECTRE or Blowfeld at the time. Bond visiting his wife’s grave is a nice emotional moment, but it feels like it’s too little, too late. Also, as much as Moore does a great job with the material given to him, he’s not Sean Connery. In his advancing age, he’s not able to handle the brutal fight scenes as well as he used to, and there are times when he seems mildly uncomfortable with this more serious take on the franchise. Also while the story is enough to keep the movie going, there’s not much to it beyond the reveal of who the main villain actually is.

In short, I both like this movie and I find it boring. I’m somewhere in the middle, and it’ll take time to figure out how I ultimately feel about this one. At the very least, I like it better than Moore’s first two outings, nostalgic feelings for Man With The Golden Gun aside. If you’re a Bond fan who hasn’t seen For Your Eyes Only, this is at least worth a watch. Maybe you’ll really enjoy it, or maybe you’ll find it boring. Maybe you’ll be like me and you’ll be somewhere in-between. It makes me wonder how Moore would have done with a more serious Bond movie when he was still younger and able to do more stunts.

Next up is Octopussy, which I saw once years ago and haven’t seen it again since. I’m both looking forward to and dreading that one. Then it’s A View To Kill, Moore’s last outing. I haven’t yet decided whether I’ll go back to DreamWorks next month or if I’ll try to wrap this up and do both the Pierce Brosnan and Daniel Craig movies in October. If I do go back to DreamWorks, it’ll start with Madagascar. If I finish up this Bond blogathon, we’ll be moving onto Goldeneye after View To Kill.

I am a relatively new comic book fan writing this blog for other new comic book fans and/or people who are interested in comics but don't know where to start. I've always been interested in writing, to the point where I have a college Creative Writing Certificate and I'm currently a year 2 Journalism student. I also have another blog where I mostly make fun of bad movies - www.healed1337.blogspot.com As for how I got into comics, I've always had a passing interest in superheroes: most notably Batman, Spider-man and the X-Men. Until February of 2011 (I think,) my only experience with any of these franchises came from the movies and video games. Shortly after I bought Marvel Vs. Capcom 3 however, I decided to check out X-23, Wolverine's female clone. I ended up reading her Innocence Lost origin story and enjoyed it. From there, I started reading various X-Men comics and it quickly exploded into my newest hobby. My other interests/hobbies include video games, movies, music, playing sports, my dogs and weird news.
View all posts by healed1337 →
This entry was posted in movie review, movies and tagged 007, academy award, albert r. broccoli, bernard lee, blondie, eon productions, ernst stavro blowfeld, for your eyes only, james bond, james bond 007, john glen, mgm studios, mi6, michael g wilson, roger moore, sheena easton, spectre, timothy dalton, united artists. Bookmark the permalink.