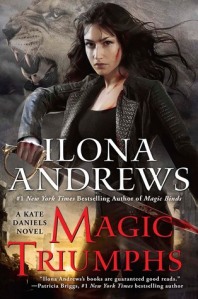 It’s been a while since I’ve touched on this book series. In fact it’s been a while since I’ve found the time to read any novel because of my new job. It doesn’t help that I’m falling behind on comics. But with NaNoWriMo less than a week away, reading a novel is part of my warm up. I’m glad to finally finish this series after the first entry is one of the books that helped me get back into reading books in the first place. The previous entry released in September of 2016, and this one released earlier this year. As much as I wanted to pick this up when it released, the delay, in addition to my new job, caused me to lose track of its release.

Magic Triumphs, the tenth and final book in the Kate Daniels series, concludes the urban fantasy story by husband and wife writing team under the pseudonym, Ilona Andrews (Gordon and Ilona Andrews). Well, officially it’s called an Urban Fantasy, but I’d sooner describe it as somewhere between straight fantasy, dark fantasy and one could even refer to the series as a whole as epic fantasy. Obviously because this is the final book in the series, there will be some spoilers for earlier entries. In case you don’t want those, I’ll link to my reviews of the first three books below, and then you can skip the next two paragraphs.

The previous book ended with Kate realizing she was pregnant. After a brief prologue, this book truly kicks off with that baby at about 13 months. There are a number of scary implications that comes with, one of which being visions Kate’s received about an inevitable battle with her ancient magical warlord father, Roland. One of the more fascinating elements of this series is the contradictory relationship between Kate and her immortal father. On the one hand, he’s tried to have her killed for pretty much all her life, and he’s also sent people to kill her son. On the other hand, they’ve held several civil conversations since they first met in book 7, he’s given her very useful advice, and they’ve even helped each other out on occasion. There’s even a touch of love between them. It’s hard to explain in one paragraph, but as you read about their relationship developing, it makes sense. Well, it makes sense in a twisted sort of way.

In addition to the upcoming war with her father, she’s taken on more responsibilities than she ever dreamed of. She started the series as a lone mercenary, and now she’s basically the protector of all of Atlanta, with one power organization pretty much worshipping her, others often looking for her help. Although some of her alliances are much more uneasy, they’ll at least show up for any meeting she calls. She’s got a were lion for a husband that used to be the Beast Lord of the local shapeshifters, before he retired from the role, and he gets a bit of an upgrade in this book. It all weighs down on her, almost to the breaking point.

As much as Kate’s family is a major threat in this book, the real enemy is something even more dangerous. Magic Triumphs starts with a rather brutal crime scene involving a full neighborhood’s worth of people essentially boiled into a giant puddle, with all their bones missing. This scene is described in graphic detail, which is normal for this series, but still taking the brutality a bit further than normal. It’s the perfect way to set the tone for what is to come. What follows is a book that is still delightfully weird like the rest of this series, but one that’s significantly more dramatic than most earlier entries. It feels bigger and more important. Everything about this book feels like it’s a finale.

The action scenes are well varied. Several scenes put Kate in a very dangerous situation. Some mostly have her watch her husband or one of her allies tearing apart an enemy from the distance. There’s one particularly entertaining moment where she unleashes her abilities and absolutely slaughters an entire squad of mutilated assassins, right in front of a group of knights that previously doubted her abilities. The final battle feels huge, showing a general look of three armies clashing at once, before Kate directly gets involved with the most dangerous enemy she’s ever faced, yet with the most powerful set of allies she’s ever gathered to help. It’s a good balance that helps keep this book entertaining and giving it a fast paced feel.

The writing style is also something I admire. Ilona’s writing finds ways to make environmental descriptions entertaining. There’s a good mix of longer paragraphs of exposition, and short, two word paragraphs to throw in quick thoughts to lighten the mood. “Why me?” is almost an internal catch phrase for Kate, and it never fails to make me smirk just a little.

The Kate Daniels series started off fairly well with Magic Bites, even if that book had some faults. It didn’t explain how its universe worked all that well, and Kate sometimes came off as a bit too caustic. Magic Burns was better than the first in pretty much every way. With the exception of book 6 (where one protagonist does things that border on unforgivable), the series has improved with every entry. This book is no exception, concluding the series in a very satisfying way. It’s delightfully weird. It’s often amusing. It finds a great balance between dark, dramatic storytelling and fun. Most of all, it ends in a way that just feels right, leaving the door open for further stories in case the writers decide to, but satisfying enough that we don’t need more. I can’t think of one bad thing to say about this book from a quality standpoint. My only complaint is that I waited this long to read it.

I am a relatively new comic book fan writing this blog for other new comic book fans and/or people who are interested in comics but don't know where to start. I've always been interested in writing, to the point where I have a college Creative Writing Certificate and I'm currently a year 2 Journalism student. I also have another blog where I mostly make fun of bad movies - www.healed1337.blogspot.com As for how I got into comics, I've always had a passing interest in superheroes: most notably Batman, Spider-man and the X-Men. Until February of 2011 (I think,) my only experience with any of these franchises came from the movies and video games. Shortly after I bought Marvel Vs. Capcom 3 however, I decided to check out X-23, Wolverine's female clone. I ended up reading her Innocence Lost origin story and enjoyed it. From there, I started reading various X-Men comics and it quickly exploded into my newest hobby. My other interests/hobbies include video games, movies, music, playing sports, my dogs and weird news.
View all posts by healed1337 →
This entry was posted in novel review and tagged blood magic, curran, dark fantasy, delightfully weird, epic fantasy, fantasy, fantasy novel, gordon andrews, ilona andrews, kate daniels, magic, magic triumphs, novel, novel reading, novel review, roland, urban fantasy. Bookmark the permalink.