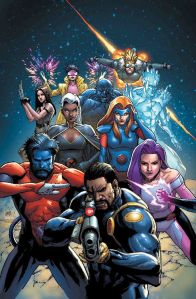 It’s been a while since we’ve had a series titled Uncanny X-Men, and even when we last had that, it wasn’t the flagship X-Men series. In the meantime, it’s easy to feel that the X-Men franchise has become overly large and bloated, with no real sense of direction since Avengers vs. X-Men. That’s not to say there haven’t been good runs. Brian Michael Bendis’s run on All-New X-Men and Uncanny X-Men was good, even if it generally focused more on characters than story. There have been some great X-Men solo titles and a handful of brilliant minis here and there. But with today’s (well … yesterday’s) release of Uncanny X-Men 1, it feels like the franchise is finally trying to return to the basics.

First off, Uncanny X-Men 1 is a massive project of a book. For $8, you’ve got 60 pages of story, divided evenly between the main story, and a collection of three backup stories that ultimately flow into one narrative. Considering most comics are $4 for 20 pages these days, that’s a pretty good deal. The main story features three writers sharing writing duty: Ed Brisson, Matthew Rosenberg and Kelly Thompson. Each of these writers also handle one of the backup stories in turn, with Thompson also penning the epilogue. For the sake of simplicity for this review, I’ll just talk about both halves of this comic as one. Also because it’s such a long book, this review will be longer than normal.

The main story mostly focuses on building up some sort of mysterious threat. Whatever this threat is, it’s interfering with Jean Grey’s telepathy, Storm’s weather abilities, causing Kitty Pryde’s phasing to go haywire, and is causing multiple other characters to lose their minds in various ways. The final page reveals that this mysterious figure is also capable of capturing an extremely powerful X-Men villain, but I won’t even hint as to which one. It all feels intriguing and mysterious, but I won’t go so far as to call it exciting.

The rest of the comic is balanced out with a couple well-written character moments. There’s an amusing moment with Iceman complaining about X-23 using her claws as glorified forks. There’s a more dramatic moment with two of the X-kids complaining about how they’ve never been given a chance at the big leagues. A lot of Academy X era fans would fully agree with that sentiment. One of the backup stories is basically Bishop investigating a crime, like his District X days. Jean has a bit more of a dark moment that comments on how depressing the news can be at times, without getting into specific allegories. As a moderate who often gets sick of political bickering from either side, that’s the way I’d prefer to see it.

There are also several great action scenes. The earliest action scene pits the younger X-kids against the Mutant Liberation Front. I’ve seen some people mildly complain that they don’t fare so well in the fight, but to that I say they also just survived a plane crash. One of them is unconscious, and another clearly wasn’t feeling right even before the crash. It’s ok for them to not be at their best. This also leads to my personal favourite moment in this comic – X-23 pretty much soloing the entire Mutant Liberation front, in a mostly blank panel that only consists of “snickt”, “shiiik”, and “shluuuk”. There’s another fight scene that doesn’t go as well for the X-Men, involving a small army of Multiple Man dupes who don’t seem to be thinking straight. And of course there’s a bit of a confusing fight scene within the trio of backup stories, where someone is taking over the minds of normal citizens and giving them unexplained powers. All of this action is both written and drawn well, even if we’re clearly not yet supposed to know what’s going on with two of them.

As vague as the overall story is, there is at least one subplot that’s made clear. A major pharmaceutical company is developing a vaccine for babies that will stop them from ever gaining any kinds of mutant powers. This company seems to see this vaccine as something good, but it gives the X-Men a clear opponent going forward, as well as a clear target for their more extreme villains.

Overall, the story feels like it’s got a good balance of tension building, mystery, and a clear sense of direction. Some of the dialogue feels a touch off, but overall it’s well written, and for the most part all of the characters with major roles feel like they’re in-character.

The art in the main story is handled by Mahmud Asrar. For the most part, it’s great art. Facial expressions do a good job at conveying emotions, like Jean’s confused look when things get weird, Laura’s smug smile when she “convinces” Iceman to stop commenting on her claw-forks, and the terrified look in the Mutant Liberation Front’s faces when they know they’re about to get trounced. Not every panel has a full background (with 30 pages, can you really blame Asrar?). But for the panels that do have backgrounds, they’re well detailed, like the kitchen cupboards complete with the light that Nightcrawler is hanging off of, Manhattan City Hall complete with its classic architecture that looks quite similar to the pictures I quickly googled, and a variety of signs and facial expressions in the crowd that’s watching the pharmaceutical company’s live statement. I’ve seen more detailed art by Asrar, but it’s great overall.

The colouring by Rachelle Rosenberg is also great. It uses a variety of brighter environments and darkened scenes. There’s often different shades within characters’ hair to give it a bit of shape and depth. Also, when Psylocke is using her powers, her purple telepathy feels muted in a way that just feels right.

The art in each of the backup stories is drawn by different artists. The first, Bishop’s story, is drawn by Mirko Colak. It’s got a gritty feel to it that also reminds me of early 2000’s comics in the best way possible. The art is simple in style, but there’s still plenty of detail in a hidden lab that Bishop comes across. The second story, starring Jean, is drawn by Ibraim Robertson. It’s highly detailed on every level, with fairly realistic looking characters, and even partially transparent shards of glass from a broken window. It also uses great lighting effects when powers are being thrown around. The third story, and the epilogue, are both drawn by Mark Bagley. It’s a bit more of a cartoony feel so opinions may vary, but it kind of feels like the best sort of style when focusing on the X-teens. It also fully embraces the chaotic fight scene on the streets. As far as I can tell, Guru-efx handles all the colouring for the backup stories, and the detail put into the colouring always feels like it matches the general art style.

Uncanny X-Men 1 is a fairly ambitious comic. It’s got 60 pages worth of story, and the writing team does their best to make good use of it. There’s a lot of exposition, but it never feels excessive or overbearing. It helps that the exposition is balanced out with several fight scenes, a handful of good character moments, and clear tension building. This comic isn’t quite great, as the main story is still vague and some of the minor characters feel slightly off. As a whole, this is a strong start to a series that clearly has potential. I have faith that this writing team can pull this off, and I hope they do, because it’s been too long since we’ve had a flagship X-Men title worth following. The X-Men is a fantastic franchise, and it could use getting back to the basics after years of mistreatment. As for this issue, it’s definitely worth checking out for X-Men fans.

I am a relatively new comic book fan writing this blog for other new comic book fans and/or people who are interested in comics but don't know where to start. I've always been interested in writing, to the point where I have a college Creative Writing Certificate and I'm currently a year 2 Journalism student. I also have another blog where I mostly make fun of bad movies - www.healed1337.blogspot.com As for how I got into comics, I've always had a passing interest in superheroes: most notably Batman, Spider-man and the X-Men. Until February of 2011 (I think,) my only experience with any of these franchises came from the movies and video games. Shortly after I bought Marvel Vs. Capcom 3 however, I decided to check out X-23, Wolverine's female clone. I ended up reading her Innocence Lost origin story and enjoyed it. From there, I started reading various X-Men comics and it quickly exploded into my newest hobby. My other interests/hobbies include video games, movies, music, playing sports, my dogs and weird news.
View all posts by healed1337 →
This entry was posted in comic review, comics and tagged academy x, bishop, bobby drake, comic review, comics, district x, ed brisson, guru-efx, ibraim roberson, iceman, jamie madrox, jean grey, kelly thompson, kitty pryde, laura kinney, mahmud asrar, mark bagley, marvel comics, marvel legacy, matthew rosenberg, mirko colak, multiple man, mutant liberation front, nightcrawler, ororo munroe, psylocke, rachelle rosenberg, storm, uncanny x-men, x-23, x-men. Bookmark the permalink.