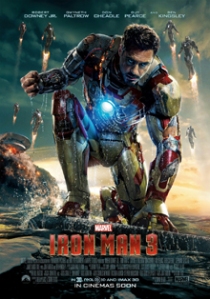 Pretty much exactly one year after Avengers released, Iron Man released his second sequel, and Marvel’s second billion dollar movie. In fact, two movies released in 2013 earned over $1 billion, and Disney was behind both of them (Frozen earning about $65 million more than Iron Man 3). It’s also worth noting that the 3d re-release of Jurassic Park also pushed that movie’s total earnings past $1 billion, but that’s not a 2013 release nor did it earn $1 billion in 2013 alone, so it doesn’t really count.

Anyway, a conflict between Paramount Pictures and Disney happened shortly after Disney bought Marvel, which delayed the timing and possible distribution of a third Iron Man movie. Disney ended up paying Paramount at least $115 million for the worldwide distribution rights, and the three of them announced at that point the release date, which didn’t change. Jon Favreau announced early on that he didn’t plan on directing Iron Man 3, so he could focus on a film called Magic Kingdom instead. Magic Kingdom is basically supposed to be Night at the Museum, but in Disneyland, where all the Disney characters would come to life after the park closes. As of 2014, when Favreau was working on the live action adaptation of The Jungle Book, he still expressed interest in the project. Sadly there really hasn’t been much news about it since, because it sounds like a neat idea. Favreau did remain on as an executive producer though, and also portrayed Tony Stark’s personal bodyguard again (now promoted to head of Stark Industries security).

Shane Black was soon hired on to direct Iron Man 3, with Robert Downey Jr. recommending him after working together in Kiss Kiss Bang Bang. Black had previously written Lethal Weapon 1 and 2, and also acted in Predator, RoboCop 3 and voiced an off-screen character in the Marvel One-Shot: Agent Carter that appears on the Iron Man 3 Blu-ray.

From the start, Black wanted a different feel from the first two Iron Man movies. Instead of two guys in a suit fighting each other, he wanted to go more for a Tom Clancy style thriller, with Iron Man fighting real-world type villains. Black and writer Drew Pearce also wanted a larger scale, with the third act being a little more over the top, while the second act would take a step back. They compared the movie’s second act to Sullivan’s Travels, having Tony meeting people during his journey. Both the opening and ending of the film changed multiple times during pre-production, with one being a flashback to Tony’s childhood, and another starting mid-plot like the first movie, showing the aftermath of Tony crashing in Tennessee before the narration described how he got there.

They also decided early on to have the movie take place at Christmas. Especially since a large part of the movie isolates Tony, and having that isolation take place at Christmas only enhances the effect. There’s also a kid character played by Ty Simpkins who, according to Pearce, acts as a sort of Ghost of Christmas Past. To be honest, I forgot this movie took place during Christmas until watching it again, but after thinking about the movie’s themes, it actually works in the movie’s favour.  It’s also subtle about it, save for some of the visuals and the occasional dialogue.

Fun fact – the Chinese release of the movie is 4 minutes longer, mostly with extra footage of Dr. Wu, the surgeon who removes the shrapnel from Tony’s chest at the end of the movie. I wouldn’t mind seeing some of that extra footage.

In addition to earning $1.215 billion, Iron Man 3 was well received by critics. It earned an 80% rating on Rotten Tomatoes, with an average score of 7/10. The Hollywood Reporter review stated “After nearly crashing and burning on his last solo flight in 2010, Iron Man returns refreshed and ready for action in this spirited third installment.” Psychology Today commented that the film portrayed accurate symptoms of post-traumatic stress disorder. Empire magazine, while giving the movie a positive review, did note that the villains’ motivations were a bit murky and unconvincing.

I’m not entirely sure what The Star-Ledger review means by saying this movie doesn’t have the emotional aspect of the first movie or the flashy villains of the second though. I’d say Iron Man 3 is just as emotional, if not more so, than the first one, while Whiplash was a much weaker villain than this movie’s villains.

This movie does have one controversial aspect though – the way it handled The Mandarin (played by Ben Kingsley). In the comics, The Mandarin is pretty much Iron Man’s arch nemesis. He’s a genius scientist with deadly martial arts skills and 10 powered rings adapted from alien technology, each granting him different abilities. In this movie, he’s first portrayed as a dangerous terrorist, but the twist is, he’s just an actor, hired by the real villains to take credit for accidental explosions. Ben Kingsley did a great job with the role, speaking with unusual enough patterns to be disconcerting. Personally I enjoyed the twist and I think it actually benefits the story, but I get why the more dedicated Iron Man fans don’t.

(Don Cheadle continues to be great as War Machine/Iron Patriot)

As for my other thoughts on the film, I really like this one. Tony Stark’s post-traumatic stress disorder I mentioned earlier came from his experiences in The Avengers. He’s used to science being the solution to everything, yet in The Avengers, he experiences magic through Thor’s hammer and Loki’s abilities, not to mention he nearly dies at the end of the movie. This PTSD gives Tony a real sense of venerability. Throughout Iron Man 3, he experiences multiple panic attacks, he has trouble sleeping, and this leads to him making several rash decisions that puts himself and Pepper Pots in danger. The first act introduces us to his symptoms, as well as most of this movie’s major characters.

This leads Tony to his lowest point since being captured in a terrorist cave. Everyone thinks he’s dead, the one suit he’s got with him is heavily damaged and out of power, and he’s stranded in a small town in Tennessee. Meanwhile, Pepper is captured by the makers of Extremis, experimental regeneration technology that still has a rather explosive bug, literally. There are a couple worrying elements in the story to someone who may be reading this, one being that Tony is helped out by a young child, but that’s one of the dramatic elements of this movie that actually works. The kid is not only acted well by Ty Simpkins, but the two characters play off each other well. The kid even helps Tony get through his panic attacks with a simple bit of advice – “why don’t you just build something”.

It’s also neat to see Tony fighting outside of his suit more often in this movie. That build something line leads to Tony creating a bunch of weapons out of everyday materials, like bombs inside Christmas ornaments and gas powered guns. And when the Iron Man suits do enter the fray, the action is bigger and more epic than either of the first two Iron Man movies. The climax in particular is a huge fight with dozens of Iron Man suits flying around, being controlled entirely by Jarvis. It’s such a creative and fun fight scene. But perhaps the most impressive action scene is when Iron Man needs to hurry to save over a dozen people who were just flung from an airplane. It’s especially impressive when all of the stunts were shot practically.

Robert Downey Jr. actually concluded his Marvel Cinematic Universe contract with this movie, although he’s clearly signed on for more. In fact we may see an Iron Man 4 at some point. They haven’t officially announced it, but they have spoken about some ideas. And considering the short, “All Hail The King”, suggests that there is a real Mandarin, we may still see Iron Man’s arch nemesis in a fourth movie instead of him being a plot twist. But for now, Iron Man 3 wraps up the Iron Man trilogy in a satisfying way. Is it perfect? No. But despite its flaws and the Mandarin controversy, Iron Man 3 is entertaining and dramatic enough to call it a good movie.

Next up is what is pretty much universally considered the weakest MCU movie so far, Thor: The Dark World. After that, we reach what may be the best year for the MCU yet, with Captain America: The Winter Soldier and Guardians of the Galaxy (both released in 2014).

I am a relatively new comic book fan writing this blog for other new comic book fans and/or people who are interested in comics but don't know where to start. I've always been interested in writing, to the point where I have a college Creative Writing Certificate and I'm currently a year 2 Journalism student. I also have another blog where I mostly make fun of bad movies - www.healed1337.blogspot.com As for how I got into comics, I've always had a passing interest in superheroes: most notably Batman, Spider-man and the X-Men. Until February of 2011 (I think,) my only experience with any of these franchises came from the movies and video games. Shortly after I bought Marvel Vs. Capcom 3 however, I decided to check out X-23, Wolverine's female clone. I ended up reading her Innocence Lost origin story and enjoyed it. From there, I started reading various X-Men comics and it quickly exploded into my newest hobby. My other interests/hobbies include video games, movies, music, playing sports, my dogs and weird news.
View all posts by healed1337 →
This entry was posted in comics, movie review, movies and tagged ben kingsley, christmas, don cheadle, empire magazine, extremis, gwenyth paltrow, iron man, iron man 3, iron patriot, marvel cinematic universe, marvel movies, mcu, movies, pepper potts, post-traumatic stress disorder, psychology today, ptsd, robert downey jr., rotten tomatoes, stark industries, superhero movies, the hollywood reporter, the mandarin, the star-ledger, tony stark, war machine. Bookmark the permalink.