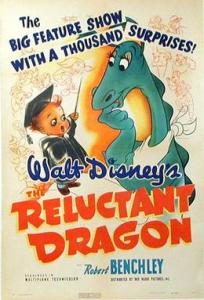 While Disney has released hundreds of very successful live action movies over the years, when one talks about Disney, they generally think of their animated movies first. Disney Animation Studios is a singular studio that’s existed since 1923, having released their first feature film, Snow White and the Seven Dwarfs, in 1937. In addition to their hundreds of short films, the studio has now released 57 feature films, with their 58th (Frozen 2) slated for release later this year. No other animation studio is even close to that many releases, and they’re good far more often than not. I would know – a couple years ago I went through all then 56 of them in order of release in a matter of 3 months (I’m still not entirely sure how I managed that).

The Reluctant Dragon, released in 1941, is the first of these associated films to release. This is an interesting one. It mirrors the package films that Disney Animation Studios released throughout the 40’s that began production during World War II. Instead of being one consistent movie, it’s full of short films wrapped in a general narrative. However this one is different, in that I’m pretty sure they intended to release it this way before the United States fully entered the war. It serves both as a collection of short animated films, and a dramatized look at the behind the scenes process of making an animated film in the 40’s.

The overarching story is about a children’s book writer, Robert Benchley, is trying to sell a children’s book he wrote to the Walt Disney Corporation. He is reluctant however. His wife eggs him on until he finally agrees, and even after he arrives at the studio, he explores various parts of their animation process before finally meeting up with Walt Disney to pitch his book. While touring the studio, he learns about life drawing classrooms, where animators learn to exaggerate facial expressions on both people and animals. He learns about the voice acting process, and even meeting with the real life Clarence Nash (the original voice of Donald Duck). He learns about how they create some of the sound effects, while also getting a preview of the train from Dumbo (released four months later that year).

At one point he enters the camera room, where it shows how they emulated 3d environments back in the early animation days. Up to this point, the entire movie was in black and white, but after they introduce the Technicolor, the film is suddenly in colour. It’s an effective trick similar to that of The Wizard of Oz, capturing the magic of what was then very revolutionary filmmaking technology. It’s here where we also get a preview of Bambi, which released about a year after The Reluctant Dragon.

There are a number of animated shorts to break up the behind the scenes portions. There’s an amusing comedy sketch on how to ride a horse, featuring Goofy. That would later be released as a standalone short in Goofy’s “How To” parody series. There’s a short about a very intelligent baby that’s kind of neat, but nothing special. And of course there’s an animated adaptation of the real life children’s book, The Reluctant Dragon (by Kenneth Grahame). That short lasts about 20 minutes or so, making it the longest animated short in the feature by far.

Saying much more about this movie feels kind of pointless. It’s an interesting look into the animation process in the early days, but unless that’s a subject that interests you, this isn’t really worth watching. And if you’re not interested in the animation process, all of the short films can be seen elsewhere.

The Reluctant Dragon is rarely released on its own in its full feature form, and it’s usually only available through the Disney Movie Club when it is.  Usually they only re-release the shorts as part of various Disney short collections. However the full feature is available in HD as a bonus for the Adventures of Ichabod and Mr. Toad/Fun and Fancy Free Blu-ray set, which is still available online.

Next up is a film Disney made in co-operation with the United States Government as a pro-war propaganda film, Victory Through Air Power. After that, it’s the movie that the company is ashamed of, to the point where it’s never been released in its entirety on home video. We’re talking about Song of the South. I’m kind of afraid to watch it, but I won’t wimp out. Then it’s So Dear to My Heart, followed by a classic I haven’t seen since I was a kid, Marry Poppins.

There are a total of 14 movies to go through on this blogathon, so I’m probably going to do this in one lump. How long will that take? That remains to be seen, because I’ve got both my brother’s wedding later this month and NaNoWriMo in November. I’m also planning on some fiction writing this month to help warm-up for November. I hope to finish this blogathon by the end of the year though.

I am a relatively new comic book fan writing this blog for other new comic book fans and/or people who are interested in comics but don't know where to start. I've always been interested in writing, to the point where I have a college Creative Writing Certificate and I'm currently a year 2 Journalism student. I also have another blog where I mostly make fun of bad movies - www.healed1337.blogspot.com As for how I got into comics, I've always had a passing interest in superheroes: most notably Batman, Spider-man and the X-Men. Until February of 2011 (I think,) my only experience with any of these franchises came from the movies and video games. Shortly after I bought Marvel Vs. Capcom 3 however, I decided to check out X-23, Wolverine's female clone. I ended up reading her Innocence Lost origin story and enjoyed it. From there, I started reading various X-Men comics and it quickly exploded into my newest hobby. My other interests/hobbies include video games, movies, music, playing sports, my dogs and weird news.
View all posts by healed1337 →
This entry was posted in movie review, movies and tagged animated movie, animated short, animation, bambi, clarence nash, disney animation studios, disney associated movies, donald duck, dragons, dumbo, goofy, kenneth grahame, movie review, movies, robert benchley, technicolor, the reluctant dragon, walt disney. Bookmark the permalink.