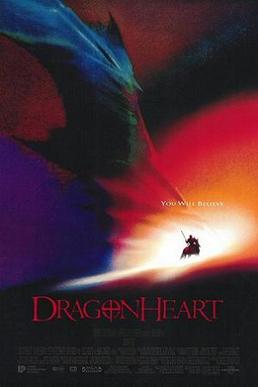 When I researched dragon movies for this list, I realized how few good dragon movies there are, and that’s a shame. Dragonheart is probably the most consistently high rated live-action Dragon movie I could find during my research, and it’s a movie I’ve heard of before. For a while I’ve kind of been on the fence as to whether I should watch this or not. Now that I’m writing a book called Dragonblood, and working on a dragon theme month for this blog, it’s about time.

Dragonheart stars the likes of Dennis Quaid as Bowen, a former knight/dragon slayer, Sean Connery as the voice of Draco, the last remaining dragon, David Thewlis as Einon, a tyrannical king, and Dina Meyer as Kara, a peasant who seeks revenge on the king for killing her father. It’s directed by Rob Cohen, in fact this is one of his early director roles. On the one hand, Quaid and Connery are both usually very good. On the other hand, Cohen has a very mixed filmography, his best being the silly yet entertaining xXx and the first movie in the Fast and Furious series. He also directed Stealth, a dreadfully stupid sci-fi action film, and The Mummy: Tomb of the Dragon Emperor, which pretty much ended what was an entertaining (if silly) action adventure series.

Going into this movie, I’ve heard a couple mixed opinions. A couple people I’ve interacted with love this movie, but there are others who find it forgettable at best. The critical reception is very middle of the road, with a 50% rating on Rotten Tomatoes and an average score of 5.7/10. In general, the critics praised the premise, the visual effects and the character development, but complained about the writing. The movie earned a nomination for Best Visual Effects at the Academy Awards, losing to Independence Day. It won the Saturn Award for Best Fantasy Film, and Connery won the Best Voice-Over Performance award from the Online Film & Television Association.

Although it wasn’t a massive success, it earned $115 million on a $57 million budget, earning a slight profit. It’s also done well on home media, becoming a bit of a cult classic in the time since its 1996 release. There have been several straight to video prequels and sequels, with Dragonheart: A New Beginning, Dragonheart 3: The Sorcerer’s Curse, and Dragonheart: Battle for the Heartfire. Dragonheart: Vengeance is scheduled for release next month. There are also efforts in place to remake the film, although there isn’t any news of one in development.

So I went into Dragonheart with no expectations whatsoever. I went into this movie hoping to enjoy it, but not expecting to.

I agree with the general opinion that this movie’s premise is great. Quaid’s character, Bowen, starts off the movie mentoring a Saxon prince, Einon. He hopes that his ideals will make Einon a better king than his tyrannical father. This king is killed in an ambush while suppressing a peasant rebellion, and Einon is mortally wounded. They ask Draco to save his life. Draco hesitates, but uses his magic to give Einon a piece of his heart, on the promise that Einon will rule with justice and virtue.

If anything, Einon is even more brutal than his father, enslaving rebels and forcing them to rebuild a Roman castle. Bowen, believing the dragon’s heart twisted Einon, swears vengeance on dragons and starts hunting them down.

First, let’s talk about what works about this movie. Connery is fantastic as Draco. He utilizes a lot of his natural charm to showcase the last dragon’s intelligence, his nobility and a sense of humour. The developing relationship between Draco and Bowen is very well written. It starts with a fight that Draco doesn’t quite take seriously, and ends with the two of them being best of friends, willing to die for each other. Despite being released in 1996 and the technology has improved so much since, the CGI for Draco has aged fairly well. The dragon’s facial expressions still work just fine.

While Connery clearly stands out with the acting, Quaid is also fairly good as the former knight/dragon slayer. He also did a great job with the sword fighting, as he rigorously trained for the role.

Sadly, the rest of the movie isn’t great. The soundtrack is often more cheesy than epic feeling, which does reduce the impact of the film’s action scenes. It’s still a good soundtrack – it just doesn’t fit the movie too well. Considering most of composer Randy Edelman’s previous credits are geared more towards comedies and kids films (like Angels in the Outfield, Kindergarten Cop and The Chipmunk Adventure), that’s not a huge surprise. Outside of Draco and Bowen, most of this movie’s characters are stereotypes at best. Dragonheart also feels like it was originally supposed to be much darker, yet Universal decided to dumb it down into more of a kid’s movie.

In fact, the story’s creator argued this as such. Writer Patrick Read Johnson even stated “I wanted this to be a more noble film than it ended up being … critical elements were missing, things were replaced, and there was all this silly stuff. Like this village that’s surrounded by 10 million pigs, but all the people are starving, and yelling out, ‘We’re starving! We need meat! Let’s kill the dragon,’ but they’re surrounded by pigs! So, I’m trying to find the logic here. I just don’t get that.”

He also felt that the script changes damaged Einon’s character. He wanted a quiet and confident villain with a sense of unpredictability. He knew he was immortal, and that made him fearless, at least until he realized that his fate was intertwined with Draco’s. Yet he felt the movie’s final script turned Einon into a brat who’s constantly shouting like a maniac, instead of a character who would start going crazy once he realized he could be in danger.

I like this movie overall. It’s got a charming story and equally charming main characters. But it feels like it could have been much more. I’m all for writer Johnson’s efforts to remake the film as the more serious, epic fantasy he intended Dragonheart to be. In fact, part of the reason there are so many straight to video prequels and sequels is that distributer Universal Studios also wants a remake, and they’re doing it to hold onto the rights. But in the meantime, we’ve got a fairly decent Dragonheart movie that could have been awesome, yet is still probably better than most dragon movies.

I’ll conclude this theme month with How To Train Your Dragon 2. Next month, I’ll look at all the Peter Jackson Hobbit/Lord of the Rings movies. I’ve still only seen Battle of the Five Armies once, and I’ve been meaning to see the Hobbit trilogy again, yet I’m also somewhat hesitant. Meanwhile, it’s been a few years since I’ve seen Lord of the Rings, and I’ve been meaning to watch them again. It’s about time.

I am a relatively new comic book fan writing this blog for other new comic book fans and/or people who are interested in comics but don't know where to start. I've always been interested in writing, to the point where I have a college Creative Writing Certificate and I'm currently a year 2 Journalism student. I also have another blog where I mostly make fun of bad movies - www.healed1337.blogspot.com As for how I got into comics, I've always had a passing interest in superheroes: most notably Batman, Spider-man and the X-Men. Until February of 2011 (I think,) my only experience with any of these franchises came from the movies and video games. Shortly after I bought Marvel Vs. Capcom 3 however, I decided to check out X-23, Wolverine's female clone. I ended up reading her Innocence Lost origin story and enjoyed it. From there, I started reading various X-Men comics and it quickly exploded into my newest hobby. My other interests/hobbies include video games, movies, music, playing sports, my dogs and weird news.
View all posts by healed1337 →
This entry was posted in movie review, movies, Uncategorized and tagged cgi, david thewlis, dennis quaid, dina meyer, draco, dragon movies, dragonheart, dragons, fantasy, fantasy movies, king einon, movies, online film & television association, patrick read johnson, randy edelman, rob cohen, saturn awards, sean connary. Bookmark the permalink.