Classic Masterpieces 2 – Gone with the Wind 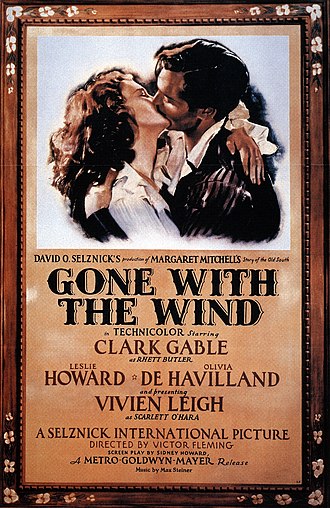 I’ve decided on the four movies I’m looking at this month, and of the four, this is the only one I haven’t seen before. Gone with the Wind is a very famous epic historical romance film. It was immensely popular when it first released, it set multiple records at the Academy Awards, and it held the record for the highest earning movie for 26 years. Adjusted for inflation, it’s still the highest earning movie in history.  It’s often counted among the greatest films in all time.

Like a lot of classic films, Gone with the Wind faced a number of production difficulties. It’s based on a novel of the same name, written by Margaret Mitchell, released in 1936. The book ended up being the top fiction seller in 1936 and 1937, and as of 2014, a Harris poll found it to be the second favourite book in the United States, only behind the Bible. Over 30 million copies of the book have been printed. You’d think such a popular, well received book would be picked up quickly, but several studios turned it down. In Warner Bros’s case, their biggest star, Bette Davis, was uninterested. 20th Century Fox wanted the story, but they didn’t offer enough money for the project. Eventually, Selznick International Pictures bought the rights for $50,000, after initially turning it down.

The casting took nearly two years. Selznick Pictures wanted Clark Gable for the role of Rhett Butler from the start, but Gable was under contract to MGM, and they never loaned him to other studios. Gary Cooper was considered, but Goldwyn wouldn’t loan him out from his contract either. Eventually, MGM offered to let them have Gable in exchange for distribution rights. Gable ended up with $1,250 million for his role, which was half of the movie’s projected budget. The search for the female lead, Scarlet O’Hara, led to over 1,400 interviews and auditions. They eventually landed on Vivien Leigh. On top of that, the original director, George Cukor, was fired shortly after filming began. They hired Victor Fleming (The Wizard of Oz) to take over. Even he needed a break for exhaustion, so he was briefly replaced by Sam Wood (Goodbye, Mr. Chips, and The Pride of the Yankees).

Selznick was able to use these delays to refine the script, and also build up publicity for the film.

Released in December of 1939, Gone with the Wind was immediately successful. Reviews were generally very positive, with the main complaints being about the movie’s length. If you include the overture, intermission, entr’acte and exit music, it’s 2 minutes short of 4 hours. The New York Times best summed up the general sentiment by saying it was the most ambitious film production made at the time, but it probably wasn’t the greatest film ever made. The review stated the film was an “interesting story beautifully told.” The Nation stated “The result is a film which is a major event in the history of the industry, but only a minor achievement in motion-picture art.”

It was acknowledged as being very faithful to the novel, but they also noted this as part of the reason it was so long. Variety said that the movie “left too much in”. The review said that the movie would have benefited from trimming down repetitive scenes and dialogue. A number of critics also found the second half of the movie weaker than the first, as the first focused more on the Civil War.

The movie was also controversial among the black community. Some saw it as glorifying slavery, or as a “rear attack” on American history and black people, in the way that “The Birth of a Nation” was a “frontal attack.” However opinion was split on this matter, as a number of people praised Hattie McDaniel’s performance as Mammy the house servant, who is portrayed as a warm and witty caretaker. She ended up becoming the first person of colour to win an Academy Award for her performance, taking Best Supporting Actress.

The movie broke audience records everywhere. At the Capitol Theatre in New York alone, it averaged 11,000 admissions per day for the first month, and it sold an estimated 60 million tickets in the first four years across the United States. That was equivalent to just under half the country’s population at the time. By the end of its initial run, it earned $32 million worldwide on a $3.85 million budget. Its 1947 re-release was the 10th highest earning movie of the year, and other re-releases in the 50’s and 60’s also performed very well. In fact, its 1967 road show re-release was the most successful re-release in the history of film, earning another $68 million, making it the second highest earning movie of the year (behind The Graduate). In total, the movie has earned over $390 million. Adjusted for inflation, it’s earned $3.7 billion (Avatar has earned $3.2 billion adjusted for inflation, and Titanic sits at $3.08 billion).

As for my own thoughts on the movie, well … at least in some ways I agree with the initial critical response. It’s a bit too long for my tastes, and the old fashioned style of storytelling doesn’t work for me as well as it would for some. Don’t get me wrong, I did enjoy the movie overall, and I can tell that it’s well made. But apart from a handful of well delivered lines and some great acting from the three actors I mentioned, nothing really stood out for me. The movie often feels overly long, and it probably would have worked just as well with a full hour cut out of it. With that said, unlike the critics at the time, I actually preferred the second half of the movie over the first half. I felt that the movie dealt with the aftermath of the Civil War better than the war itself, not to mention the character drama worked better for my tastes.

But that’s just my personal taste. If you’re a fan of classical film, this is definitely worth seeing at least once. If you’re not, then I wouldn’t recommend it. Will I watch it again? Probably not, but I’m glad that I finally saw it.

This line was fairly controversial in its day – movies rarely featured
any kind of foul language back them.

Next up is Casablanca. After that, I’ll wrap this month up with the other movie that’s earned 11 Academy Awards, Ben-Hur. That’ll mean in  three months, I’ll look at all three movies to share the record for the most Academy Award wins, in reverse order of release. Next month, I’ll start looking at all of Disney’s live action remakes. I talked about a couple of them in my first Disney blogathon, but never in detail, and I’ve written about none of the remakes made since. And yes, some of these blog posts will be very critical.

I am a relatively new comic book fan writing this blog for other new comic book fans and/or people who are interested in comics but don't know where to start. I've always been interested in writing, to the point where I have a college Creative Writing Certificate and I'm currently a year 2 Journalism student. I also have another blog where I mostly make fun of bad movies - www.healed1337.blogspot.com As for how I got into comics, I've always had a passing interest in superheroes: most notably Batman, Spider-man and the X-Men. Until February of 2011 (I think,) my only experience with any of these franchises came from the movies and video games. Shortly after I bought Marvel Vs. Capcom 3 however, I decided to check out X-23, Wolverine's female clone. I ended up reading her Innocence Lost origin story and enjoyed it. From there, I started reading various X-Men comics and it quickly exploded into my newest hobby. My other interests/hobbies include video games, movies, music, playing sports, my dogs and weird news.
View all posts by healed1337 →
This entry was posted in Uncategorized and tagged academy award, american civil war, capitol theatre, civil war, clarke gamble, classic masterpieces, classic movies, george cukor, gone with hte wind, hattie mcdaniel, historical fiction, mammy, margaret mitchell, mgm, mgm studios, movie review, movies, new york times, rhett butler, romance, sam wood, scarlet o'hara, selznick international pictures, the nation, victor fleming, vivien leigh. Bookmark the permalink.

6 Responses to Classic Masterpieces 2 – Gone with the Wind