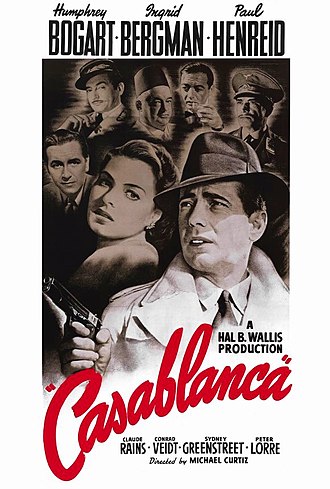 Of the classic films I’m looking at this month, this is the one I’ve seen the most, and is probably also the first classic masterpiece I watched out of the four of them. Released in 1942, it’s mostly a romantic drama film, but it’s deeply set within World War II. The story includes elements of the Resistance movement, a touch of gangster activity, and the SS interfering with the main character’s bar.

I’m not sure how well known this is, but Casablanca is actually based on a then unproduced play, written by Murray Burnett and Joan Alison in 1940. The play was anti-Nazi and pro-French Resistance, before the United States officially entered the war. Burnett and his wife, Frances, travelled to Vienna in 1938 to help their Jewish relatives smuggle money out of the country, which was occupied by Nazis since March of that year. They later visited a small town in southern France, where they went to a nightclub overlooking the Mediterranean Sea. A black pianist played jazz for a crowd full of French citizens, Nazis, and refugees. This served as the main inspiration of the play, of which Alison collaborated with him on. It was optioned to go into production, but there was resistance to a particular plot threat that could have been interpreted as Lois (Ilsa in the movie) sleeping with Rick to get letters of transit.

When they failed to find a Broadway producer, they sold the play to Warner Brothers for $20,000, then a record for an unproduced play. Especially for unknown writers, one of which mainly worked as a teacher. Warner Brothers soon gave the script to a team of writers to adapt into a movie. Twin brothers Julius and Philip Epstein worked on the overall structure and dialogue, Howard Koch focused on the politics of the story, and Casey Robinson focused mainly on the romantic pairing of Rick and Ilsa. Robinson ended up without a writing credit.

The play writers didn’t get nearly enough credit for the movie for years. In fact, lead actress Ingrid Bergman wasn’t even aware that the movie was adapted from a play as late as the mid 1970’s. The writers eventually sued Warner Brothers for royalties, after they aired a TV series based on the movie. The courts first determined that they sold all rights of the movie to Warner Brothers, but with the copyright about to revert to them in 1997, they threatened not to renew their agreement. Warner Brothers paid them each $100,000, and gave them the right to produce the original play. This didn’t mean much considering Murray died months later, and Alison had already passed away.

Anyway, Casablanca is often regarded as one of the greatest films of all-time, and unlike Gone With the Wind where a number of people debate its status, there is little debate over how good a movie Casablanca is. The movie was well-received upon its release. It won 3 Academy Awards out of 8 nominations (Outstanding Motion Picture, Best Director, and Best Writing, Screenplay). Like Citizen Kane however, it probably deserved more than it won. As much as the main cast was previously known, the movie turned out to be Humphrey Bogart’s breakthrough performance, turning him into a super star. In 1999, the American Film Institute even declared him the greatest male star of classic American cinema.

Bogart plays Rick, the owner of an upscale nightclub and gambling den. Although he declares himself neutral in the war, he does have a past of gunrunning in Ethiopia and fighting in the Spanish Civil War. He’s fantastic as a generally cold businessman with an alcohol problem, but shows a soft side when he needs to. Bergman plays Ilsa, in what many consider to be her most famous and enduring role. She’s a former lover of Rick’s until she disappeared when they were supposed to flee Paris together. She puts in a brilliant dramatic performance with a lot of subtlety. Paul Henreid plays Victor Laszlo, a member of the Czech Resistance, who also happens to be Ilsa’s husband. His performance is probably the stiffest of the three, but that’s intentional and it works for the character.

It’s also worth noting that a lot of the movie’s extras were played by actual European exiles and refugees, in addition to some of the minor character actors. There’s one particular scene in the movie, the “duel of the anthems”, that got a bunch of the actors and extras crying a bit. It makes an already brilliantly done scene even better, knowing that a lot of the emotion on screen is genuine.

The movie was originally slated for release in 1943, but they rushed the movie into theaters in November of 1942 after the United States officially joined the war.

This really is a brilliant movie. I’m generally not a fan of the love triangle, especially when the romance is one of the main focuses of a movie, but it works here. It’s a love triangle that only happened because Ilsa believed her husband to be dead. I won’t say anything beyond that, because the slow reveal of her motivations is part of what makes this movie work. Rick and Ilsa do manage to rekindle some of their relationship after she shows up in Casablanca, but Rick is forced to decide whether he wants to be with her, or help her escape with her husband. The added threat of getting in trouble with the Nazis and the Vichy-French government doesn’t make his decision any easier. The way the love triangle integrates itself into a plot filled with intrigue, conspiracies and a potential expansion of the resistance, makes it all the more compelling.

This movie isn’t perfect. Some of the minor character performances are mediocre. As much as the key plot and romance dialogue is very well written, the writing isn’t always great. But overall, this is a brilliantly done movie. The cinematography uses angles, shadows and lighting effectively. The three lead actors are all brilliant in their roles. The movie is full of very quotable lines, most notably “here’s looking at you, kid.” The plot is strong enough to recommend this to people who aren’t normally fans of romance, while the romance itself is very well told. The movie makes itself a very strong case for being the best movie released in the early sound era of filmmaking. I would recommend this to almost anyone.

Sometime this week, I’ll wrap up the month with Ben-Hur, the first movie in history to earn the standing record of 11 Academy Awards. Next month, I’ll begin looking at all of the live action Disney remakes. Although some of these remakes are good, most are disappointments compared to the original animated features. I look forward to giving the worst of the remakes the thrashing they deserve.

I am a relatively new comic book fan writing this blog for other new comic book fans and/or people who are interested in comics but don't know where to start. I've always been interested in writing, to the point where I have a college Creative Writing Certificate and I'm currently a year 2 Journalism student. I also have another blog where I mostly make fun of bad movies - www.healed1337.blogspot.com As for how I got into comics, I've always had a passing interest in superheroes: most notably Batman, Spider-man and the X-Men. Until February of 2011 (I think,) my only experience with any of these franchises came from the movies and video games. Shortly after I bought Marvel Vs. Capcom 3 however, I decided to check out X-23, Wolverine's female clone. I ended up reading her Innocence Lost origin story and enjoyed it. From there, I started reading various X-Men comics and it quickly exploded into my newest hobby. My other interests/hobbies include video games, movies, music, playing sports, my dogs and weird news.
View all posts by healed1337 →
This entry was posted in movie review, movies and tagged academy award, american film institute, casablanca, casey robinson, classic masterpieces, classic movies, czech resistance, france, frances burnett, french resistance, howard koch, humphrey bogart, ilsa lund, ingrid bergman, joan alison, julius and philip epstein, morocco, movie review, movies, murray burnett, nazis, paul henreid, rick blaine, second world war, vichy-french, victor laszlo, warner brothers, world war 2, ww2. Bookmark the permalink.