It was a year ago today when I moved into my first house. I’ve shared several posts in the past about the experience of buying a house, how it’s affected my maturity, and other things. Instead of repeating any of that, I’ll link to all the previous Adventures in Home Ownership below.

1-Year Anniversary of Signing the Deal

The last few months have been weird. February had a lot of bad weather, meaning I couldn’t really travel home that often. Most of my closest friends live in my home town, and one in particular lives over an hour away now. At the same time, I don’t really know too many people in my new town outside of work. Being a shy person does have an effect on that, although at least from my perspective, I’ve made a couple of good friends at work.

And then this whole virus situation happened.

Financially, I’ve been fine. If anything, I actually have more money saved up than I did two months ago. But my place of work shut down for a couple of months because of the virus, leaving me at home for most of that time. With all the public pools shut down, my gym closed, and the fact that my parents are taking care of my 89-year-old grandmother meant that I barely saw anyone for the entire month of April. I was much closer to a state of depression in my early 20’s, but spending almost an entire month without seeing anyone I personally knew was easily the loneliest month I’ve ever had. That had a serious effect on my motivation level to get anything done in the house.  At least, besides the bare necessities.

Furthermore, because I wasn’t sure about what my financial situation would look like at first, I didn’t spend any money on furniture. I actually need more furniture to finish unpacking a lot of the stuff I’ve still got in boxes. A display unit would be nice for one. I could also use some additional shelves here and there. So despite being at home alone for almost two months straight, I unpacked a total of three boxes. Financial concerns also meant I’ve delayed installing central air conditioning until at least this fall.

There were a handful of people who helped with my loneliness, like regular online game nights with said friend who lives over an hour away, a couple of people who were willing to have weekly voice chats, and a number of others I texted back and forth with. Having virtual game nights with several groups of friends also helped. If any of these people are reading this, I sincerely thank you.

The month of May was easier, at least partly because I actually saw my parents quite a bit. I stayed over at their place for Mother’s Day. They came here twice that following week. But even then, I’ve always needed a balance between being around people and getting alone time, and I got way too much alone time even in May.

Thankfully I went back to work last week. Even though it wasn’t in my usual department and the person I worked with the most didn’t exactly speak very good English, it’s nice to finally have some sort of responsibility again. I got along fairly well with that department’s lead, which is generally a good sign that they appreciated my efforts. This coming week I’m back in my usual department, and despite the 6:30 am start, I’m glad to be back.

Despite the lack of progress in my house lately, I feel it’s still worth posting some comparison photos. Below are some of the pictures I posted when I first moved in, beside what that same space looks like today. Just be aware that there are a few things that are messier than I would like, and under normal circumstances, they’d be much cleaner. 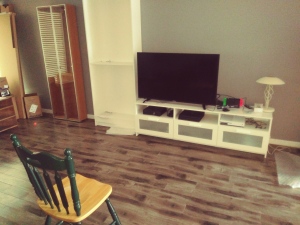 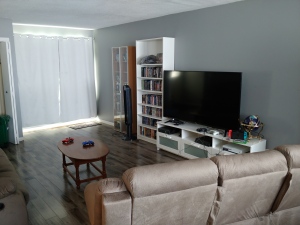 (Took nearly 2 months for those couches to arrive, despite buying them a month before I moved. Also yes, that is a bigger TV in the second picture – 65 inch vs 50.)

(Most of my unpacked boxes are still in this room, but this will eventually be a guest room) 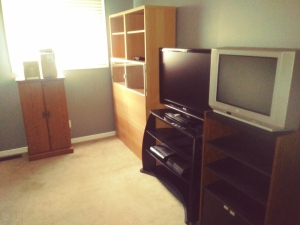 (This is the games room. Not much else to add, other than I can change the light colour with an app on my phone, and the same goes for three of the lights on the main floor.) 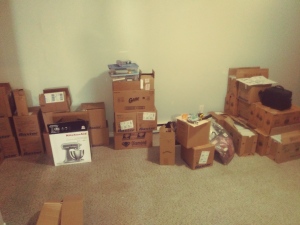 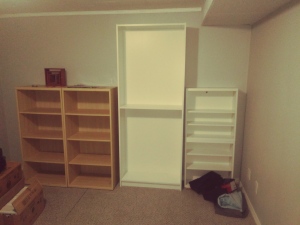 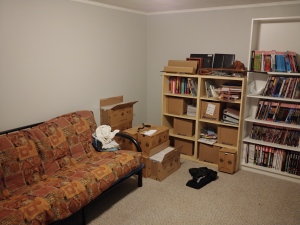 (I could still use a bit more furniture for those “magazine” boxes, but the basement is mostly complete. I’m considering switching the games room and the library room around, so that there is more room for the games, and that I could use the library room as an additional guest room.)

I wish I had a couple pictures of what the main bedroom looked like early on, but I guess I forgot to take them. So let’s just skip that room for now.

The walls are still kind of bare, but I plan to start changing that over the next year. Also planning on replacing all of the floor boards on the main floor. Not only are they old, but half of them don’t even match with the other half. I also haven’t posted any pictures of the main bathroom because, well … let’s just say it’ll be the first room that will get a full renovation. Don’t get me wrong, it’s functional and it smells just fine after it’s cleaned up, but there are a number of stains that are pretty much irreversible.

The only other thing I’m going to mention is that right now, there’s a townhouse across the street from mine that’s up for sale. It’s about 250 square feet smaller than mine, doesn’t have a garage (mine does), and yet they’re asking $40,000 more than my place’s asking price was a year ago. Kind of makes me feel glad that I bought this place when I did, and considering I have fixed this place up at least a little bit, I’ve probably already gained money on this place overall.

I’m not yet sure if I’m going to continue doing these Home Ownership posts or not, but they’ll probably be less frequent if I do. Also I’m not going to talk about my thoughts on the virus, because I’m sick of hearing about it in general. Pun intended. That and I never meant for this blog to be anything about current world events, politics or anything of the sort. This is mostly an entertainment blog, with a handful of personal posts to mix it up.

I am a relatively new comic book fan writing this blog for other new comic book fans and/or people who are interested in comics but don't know where to start. I've always been interested in writing, to the point where I have a college Creative Writing Certificate and I'm currently a year 2 Journalism student. I also have another blog where I mostly make fun of bad movies - www.healed1337.blogspot.com As for how I got into comics, I've always had a passing interest in superheroes: most notably Batman, Spider-man and the X-Men. Until February of 2011 (I think,) my only experience with any of these franchises came from the movies and video games. Shortly after I bought Marvel Vs. Capcom 3 however, I decided to check out X-23, Wolverine's female clone. I ended up reading her Innocence Lost origin story and enjoyed it. From there, I started reading various X-Men comics and it quickly exploded into my newest hobby. My other interests/hobbies include video games, movies, music, playing sports, my dogs and weird news.
View all posts by healed1337 →
This entry was posted in update and tagged adventures in home ownership, blog update, home ownership, update. Bookmark the permalink.