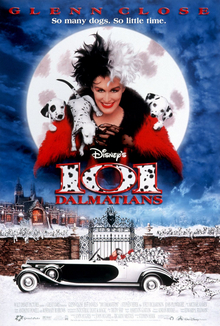 One Hundred and One Dalmatians was the second last animated movie Walt Disney released before his death in 1966. Between this and The Sword and the Stone, most people tend to agree that this is the better one. It also helped pull the Disney company out of financial troubles after Sleeping Beauty failed to earn money at the box office (it has since earned the company money, but flopped in its initial release). It also happens to be one of the movies that received a live-action remake long before their current trend of seemingly remaking everything. That in itself makes this particular remake refreshing.

101 Dalmatians, released in 1996, carries a very different tone from the original movie. The original movie is a decent adventure story with a bunch of added cuteness with the puppies, and a fantastic villain with Cruella de Vil. The movie takes its tone fairly seriously, and although it’s never too intense for children, it does get kind of tense at times. 1996’s 101 Dalmatians is more of a comedy. In fact some of the comedy is reminiscent of Home Alone. Considering John Hughes is one of the producers behind this movie, it’s easy to understand why. The other major difference is that, unlike the animated original, the dogs don’t talk in this one. Apparently some people were upset by this, but considering how the dogs look when they talk in 2019’s Lady and the Tramp, I’d say it’s a good thing they stayed away from that in the mid-90’s.

(I couldn’t find many gifs from the movie,
so I’ll include a couple video clips from YouTube instead.)

There doesn’t seem to be all that much information about this movie’s production, which is unusual for Disney produced movies. But this was a live-action release in the mid-90’s, when most of their behind the scenes focus went towards their animated projects. People take behind the scenes information much more seriously these days. What we do know is that Sigourney Weaver was offered the role of Cruella de Vil, but turned it down. Cathy Moriaty screen tested for the role, but she was deemed too frightening for a children’s film. The movie was fairly successful though, earning over $320 million on a $75 million budget.

The cast includes Jeff Daniels as Roger Dearly, the male owner of the Dalmatians. In the original, Roger was a songwriter. In the remake, he designs video games, and is struggling to sell a game he’s been working on for an unknown amount of time. I remember really enjoying this change as a kid, being obsessed with video games at the time. These days, I still think it’s a neat idea, but I also realize it generally takes more than one person to develop a video game – especially one with the animation quality show in the game footage within the movie. Although his role is blandly written, he does a good job with the material he’s given.

Anita is played by Joely Richardson, and like Daniels, she’s perfectly fine in the role. Unlike Roger, her role is very similar to the original. However instead of Cruella being a former schoolmate of hers, she actually works as a designer and concept artist for Cruella’s fashion company. It’s a neat addition, but for the purposes of the story, their connection works pretty much the same. You’ve also got Joan Plowright working as Roger and Anita’s nanny. She seemed to play a lot of motherly figures around the time (also played Mrs. Wilson in the 1993 Dennis the Menace movie), and she was good at them. She’s now retired from acting, but is still alive at 90. Hugh Laurie (Blackadder, Dr. House in House) and Mark Williams (Arthur Weasley in the Harry Potter films) play the thieves, and they’re entertaining as the “smart” thief and the bumbling buffoon. John Shrapnel is mildly creepy as the mute Mr. Skinner, and you get the impression he could have taken the role much further if he wasn’t limited by being a children’s film.

All of these actors do a good job with the material they’re given, but none of their roles are spectacular. The real highlight here is Glenn Close as Cruella de Vil. She brings the cartoonish villain to life in a way that never gets old. She’s delightfully over-the-top and insane. Her over the top laughs are very entertaining, as is her clear pride in her looks and accomplishment. She nails the look perfectly. As much as the movie is competently made, it wouldn’t be half as good without her performance.

The movie received mixed reviews upon release, with a 42% on Rotten Tomatoes and an average score of 5.33/10. Most critics agreed that Close was the movie’s real highlight, and the movie was otherwise kind of bland. However it scored very well with audiences, earning an A on CinemaScore. I also remember the movie being fairly popular among friends, and there were several times we’d all watch it together.

Looking back on the movie now, I get both general perspectives. The slapstick comedy mixed with the cuteness works really well on kids, including my 10-year-old self, but it’s nowhere nearly as entertaining for an adult. The puppies do add a touch of cuteness to the movie, but it all feels kind of manufactured. You can recognize all the camera tricks being used to show animal reactions and intelligence. Aside from a really neat trick with this one dog swinging a bag over his back and then walking on his hind legs to imitate the robbers, it all appears to be a lot of heavy editing combined with simple dog tricks. I did still enjoy rewatching this movie out of a sense of nostalgia, but unless you saw it as a kid, I wouldn’t recommend it.

Disney is working on a prequel to this movie, with Close working as a producer. As of now, Emma Stone will play Cruella in her story of how she became a villain. I don’t see the appeal of a prequel – Cruella is more interesting when you don’t know about her past. It’s currently planned for a 2021 release.

Next up is the Jungle Book remake, which is pretty much universally considered an improvement over the original. That’s a sentiment I agree with, and I look forward to writing about it in detail. Although it’s not really a remake, 2018’s Christopher Robin will be next, as it is a Winnie the Pooh related movie. Then we skip all the way to the Renaissance era with the live-action Beauty and the Beast remake. Oh boy am I going to rip into that one. As of right now, there are only two movies after Beauty and the Beast, although there are several remakes that are supposed to release some time this year.

I am a relatively new comic book fan writing this blog for other new comic book fans and/or people who are interested in comics but don't know where to start. I've always been interested in writing, to the point where I have a college Creative Writing Certificate and I'm currently a year 2 Journalism student. I also have another blog where I mostly make fun of bad movies - www.healed1337.blogspot.com As for how I got into comics, I've always had a passing interest in superheroes: most notably Batman, Spider-man and the X-Men. Until February of 2011 (I think,) my only experience with any of these franchises came from the movies and video games. Shortly after I bought Marvel Vs. Capcom 3 however, I decided to check out X-23, Wolverine's female clone. I ended up reading her Innocence Lost origin story and enjoyed it. From there, I started reading various X-Men comics and it quickly exploded into my newest hobby. My other interests/hobbies include video games, movies, music, playing sports, my dogs and weird news.
View all posts by healed1337 →
This entry was posted in movie review, movies and tagged 101 dalmatians, anita dearly, dalmatians, disney, disney movies, disney remake, disney remakes, dogs, glenn close, hugh laurie, joan plowright, joely richardson, mark williams, movie review, movies, one hundred and one dalmatians, roger dearly. Bookmark the permalink.